It turned out to be a good weekend for winter listing. On the Saturday Ken Knowles and I did the Avalon Loop counter clockwise.  The simple aim was Ruddy Turnstone at Pt LaHaye - the only place we know they overwinter annually in the province.  It was a clear very windy day. But before thhe wind got up we pished in a MARSH WREN in the marsh at St. Mary's.  This is a big winter list bird.  There are only a dozen or so records for the province and only one other in December.  The rest of the day was lackluster and a battle against the wind and bright light. But other new winter list birds were a nice adult drake King Eider at Pt La Haye, Common Grackle at St. Vincent's, Wilson's Snipe at Cappahayden and Northern Shrike at Renews.  The quarenteed winter tick Ruddy Turnstone didn't pan out - maybe later in the season.
Sunday dawned beautifully calm. It was the calm before an afternoon rain event. It was my chance to check for warblers in the historically rarity rich Waterford Valley, which is right outside my front door. Walked for 3.5 hours in the valley. Had plenty of bird action but the only warbler was a Common Yellowthroat.  This is a surprisingly rare December bird compared to other warblers like Black and white, Yellow, Yellow-throated etc which are much much more numerous.  It was in the same place where John Wells had found it three weeks earlier. 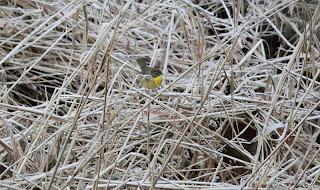 The blackish ear coverts make this an immature male Common Yellowthroat on the banks of the Waterford River in St. John's.
In the afternoon rain while doing the rounds about town John Wells phoned wondering if I'd seen the post by David Smith about rediscovery of the PINK-FOOTED GOOSE on Cox's Lane in the Goulds!! I had just been there looking around for the goose I assumed was gone having not been seen since 20 Nov! I pulled a u-turn and headed back to the Goulds. While on Old Bay Bulls road I stopped to see what was sending a massive flock of starling into a frantic gyrating swirl. I still needed goshawk for the winter list. The bird I saw come out of the swarming starling flock was big enough but the neck was a little long - it was the goose! There is only one goose in town. It circled over at large field, glided on set wings and chose a spot not 50 m from me already parked on the side of road. I was a bit surprised but how bright the upper wing coverts were so looked at the bill just to make sure it wasn't a Gray Lag! The candy pink and black bill confirmed it was a familiar friend.

It was a dark wet December afternoon light in low cloud. It is rarely ideal conditions for the photography of a rare bird. The goose was acting very wary holding neck high looking for the slightest excuse to fly. There was a fairly steady stream of cars traveling past me. It didn't seem to notice me in the car with a window open. I clicked off lots of pictures trying various setting to combat the dark light. ISO 1000 was the order of the day. The goose grazed on the green grass. It walked over to four crows digging about in the field. For a goose it is a fast walker. Sometimes it sat on its belly while grazing or just sat still resting. It was always looked around. It was during a rest period it decided to move to an adjacent plowed field off Pearltown Road. I drove around to get closer. It was not easy to see against the brown dirt of the field. Again it walked over to where a few crows were feeding. Then it decided to fly again. I wasn't ready with the camera when it flew for it came right at me and went over the car. Looked great in binos but would have been better capture digitally. It flew far and seemed to go down in some fields some ways back. I couldn't relocate it.

That was the end of the story for the day but not likely the end for this bird. Will it ever leave? When real winter sets in will it show up at QV Lake and be forced to beg for food handouts with the rest of the ducks. It is such a beautiful goose to have with us. It is very agile and fast on the wing. It even walks fast. Look forward to getting to know this bird intimately.﻿ 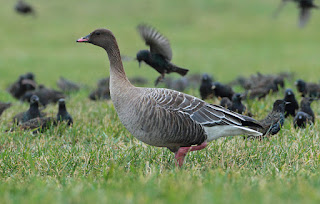 Here is the Pink-footed Goose surrounded by some of the only friends it will find in a one goose town. 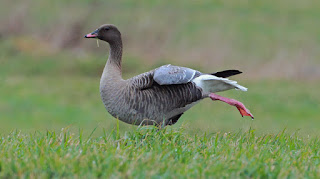 The Pink-footed Goose showing off its left foot.﻿

As I turned to go home a small raptor shot across a field and landed on a post – female Merlin.  Maybe this was the cause of the starling panics.  New for the winter list – one I often miss. 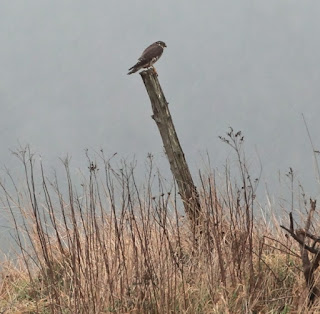 A large brown female Merln shot through a cabbage field full of juncos then landed on this post.  Merlin is an easy to miss winter list bird.
﻿
The Winter List Score as of 9 Dec 2012
BM (97), Tingley (93)