I eat my lunch at my office desk well before 12 noon so I can use my lunch hour for birding and not eating. There was a blasting rain with a dramatic warm insurgence of near sub-tropical air. The temperature had risen from 0 C to +14.2 C during the period 7 am to 12 noon. What to do with my time. How about drive around to city recreational ball fields and peer out a crack in the window at gulls looking for that missing since last winter, Yellow-legged Gull. After several LBBGs in a couple of half flooded soccer fields, I ended up at the Pier 17 sewer outflow. There were no ships tied up so had no problem being there. Huge wind keeping the gulls airborne over the upwelling. Parked by the wharf edge. Noticed the gulls were whipping by the side of the wharf at close range. Taking photos of gulls in bright light and dull light is an uphill battle. In the very dark wet light I knew the darkness of the grays and brightness of the whites would be exaggerated going off in opposite directions from perfection and creating an impossible situation that even the most expert Photoshop guru could not fix. That didn't stop me. Using my utility lens, the excellent 300mm f4, I cranked off the shots of gulls moving like kites tied to short string in the gale.
This evening it has been easy to delete 95% of the photos without a second thought. The autofocus was not doing well catching the rapidly moving birds in the dull light. Among the 750+ Iceland Gulls and 75 Black-headed Gulls attracted to the 'bubble' were two Common Gulls. Both were adults and both were known to be around for a few weeks. The age of one bird I was unsure of until seeing it in flight for the first time today. It was indeed an adult and not a 2nd winter. Its bill is just like a 2nd winters' in being dull green with a fairly broad band and hardly brighter tip. From previous views on other days I knew the legs were also dull, dirty green like a 2nd winter, I also knew the bird was banded with a metal band on the left leg. As it happens a 2nd winter Common Gull was banded by CWS in St. John's last winter in St. John's. Was this the same bird returning? Well there is nothing to indicate otherwise until we read the band. The possibility of knowing the age of this bird adds an interesting insight into the plumage of this bird. The legs and bill are identical to a 2nd winter bird but the wings tip pattern is very adult-like. Well almost, inspection of photos shows a dark centre to one feather in the alula on both wings. It was visible on several photos. This probably confirms this is actually at 3rd winter Common Gull [nothing is firm in the world of gulls]. Normally this age is probably indistinguishable from an adult. This individual was perhaps slowed down in its development after spending last winter in St. John's where nutritional needs were probably marginal. 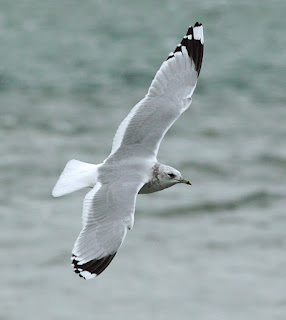 The dark spot in the alula visible on both wings along with the dull bill and dull green legs (viewed previously) support the idea this is probably a 3rd winter Common Gull. 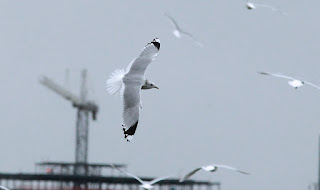 Another view of the same Common Gull circling against the growing St. John's skyline. 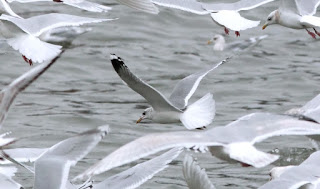 The other Common Gull. This being a classic adult and still not yet in classic winter plumage.  The bill and legs are still on the bright side of yellow. 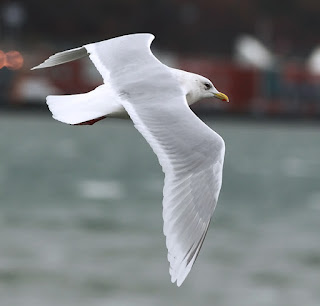 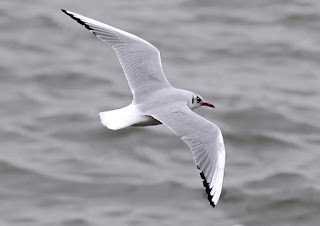 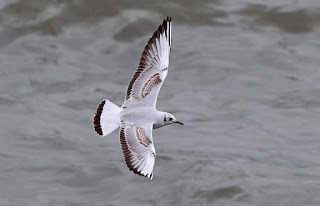