On Friday evening the 2nd of November 2018 Shawn Fitzpatrick and Karen Mercer came across an apparent Great Blue Heron at Renews, Avalon Peninsula.  Great Blue Herons being rare on the Avalon with most appearing in spring and summer was quite unexpected in November.  Both Shawn and Karen took photos in the failing dusk light.

The photos were circulated Friday evening.  The photos were very grainy at high ISO  required due to the dark conditions but they showed features that were nothing but full of promise for GRAY HERON.  Claiming a bird of that rarity magnitude requires more than a 99% looking good to be confirmed.

The next morning I was there way too early in the dark.  Finally a crow cawed and a kingfisher rattled. The world was waking up. I set the scope up on a point where I could view most of the nooks and crannies of the inner part of the Renews harbour.  I was on my third careful scan of the shoreline when I saw the heron neck sticking out over some shoreline rocks about 100 m away.  I liked what could be seen. The tact sharp black marks on the pale gray neck were ideal. I waited a couple of minutes for it to round the point of rocks that were hiding its legs.  It turned the corner walking my way revealing its silky white thighs with each stride. It should not have been a surprise considering all the supporting evidence leading up to this moment but it was a euphoric moment to see for sure that it was a GRAY HERON.

I enjoyed the scope views for a few minutes before sounding the birding alarms. It was a dark overcast drizzly November morning.  How was I going to get photos of this bird before the crowd got here. I noted where the bird was heading along the shoreline. If I could get over to the 'dyke' before it did I could wait in my car with camera ready for it appear. I got there just a bit too late.  Its head poked over the grassy ridge just as I was in position and about to turn off the engine.  It froze and I froze.  The bird was far too nervous even at that range.  I felt it was going to fly and it did. It flew across the harbour. 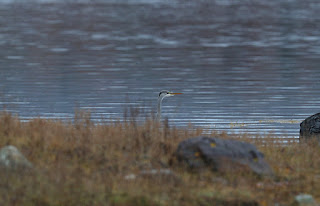 The first picture. The Gray Heron noted my presence over a grassy ridge.

Meanwhile, Alison Mews and Ethel Dempsey arrived. Together we drove to the other side of the harbour to look for the bird. Driving across the gravel beach to get to a back cove we realized the bird was 'right there'!!! Nothing we could do. The bird spotted us before we saw it.  Again it flew across the harbour.  Okay, so this bird was showing its European roots in being extremely wary as most European birds have evolved to be to avoid being eaten. Following the bird around the harbour was not going to work. It would take a different approach.  Waiting for the bird to come to you was the only way.  Meanwhile more birders and photographers arrived. Chasing the bird back and forth across the harbour was the name of the game.  One could get great views of the Gray Heron through a scope.  Even good binocular views were not that great. Good photo opts were near impossible with the chase until it flushes routine.

My Plan B was park the car on the dyke and wait for the bird to be flushed from somewhere else and hope that it would land in front of me.  Miraculously that worked almost immediately. The bird was so close I was afraid to click on the camera until it turned around so I could see it front on. It did that more or less. It was standing in deep water hiding part of the patented silky white thighs. The dark light was still so bad I had to use ISO 3200.  The bird was not alarmed by the madly clicking camera as it stalked small sculpins in the shallows. It paid no attention to my bright blue car on the brown and gray dyke. I knew it was going to happen but the sound of crunching gravel beneath car wheels creeping out on the dyke came too early  The heron heard it too. It became alert and yup flew back across the harbour.  I felt blessed with that three minutes of intimacy with the GRAY HERON. 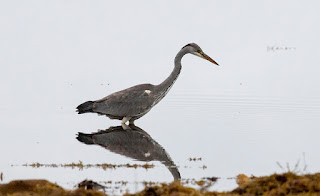 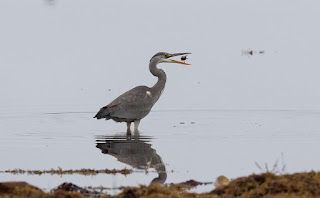 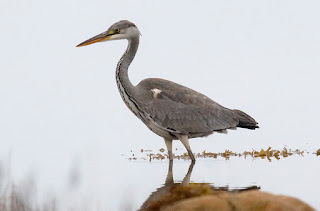 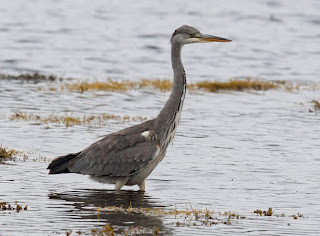 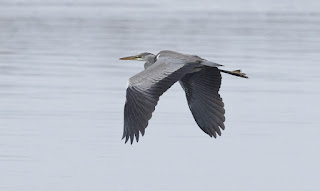 Some have wondered if the Gray Heron on the Grand Banks on 30 Sept 2018 could be the same bird as Renews on 3 Nov 2018. They are not. The Grand Banks bird had less brown in the back (scapulars) and finer more neatly patterned black neck streaking. In these comparison photos below there are details in the bill that prove the difference.  The Grand Banks bird showed dull colours with the upper mandible showing a pale tip and an intrusion of orange along the cutting edge at the midway point. The Renews birds shows a uniform dark upper mandible right to the tip and brighter more intense orange-yellow lower mandible. 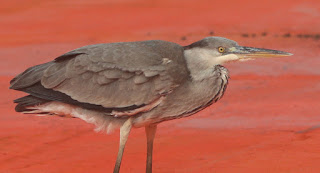 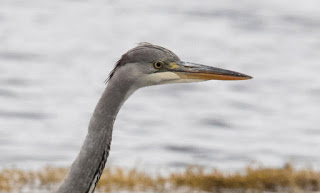 The previous four records of Gray Heron in Newfoundland are listed below.  More details on the Grand Banks bird can be found just two posts before this one.