The Cape Race CBC went ahead on 22 Dec 2012. There were 12 observers in five groups. The weather was unusually nice with light winds and no percipitation.  A good seabird flight developed off Cape Race by about 9 am when suddenly flocks of kittiwakes began flying north.  The kittiwakes and GBBGs were probably on a rebound northward flight after five consecutive days of strong north winds prior to count day pushed them farther south then they wanted to be.  Among the birds moving north were a late Northern Gannet and the first GREATER SHEARWATER on a Newfoundland CBC.  Greater Shearwaters are known to be present on the southern Grand Banks in December and probably some all winter, but I think this is the first shearwater seen from land during December in the province.  There were well above average numbers of Greater and Sooty Shearwaters present off Cape Race in mid November.  The species total of 69 was a new high total for Cape Race CBC.  Record or near record high numbers of species are bold faced. 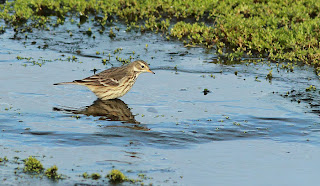 American Pipits are routine in early winter around Cape Race. Typically it is the flies living in the rotting kelp deposits on the beaches that attracts them, but this one was feeding in a fresh water brook.
Posted by Bruce Mactavish at 12:33