There are certain birds you keep in the back of your mind as possible finds during the Autumn vagrant hunting season. When I walk the little wetland at Long Beach Least Bittern is one of the birds I fantasize will flush up. When I am at the back of Mundy Pond, I always scan the edge of the cattails for a Least Bittern  clinging onto the vegetation.  I remember the story of Don Barton flushing a Least Bittern at Burton's Pond several times in early December eons and eons ago. I was always envious of long time birding buddy John Wells who saw a Least Bittern at Quidi Vidi Lake when he was a teenager in early September 1971! I recalled a story about the legendary Les Tuck being offered a Least Bittern for sale by a fisherman on the St. John's waterfront.  Just a couple years ago a photo surfaced from a non-birder of a Least Bittern standing in the middle of a lawn somewhere on the Burin Peninsula.  I know there are other records of Least Bittern on file of non-birder encounters with stressed out vagrants. Least Bittern was high on my Mythical Bird Want List.  If I died never seeing one in Newfoundland it would have been understood.

On Monday morning Alison Mews texted me at work saying she and Ed Hayden were looking at a probable Green Heron at Virginia Lake. It was an excuse to bolt out of the office even though I'd seen my share of Newfoundland Green Herons but none for a good many years. I got there in 15 minutes. The heron was not in sight.

Where was it?  It was clinging on to the side of those cattails over there.  WHAT!!!! Are you sure it wasn't a Least Bittern?  Did you say you had a picture? As soon as the LCD screen lit up on the back of Alison's camera I saw the brown clump of a bird stuck on to the side of the cattails.  Alison you found a LEAST BITTERN !!!!!

Thus began the first of many waits of eternity for a glimpse of a bittern virtually made of dead cattail stalks. Over the following 72 hours pretty everyone in town who was a half birder or more came and saw. It was not a given.  At least one person made five visits before connecting.  The clumps of cattails were just far enough away on the other side of the lake that the bittern could go about its business without interference from people standing on the other shore with telescopes but it was a little too far for cameras and binoculars.

When in sight it sat grasping onto the cattail stalks in one position for an hour at a time moving only its body when stretching below to catch sticklebacks. It caught many.  When we couldn't see it we don't know what it was doing. Probably laughing at us. 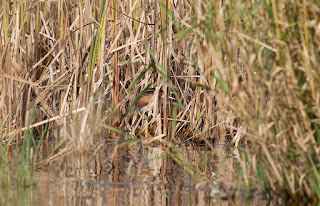 An uncropped photo taken with a 1200 mm lens showing the distance challenge which at least made sure the bittern could be its self not knowing it was being watched. 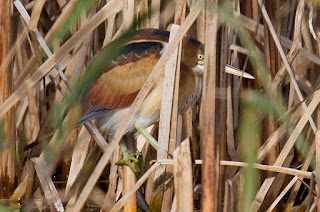 The same picture above after cropping. Going on limited information available I figured it was a male because it had black in the back.  But because the black was not fully covering the back it was not a full adult.  Because the wing coverts lacked internal markings of a juvenile I am guessing the bird was one year old this summer and now going into its second winter of life. 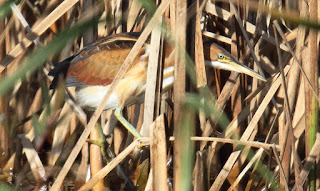 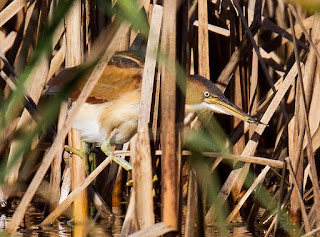 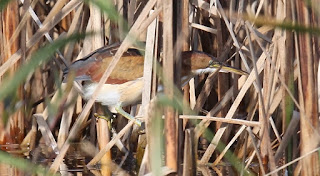 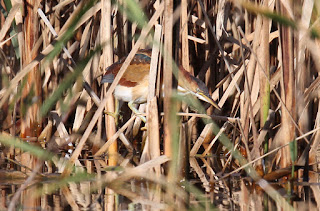 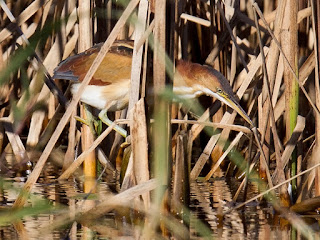 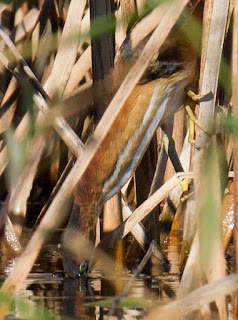 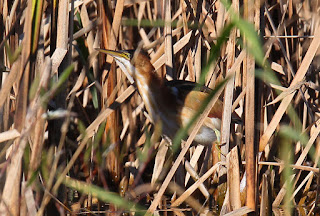 
Posted by Bruce Mactavish at 18:21 No comments: 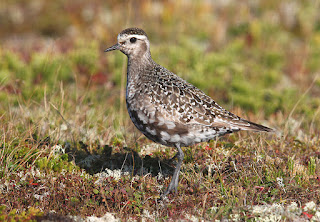 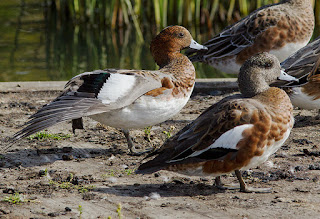 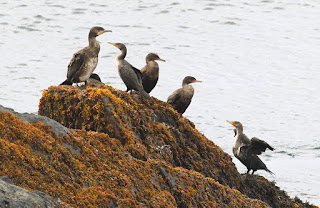 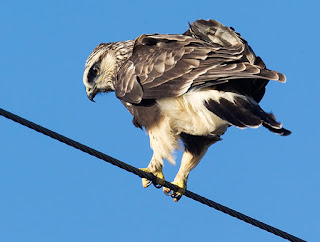 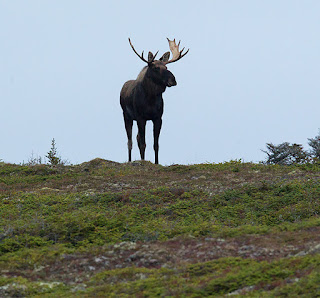 
Posted by Bruce Mactavish at 17:52 No comments:

Birding during the autumn on the Avalon is basically vagrant hunting 100% of the time. The frequent thrills make it a rewarding activity but other parts of birding suffer. For me photography of nice common birds goes down the drain during fall migration.  Last weekend was extraordinarily cold and it seemed liked the supply of southern vagrants hanging around had vanished and there was no hope of new ones arriving.  This allowed me to do things a little different in that I could enjoy the common birds more and some photography even.  The cold north winds meant that south facing St. Shotts beach would be free of the camera eating air-borne salt spray that is so prevalent here on most visits. I had seen plenty of shorebird here in Saturday. The camera finger was itching but there was no time for photography. Sunday (27 September) was different. I made the time. St Shotts beach for photography was my objective of the day.  As per usual a sure-thing planned photo session is always flawed in some way. This time it was the very dark overcast sky and the frequent passes of raptors kept the birds away much of the time. But overall it was a very rewarding 3.5 hours standing on the beach behind my camera, 840 mm lens and tripod.  The birds eventually ignored me and near full frame shots were the everywhere I pointed the camera.  We are talking only a few species here, mainly Dunlin, White-rumped Sandpipers and the ubiquitous Semipalmated Plover.  I have not figured out how to convey the beautiful full frame shots off the camera to a reduced image size suitable for posting on this Blog. So much of the finer beauty is lost in the downsizing. 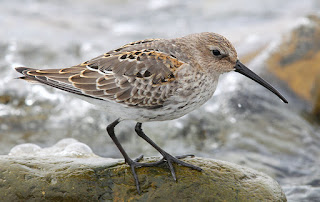 The juvenile Dunlin are in the process moulting into winter plumage. Right now they come in varied individual patterns mixing bright oranges and blacks with the incoming muddy gray feathers for winter. 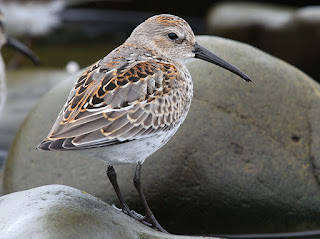 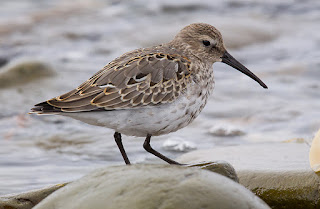 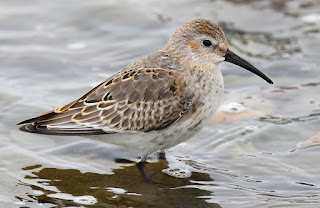 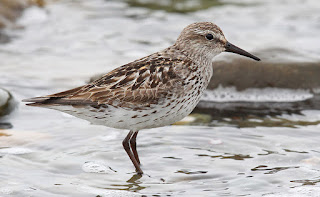 Newfoundland is at a lull in the migration of White-rumped Sandpipers. The peak of adults (above) has passed and the juveniles (below) are just starting to appear. There are always a few adults among the main wave of juvenile in October and November but this bird above showed far more breeding plumage on 27 Sept than most adults even in early August. 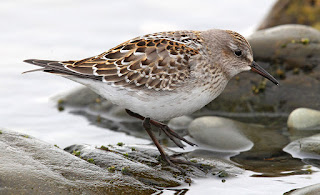 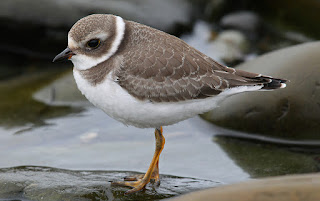 The Semipalmated Plover is a very common shorebird during fall migration in Newfoundland. It is everywhere. Absolutely no adults left by now just endless juveniles, all tame, docile and birder friendly.  I added a couple dozen more portraits to my photo collection of this species for potential use down the road when needed to support the ID a juv Common Ringed Plover . 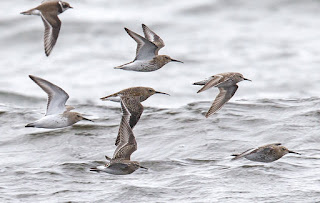 There are 4 Dunlin, 2 White-rumped Sandpipers and 1 Semipalmated Plover in this shot. You can see them all?

Posted by Bruce Mactavish at 10:29 No comments: