Feeder stake outs can be long and boring but sometimes you get lucky. Such was the case when I drove just south of St. John's to Middle Pond to look for a Rose-breasted Grosbeak.  Rose-breasted Grosbeaks breed in tiny numbers in the SW corner of Newfoundland. They are regular in tiny numbers as a fall vagrant to the east coast of Newfoundland. During the fall of 2012 above average numbers of RBGR showed up on the Avalon with half of them being reported at feeders, including some in November. While they frequently appear at feeders in November they very rarely linger into December.
I arrived at the house of the feeder, parked my car with a view of the feeder, opened the window and there it was sitting quietly in a bush behind a shed. It was just after sun rise and there was fog in the air. It was basically still dark. 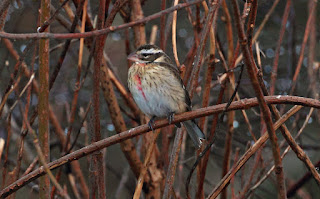 The Rose-breasted Grosbeak at day break.  The pink splash on breast makes in an immature male. 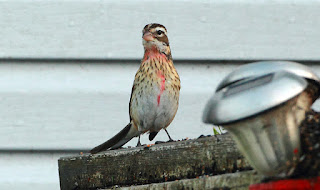 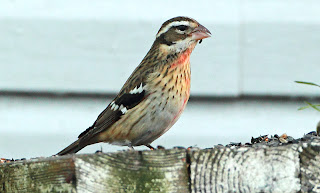 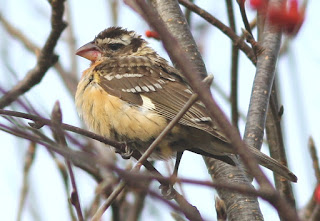 This is one the province's two records of Black-headed Grosbeak.  It was photographed in St. John's on 4 Nov 2008.  Note the very fine/faint streaking on flanks which easily confirmed this birds' indentity.
Posted by Bruce Mactavish at 04:58