Pink-footed Goose lost its mega rarity status in North America around the turn of the century. A small and ever so slowly growing number are now expected during the winter in the New England States.  It is seen regularly in autumn migration in Quebec and somewhat so in Nova Scotia and New Brunswick.  This is a long way from the first North American Pink-footed Goose for North America in May 1980 at St. Anthony.  I saw that bird. Paul Linegar saw that bird.  Norm Chesterfield, the first person to see 500 species in Canada came to see that bird. When news of two Pink-footed Geese spotted by Carol McDougall at  Branscombe Pond in St John's came over the rare bird line at 11 am today I thought to myself - "Great, it will be nice to see two together and with other geese".  There was no exploding out the office door and speeding through traffic to see the bird soon as possible.  I could wait until lunch hour to drive the ten minutes from work with other rules-of-the-road law abiding citizens. Most birders in St. John's were over saturated with images of Pink-footed Goose after one spent December to April with the tame ducks at Bowring Park a few years back.

The light was fantastic on the flock of 18 Canada and 2 Pink-footed Geese.  Low mid-day October sun light is a beautiful thing. The birds were just a little bit far for cameras.  Even the 840 mm was not really enough but a little cropping made the photos more revealing.   Here are some of the pics. 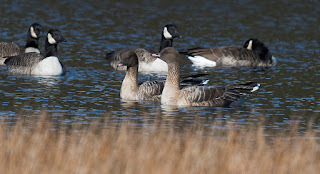 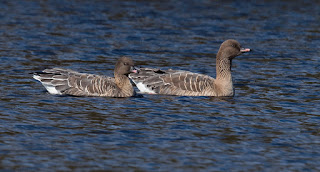 It remains to be known whether we will see these two Pink-footed Geese again. This has been a game changing fall for Canada Geese in St. John's.  Up until this year only the occasional one or two or three Canada Geese would enter St. John's and maybe feed on the grass in a fenced off ball field or Bally Haley golf course. This fall there has been a couple of flocks of 20-30 geese. One flock frequenting Virginia Lake and feeding on the pond weed.  Another flock of about 20 geese has been sporadically seen at Mundy Pond and perhaps the same flock seen feeding in at field off Brookfield Road. It might be this flock that the the Pink-footed Geese joined.  There are now harvested cornfields in the Goulds that would be excellent forage for geese. And last time I checked Bally Haley there were five Canada Geese there.

We need these Canada Geese as decoys to lure in wandering rare Greenland geese such as these two Pink-footed Geese. It should be noted that the Virginia Lake goose flock includes an interesting hybrid goose that I like to support the thinking is a Canada Goose x  Greater White-fronted Goose.  Below are some pictures of this interesting goose. 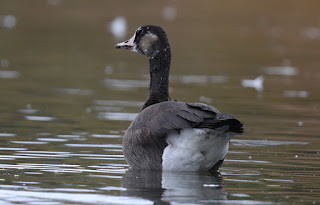 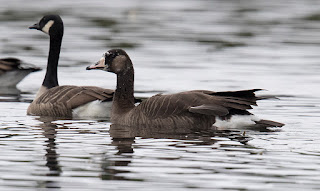 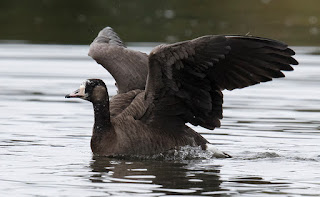 Baird's Sandpiper causes more anxiety among Newfoundland birders than any other shorebird species. It is a very scarce migrant during the period 20 August to late September and occasionally up to mid October. It becomes a case of looking too hard at similar species, mainly juvenile Semipalmated Sandpipers with somewhat similar scaly looking upper parts. However, the real season of Baird's look alikes is in the latter half of October.  Juvenile White-rumped Sandpipers are far more scaly on the upper parts than the Semi Sandpiper ever is. The juveniles start appearing in mid September but numbers really take off in mid Oct to mid Nov. Entire flocks of super scaly topped sandpipers are everywhere. They show up in odd locations for a sandpiper like parking lots, random lawns, roadways and of course kelp covered beaches. They become the dominant shorebirds species after the 3rd week of October.


If someone reports a Baird's Sandpiper in late October it is met with skepticism.  Today 21 October 2018 I came across a nice flock of 38 White-rumped Sandpipers feeding around a wet area where manure piles are stored on Pipeline Road, Goulds (site of the June 2018 Sandhill Crane).  The  drizzle and south winds gusting to 80 km/hr likely grounded them. There were only two adults in the flock. the rest were spiffy juveniles.  It seemed to be a pure species flock but then I saw one with a buffy upper breast walking  toward me. This doesn't look right.  Then it turned side on and I saw the buffy side of head and neck. That is all I needed to know this was a Baird's Sandpiper.  Very unexpected.  The late date was one thing but the fact that it was travelling with White rumps also seemed odd.

The immediate need was to get pictures. Although people generally trust my bird IDs there are some birds that no matter who you are one feels a lot better having seen the picture. It was not real close and the wind and blowing fog made for poor conditions but no excuse will do.  I had only 20 minutes with the bird before the whole flock of birds vanished after a Mourning Dove flew in!  Pointed wings like a Merlin I guess. 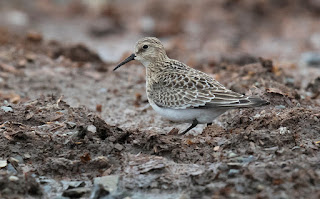 The buffy neck and side of head of this Baird's Sandpiper is the best field marks when separating it from a White-rumped Sandpiper which is always grayish here.

The Baird's Sandpiper has a nice buffy breast with vertical pencils streaks that is cut off in an even line.  The fresh plumage juvenile White-rumped Sandpiper on the right has an uneven lower border to breast streaking on a white-ish back ground. Juvenile White rumpeds show a variable amount of rufous edging to the scapulars. Baird's never show any rufous in the back but neither to do all White rumps. White rumps begin moulting out those red scapular feathers while in Newfoundland and replace them with plan gray feathers in preparation for the winter season. The presence of rufous eliminates Baird's but the lack of it is insignificant. 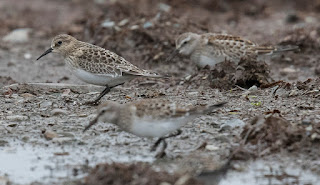 This picture shows the uniform scaly pattern of the Baird's next to two out of focus juvenile White rumps still with plenty of rufous showing in back. 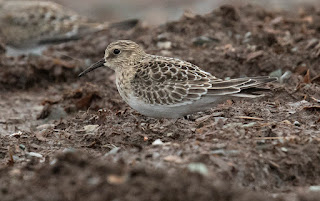 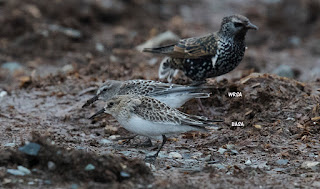 A comparison of the buffy neck colour of the Baird's vs the gray neck of the juvenile White-rumped.

This is the same juvenile White rumped above and below. Note how new plain gray feathers have grown in replacing the rufous edged feathers during its juvenile stage. 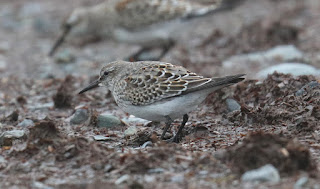 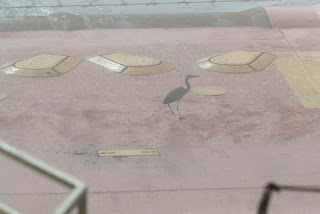 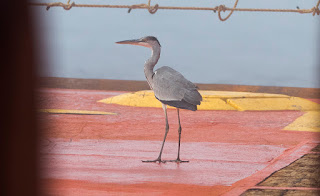 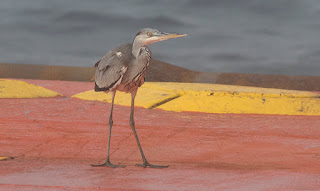 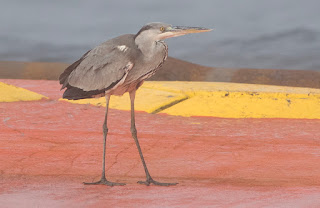 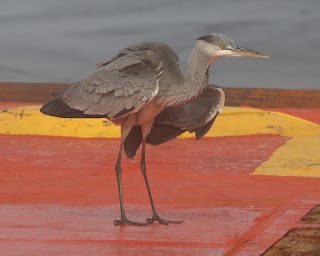 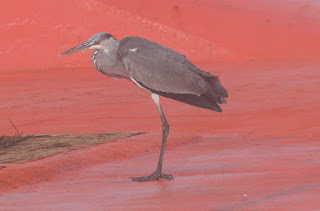 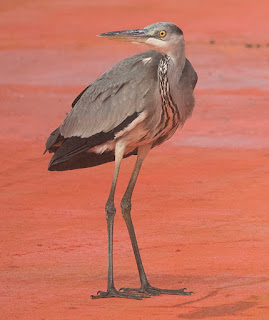 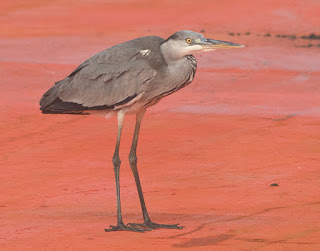 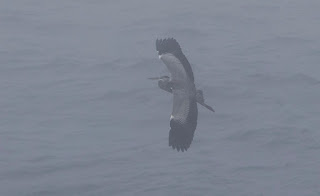 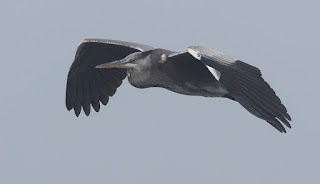 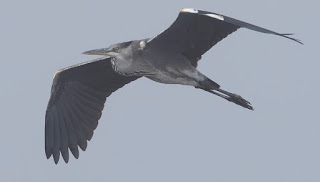 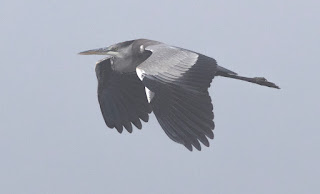 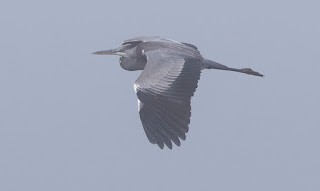 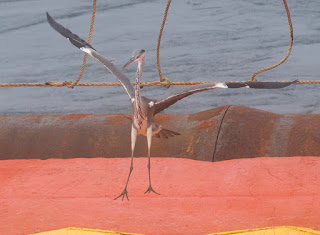 Posted by Bruce Mactavish at 12:23 No comments: