Last winter at Spaniard's Bay there were three strange ducks suspected of being hybrid wigeon x something.  Those same ducks are there again for this winter, and now are in more adult plumage.  There is one male and two females.  It appears they are American Wigeon X Mallard hybrids. 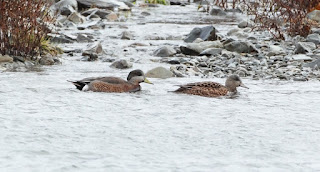 What are these ducks? Quick, your gut reaction before they fly away - what is this pair?

With time to look at these ducks today (31 Dec) I've come to the conclusion they are hybrid American Wigeon X Mallard.  Male on the left, female on the right - probably siblings. 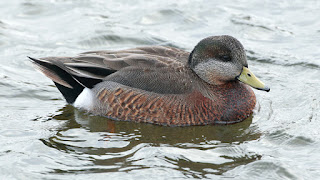 A close look at the male. 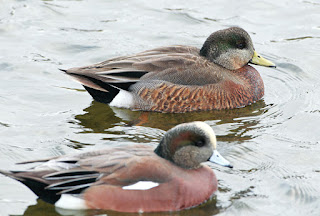 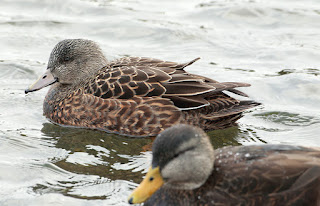 The female would have be more problematic to ID without the male  (not in this picture) it was keeping company with.  Note how the tail is dark and not whitish like a Mallard, however the male has a whitish tail adding support to Mallard over Black Duck as being the wigoen's illicit partner. 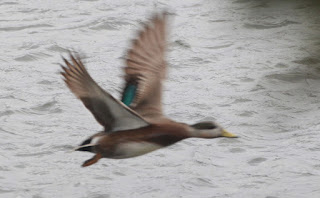 A blurry flight shot (one handed from a moving car!) has plenty of useful information, especially showing the blue speculum like a Mallard or Black Duck.
Other highlights expected on a winter trip to the western side of Conception Bay were the male Barrow's Goldeneye at Spaniard's Bay and the Buffleheads at Chapell's Cove.

The long time male Barrow's Goldeneye was present at Spaniard's Bay but far from shore. This is a 100% crop from a 500mm lens.  The male hybrid Barrow's x Common Goldeneye was also present for how many years is it now... 10 years???
The ponds at Chapel Cove in the bottom of Conception Bay have only recently been discovered as a as thee Avalon Peninsula Bufflehead hotspot.  This morning there were 11 present on the ponds but by early afternoon only two were persent.  There is plenty we don't know about the operations of these birds.  ﻿

Posted by Bruce Mactavish at 16:46