For the next three months (1 Dec -28 Feb) my sole goal in life is to see more species of birds in Newfoundland then my rival Stuart Tingley sees in New Brunswick. This ongoing competition inspires us to look harder for birds during the coldest season of the year. The first day of the winter list season is particularly important. Summer birds lingering far too late for their own good have limited life expectancy. It is important to cash in on as many of these as possible in the first few days of December.

Kelly's Brook in St. John's has turned into a magic oasis in December. The lush willows and warm water from an underground pipeline produce a micro-habitat that insect starved warblers stay with during the cold days of early winter. This year there was a nice collection of such suicidal summer birds = Nashville Warbler, Yellow Warbler, Black-and-white Warbler and Blue-gray Gnatcatcher. All the birds were puffed up fending off the cold but seemingly collecting lots to eat on the trees bordering the brook. If the birds can get through the next 24 hours they will have a week of above normal temperatures to make life easier.

While late warblers live at Kelly's Brook, Green-winged Teal have discovered something eatable in the rufous mud. This is certainly the best place in eastern North America to see Common Teal (Eurasian Green-winged Teal) at point blank range. Today there were two drakes in near perfect plumage and 2 or 3 others on the way to becoming good looking Common Teal. Over the last few years with warbler hunters walking through the willows the teal have become very tolerant of people.

John Wells was my lone bird dog for Dec 1st start up. We tallied 51 species with St. John's which is not bad. Most importantly were a host of lingering rare winter birds.  Other warblers we saw were Anne Hughes' Yellow-throated Warbler on the suet block and by pure chance locked onto a Yellow-breasted Chat in a shrub in front of a house in a residential area while driving at 50 km/hr.

December 1st birding in St. John's netted us 51 species including a nice list of rare winter list birds. Tomorrow it Cape Race to St. Shotts to clean up on the seaducks and hopefully find another warbler or two. White-rumped Sandpipers afraid to make the jump from Newfoundland to South America is another important species to nab tomorrow in the quest to Kill Tingley!!!! 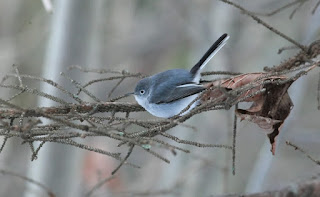 This Blue-gray Gnatcatcher was cold today after experiencing temperatures getting no higher than -3C for 48 hours but should do well when it warms up considerably Monday to Friday. 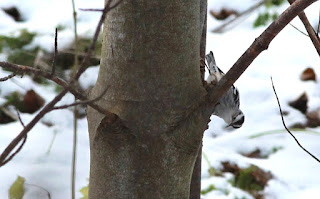 Every year during late autumn there are a few lingering Black-and-white-Warblers. ﻿
﻿ 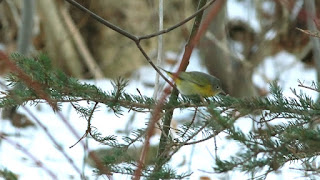 Nashville Warbler is a very localized breeding species in the province with a few showing up during fall on the Avalon.  The bird was much brighter yellow in life than this photo shows taken in the deep early morning shade. 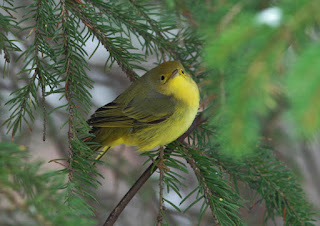 Yellow Warbler is surprisingly regular in late fall, especially at Kelly's Brook where one survived to mid January two winters ago. 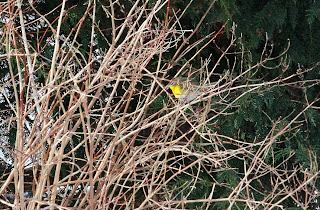 The Yellow-breastd Chat as first seen from the road driving at 50 kh/hr.  The bright yellow ball shone through the branches. 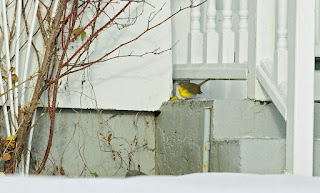 The chat did not appear to be going to a feeder but was moving around the houses in a rather exposed way for a chat.
﻿
Posted by Bruce Mactavish at 17:28