There isn't much light before work and none after. With the resurfacing of the Flatrock Brant and a Pine Warbler showing up nearby at Ken Knowles' feeder in Middle Cove it was a totally feasible thing to do on the way to work. The Brant was a piece of cake at dawn feeding on the marine algae. Ken's Pine Warbler however was busy elsewhere as were his Pine Grosbeaks that had been daily for the last number of weeks. One out of three is bad, but anything new on work day is pay dirt.

The Pine Warbler showed up several times later during the morning. Ken lured me back to his house with a promise of lunch while waiting/watching the warbler. I got the excellent lunch made by wife Kathy but didn't tick Pine Warbler, however Pine Grosbeak fell. And later added another species I forgot to tick during the madness of so many news one on the first day. So my total was 86 species by the end of the day.

Meanwhile Tingley and his mad dawgs birded all day in bird rich Albert County, NB. By darkness he had reached 85 species. The race is tight.

An even longer drive before work in the works for tomorrow. Another feeder stake out. Feeder stake outs are the worst form of birding but anything to Kill Tingley!!! 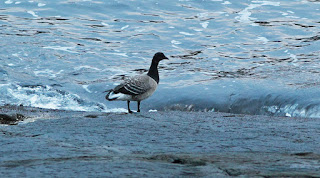 The Flatrock Brant at dawn in overcast light and a long distant crop. How long can it survive here?

Posted by Bruce Mactavish at 16:27