Kelly's Brook - The Brook that Keeps on Giving.

The Cape Race CBC was scheduled for this day but was postponed due to the weather forecast of rain and wet snow. Saturday turned out to be the nicest day of the month so far. No wind and temp around 0C. Oh well, a good opportunity for checking around town. Cape Spear was calm but a huge swell from some offshore storm was pounding on the rocks and created a heavy mist in the air spoiling the potential ideal viewing conditions. Did see an immature Atlantic Puffin on the water and small flocks of Dovekies were flying north far out. In Blackhead a flock of five adult Red Crossbills looking for seeds in last years white spruce cones was new for my 2012/2013 winter list and was #100. Back in town checked out Pier 17 sewer outflow hoping for the Bonaparte's Gull which actually has not been seen for three weeks. No sign but there was a new Common Gull making three present in town plus 100+ Black-headed Gulls. Drove over the hill to Quidi Vidi Lake where I knew a winter bird was waiting for me - a Ruddy Duck found yesterday by Lisa de Leon. A small group of people with cameras at one corner of the lake was the obvious place to look first. The fresh, healthy looking Ruddy Duck was unusually tame to the delight of the weekend snappers # 101. There were plenty of gulls on the lake in the fields and rooves around the lake. Scoped as many as I could looking for rare shades of gray coming up with only Lesser Black-backed Gulls (about 8, all adults).
The weather was too nice to not hunt for lingering warblers. I parked at Forest Ave area which has been covered only a few times this fall. Conditions were so perfect you could feel a rare warbler around the next corner. There were active feeding flocks of chickadees and juncos but not a warbler until Kelly's Brook. I wondered what warblers were still alive at this micro-oasis.
Saw the Nashville Warbler and Black-and-white Warbler right away. Still trying to get a good picture of the Nashville I stood for a while on the 'sand bar' waiting for it to come to me. I saw a movement in a willow branch dragging in the water collecting dead leaves. It was dingy gray, with a light wing bar, was that streaks on the breast? Whatever it was it was a new bird for Kelly's Brook. Half expecting a Yellow-rumped I was very pleasantly surprised when a CAPE MAY WARBLER popped up. A dull immature female. Only about the 3rd or 4th for December in St. John's, one being just last year at Gene Herzberg's feeder. Cape May is a very scarce, more like rare bird at any time on the Avalon Peninsula. An excellent winter bird #102.
Spent the next 90 minutes at the brook waiting for photo opportunities and making sure I knew all the birds that were present. Meanwhile Lisa de Leon and Clyde Thornhill appeared.  Little did I know the bird had already been posted on nf.birds after Mike Parmenter had seen it 3 hours before I did.  The Yellow Warbler was missing but the Blue-gray Gnatcatcher was present. The three warblers and gnatcatcher were doing well. The temperature must have been that 0.5C above freezing. There were little swarms of 'November gnats'.
Will any more lingering warblers find the amazing Kelly's Brook! 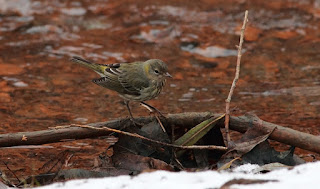 The immature female Cape May Warbler hunting for insect life over the water of Kelly's Brook is about the 4th December record for St. John's. 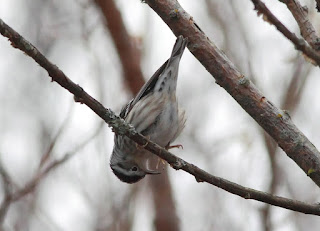 The Black-and-white Warbler dislodges a tiny insect morsel under a willow twig. 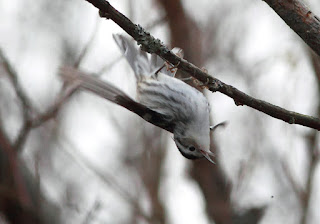 No matter how small, any tidbit of insect food is too valuble to let go in December.﻿ 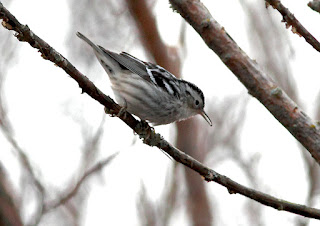 Posted by Bruce Mactavish at 05:00