This Ain't No QV Lake 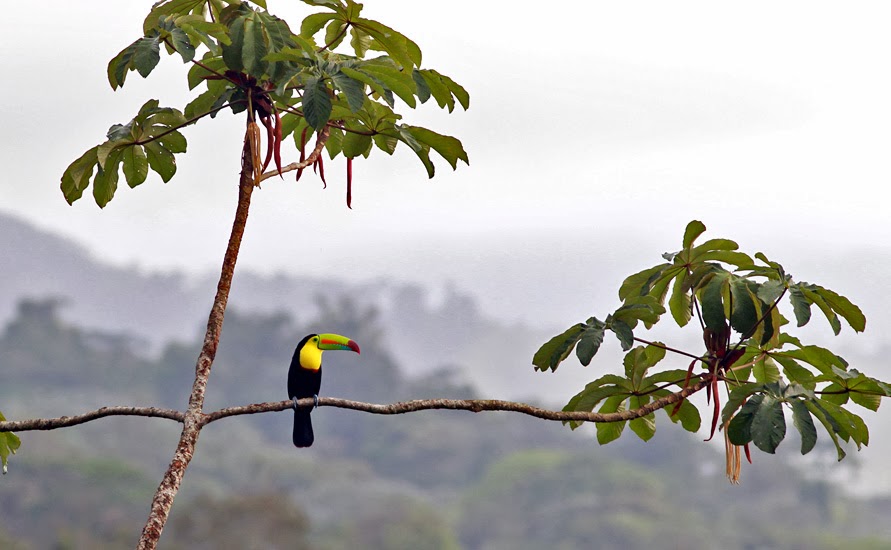 There something about this picture that doesn't fit Quidi Vidi lake.  For one thing the leaves are already out in full on the cecropia tree. 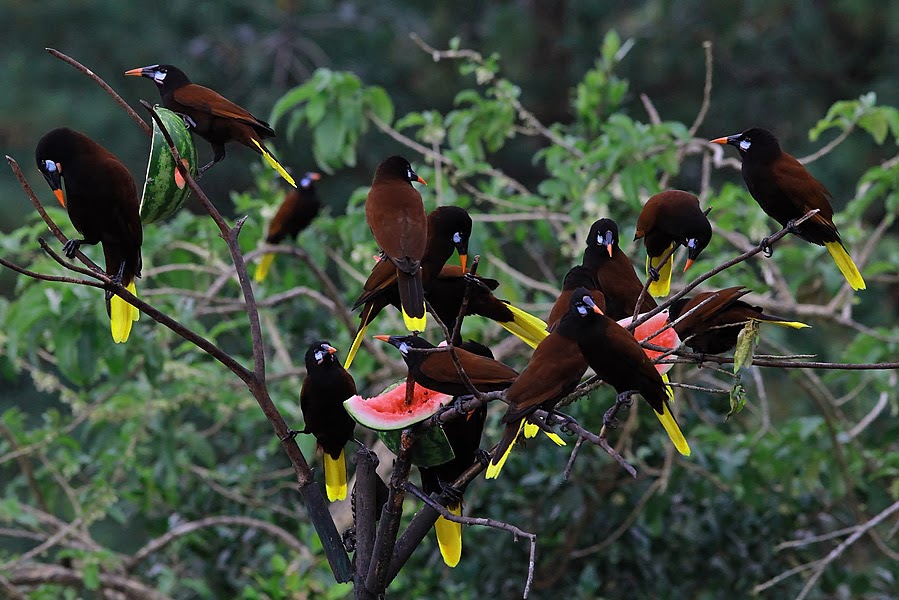 The people here put out watermelons at their bird feeders and attract all kind of things.  Anyone think of trying watermelons? 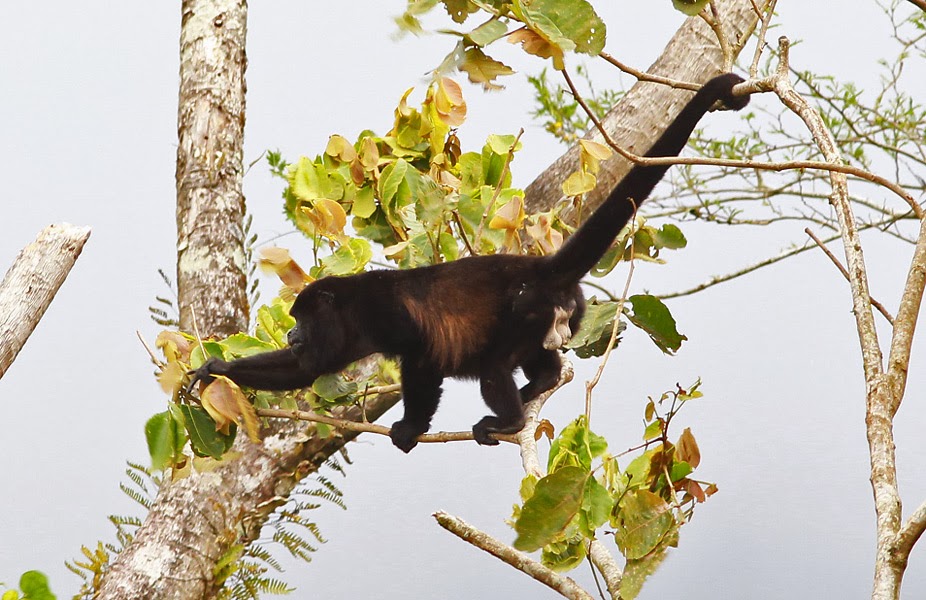 The squirrels look a little funny around here as well. You should hear them in the predawn!! 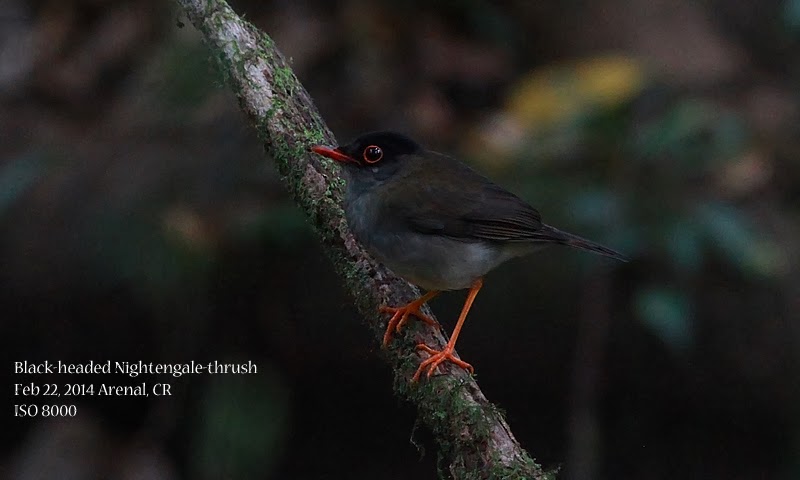 Okay it should be clear I am far far far away from Quidi Vidi Lake.  This is Costa Rica (latin for Birder's Heaven).  This is one of my lifers taken in the deep rain forest. 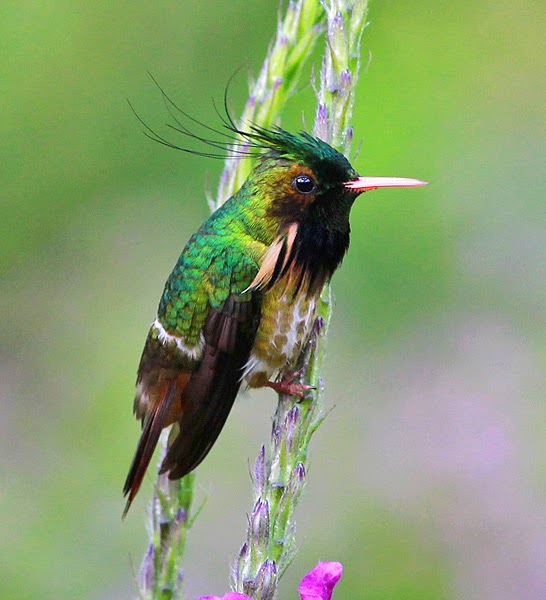 Snowy Newfoundland and Quidi Vidi Lake is but vague memory.  Anyone can come here. No need to be anyone special even though it feels like living the life of a King & Queen. Ok daylight is fast approaching. The howler monkeys surely have the whole place awake by now. 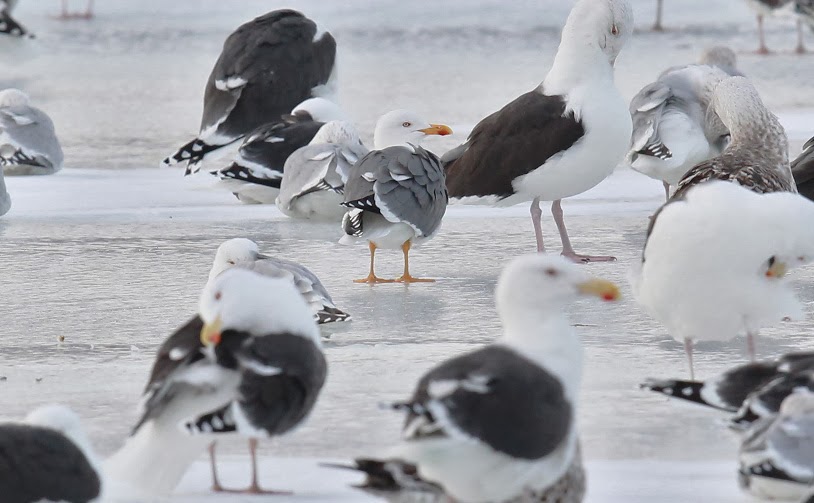 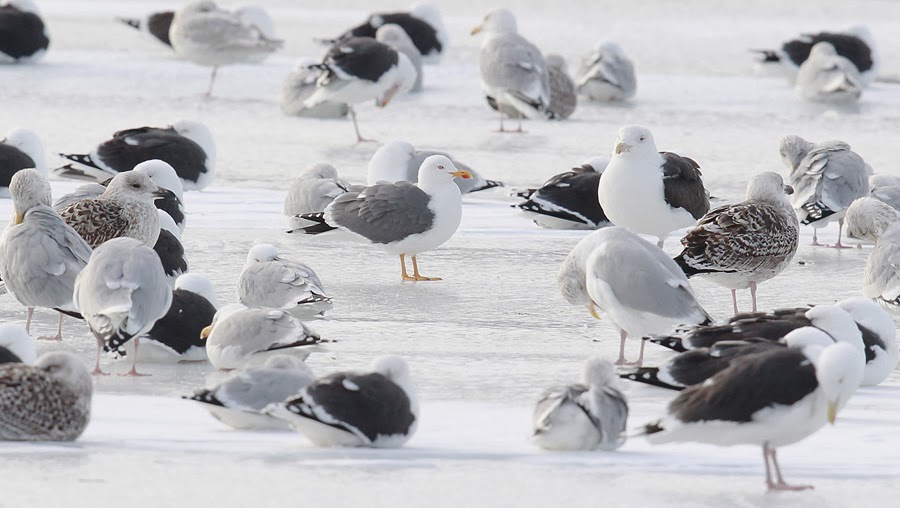 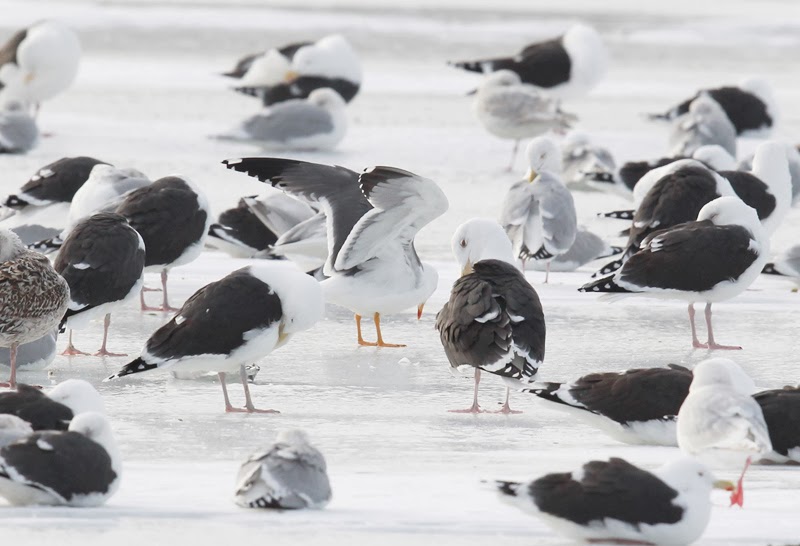 There is a good crop of dogberries on the Avalon Peninsula, Newfoundland this winter. The expectation of large flocks of robins and waxwings never materialized this time. Bohemian Waxwings were being seen in numbers in central and western Newfoundland but on the Avalon just scattered reports of Bohemians and a few small flocks of Cedar Waxwings. On Friday Catherine Barrett found a little flock (75) of both waxwings mixed in the Goulds near the corner of Petty Harbour Road and Donavans Road. Over the follow 48 hours a number of birders found the birds here for their first waxwings of the year. I was there Saturday morning. 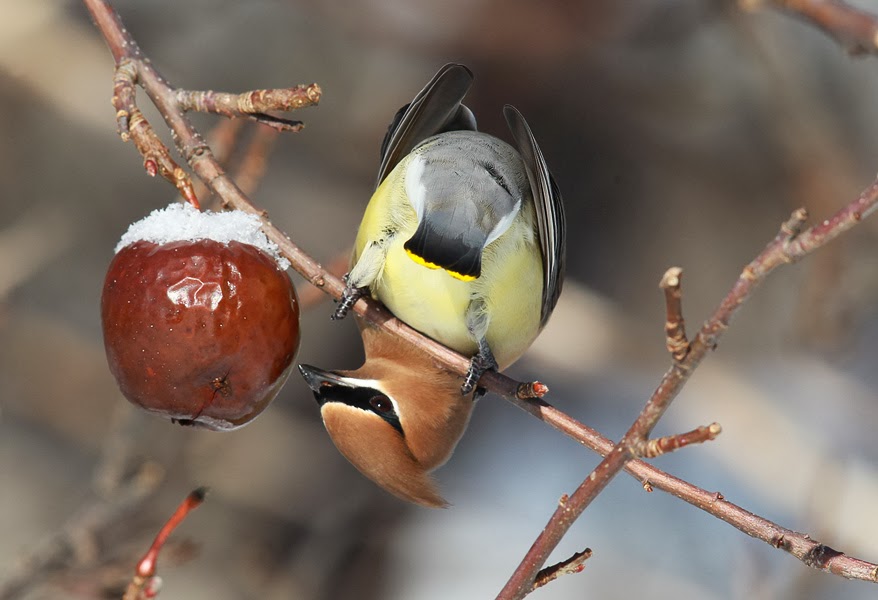 The Cedar Waxwings preferred to feed on old winter apples any way they could. 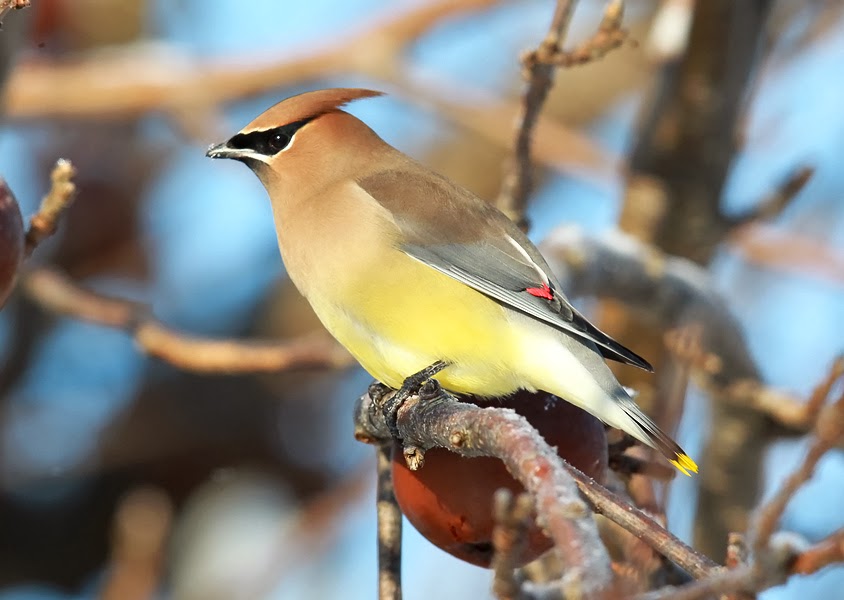 There was only one with the red 'wax' wing'tips. Apparently this means it was the only adult. 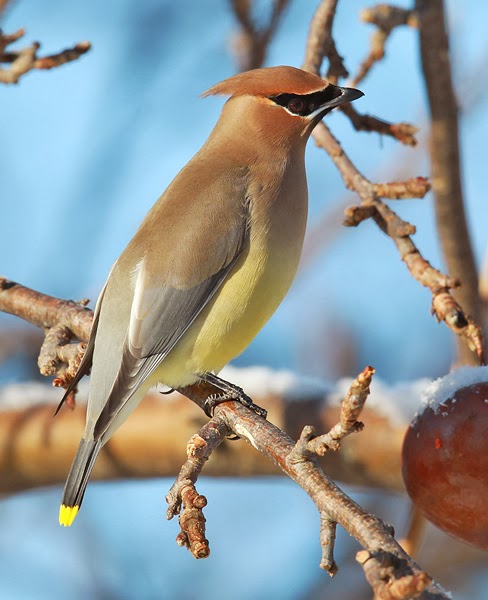 All the others lacked the red tips meaning there were first winter birds. 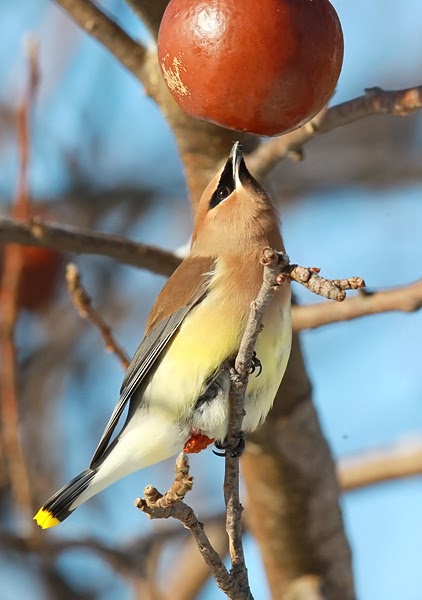 There was a knack to getting into the apples.  Going up through the core from below was a common method. 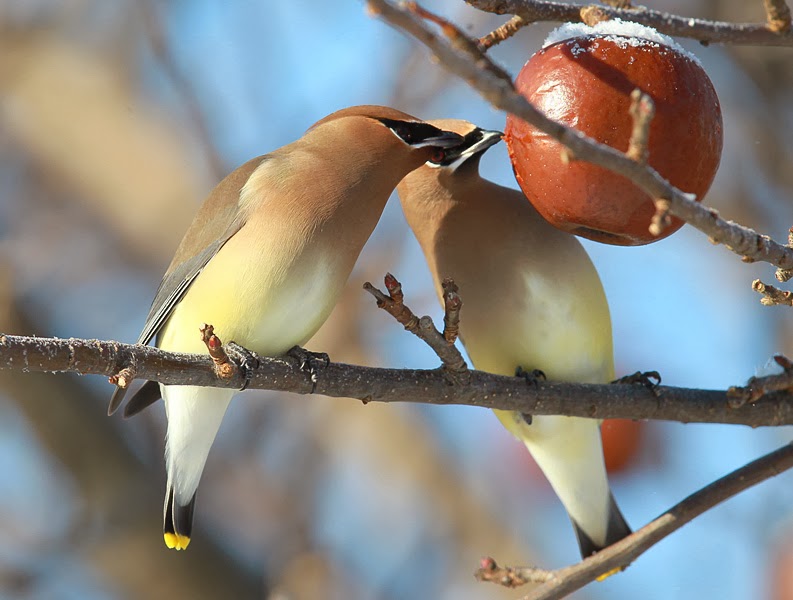 Sometimes they got in through the side of the apple.  The Cedars were fine with sharing food with others Cedar Waxwings. 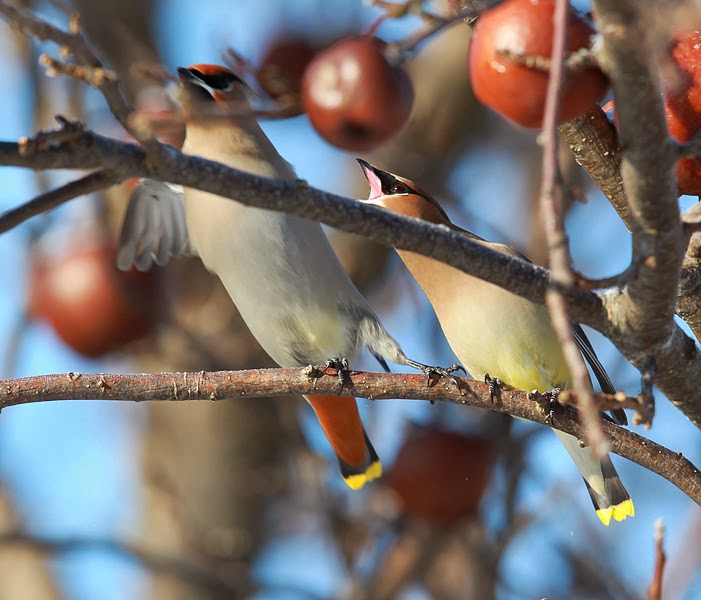 Behind the scenes a Cedar Waxwings makes it clear it has no interest in sharing an entrance to an apple with one of their bigger relatives. 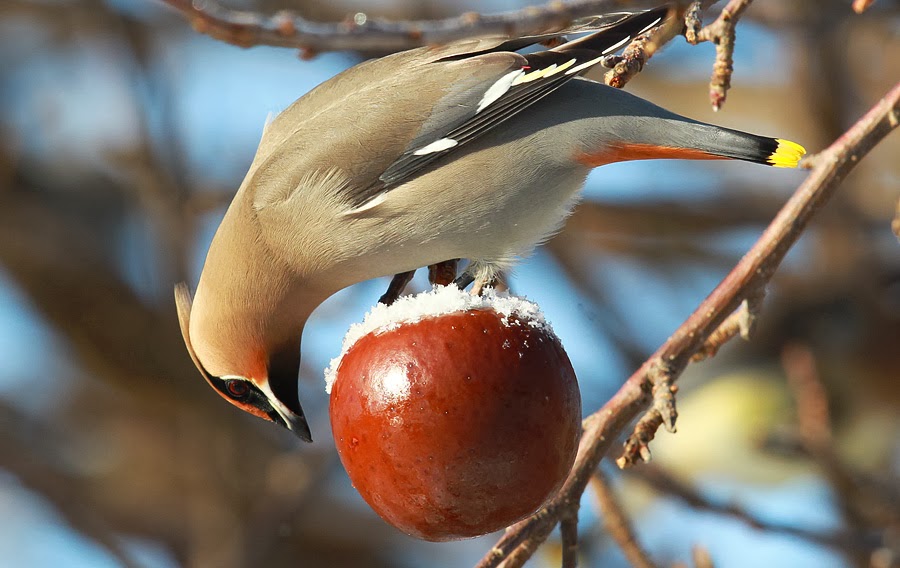 The Bohemian Waxwings fed mostly in the dogberry bushes but investigated the apples that interested the Cedars so much.  Maybe the Cedars had a taste for cider.

Posted by Bruce Mactavish at 18:21 No comments: 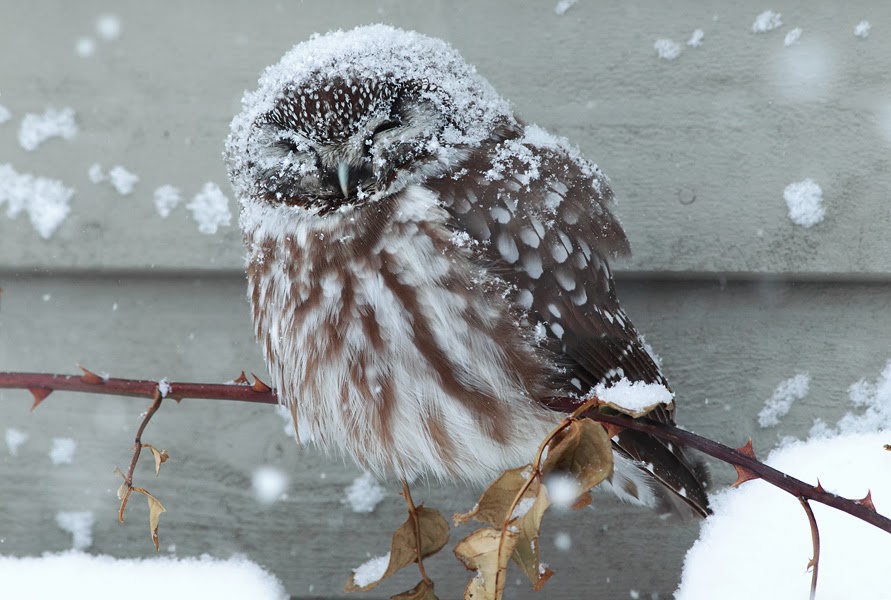 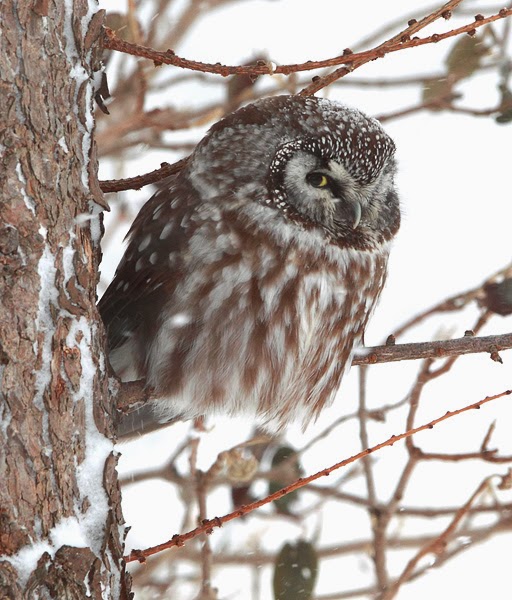 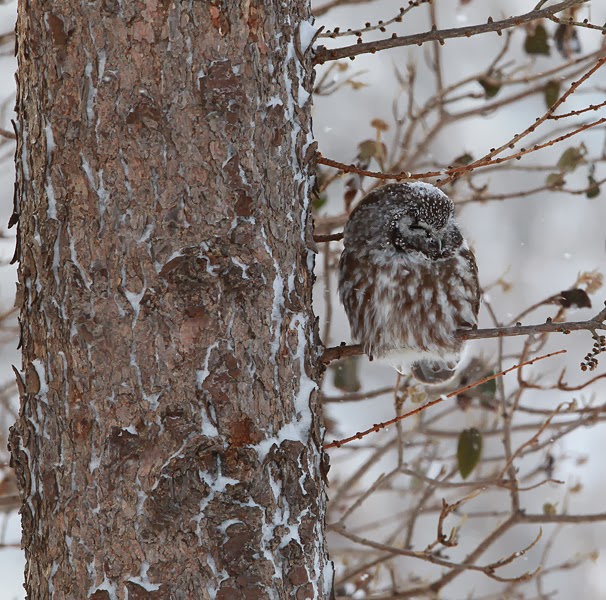 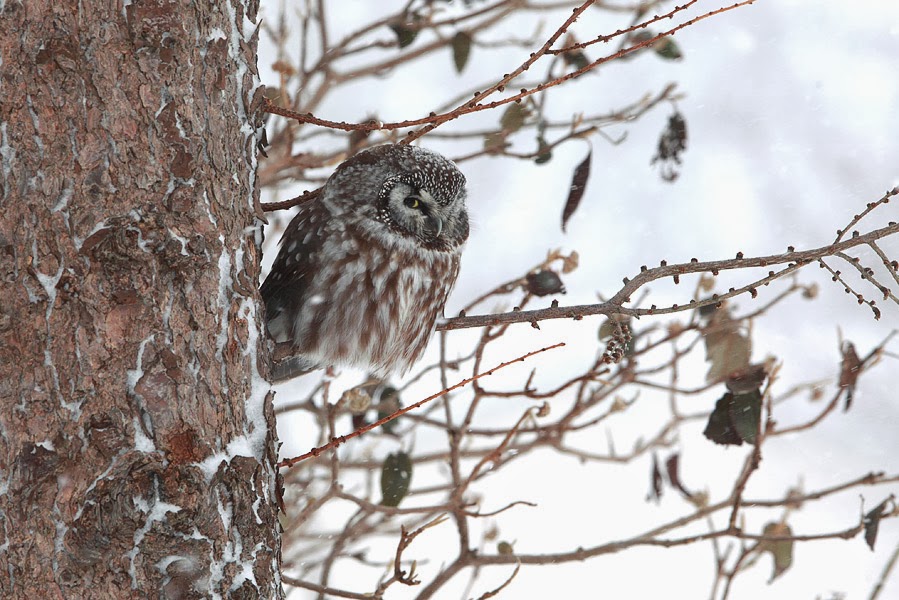 Posted by Bruce Mactavish at 18:36 No comments:

The Ice is Coming

This is the 5 February 2014 ice map for Newfoundland. The change since the 1 Feb is pretty significant. That is what happens during a period of cold weather accompanied by NW winds. The ice keeps on making and then moves on south smoothly with the Labrador Current.

What does this mean for St. John's based birders. In a word EIDERS.  The favourite wintering sites for tens of thousands of eiders on the east coast will be blocked with ice. The eiders will be forced to move south.  They might go to the south coast of Newfoundland but many stay on the Avalon. Places like Cape Spear can get be a eider bonanza.  There are several factors determining the level of eider watching at Cape Spear. Hunters in boats could prevent the eiders from feeling comfortable at Cape Spear. Did I say a couple of factors? Well hunters is the biggest factor even though they are quite rare at Cape Spear because it is too far for them to go in boat. The other big factor is the whim of the eiders. Luckily Cape Spear is hard to resist. Eiders love Cape Spear.  The visibility is good all-around and the feeding must be OK on the ocean floor. 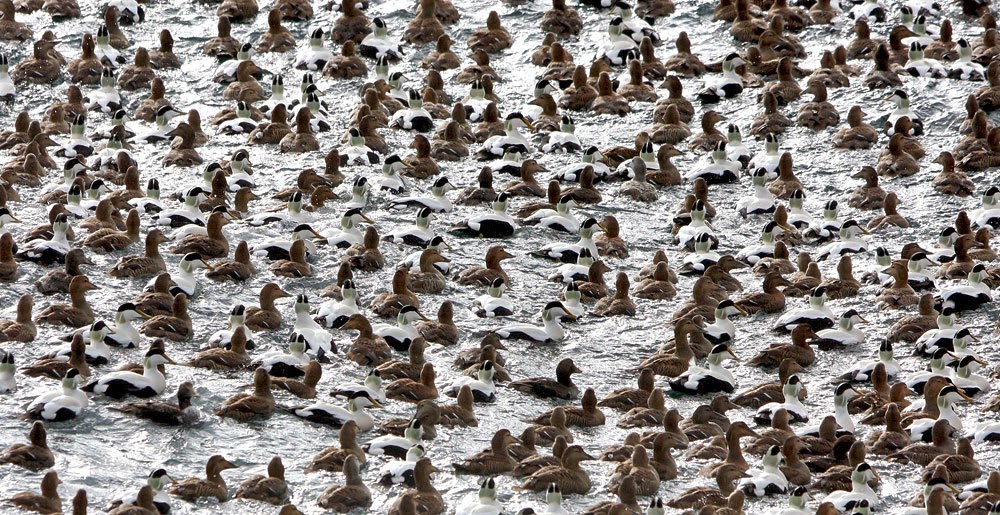 In ice years eider flocks at Cape Spear can be massive numbering 5000+ at times. But they are very wary having been hunted all the way along the coast. These ones are all nervous about something. 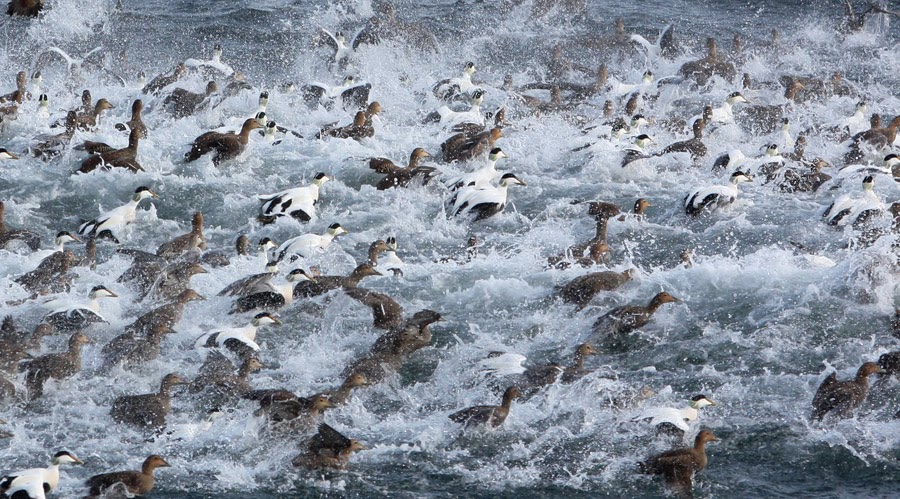 This time it was just another birder coming along not realizing the eiders would flush if they saw a human form on the shore.  It is getting harder and harder to get intimate with winter flocks of eider at Cape Spear with so much activity on the weekends. For starters it requires getting down near the water and hiding among the rocks and waiting and waiting for your chance that may never happen.  It is a rare day when the weather Gods allow that to happen.

A full adult drake King Eider is the prize for the Cape Spear weekender birding at Cape Spear.  This picture is the end result of several hours hiding in a crevice among the rocks on outer Cape Spear.  It was a rare day when the seas were relatively calm and the eiders came close and that this stonking drake King was there among the common eiders. 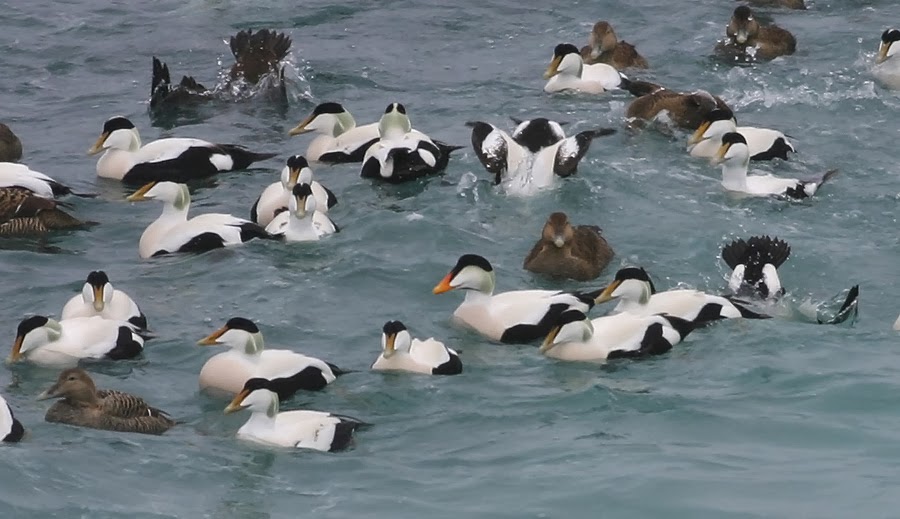 Exceedingly rare - but how rare?- is the Pacific Eider (S. m. v-nigra), currently regarded as a race of Common Eider.  See the monster eider with the carrot-coloured bill in this picture? This bird photographed off Cape Spear in March 2005 is as far as I know the only concrete proof that this 'subspecies' from Alaska, Russia and western Canadian Arctic has occurred in Newfoundland and perhaps the Atlantic Ocean. At the time in 2005 I checked around and could get no solid evidence that it has reached the Atlantic. The research was short of exhaustive.  It does appear there are small numbers semi-regular in western Greenland in winter.  More research is needed. This Cape Spear bird is a perfect in every feature for Pacific Eider. 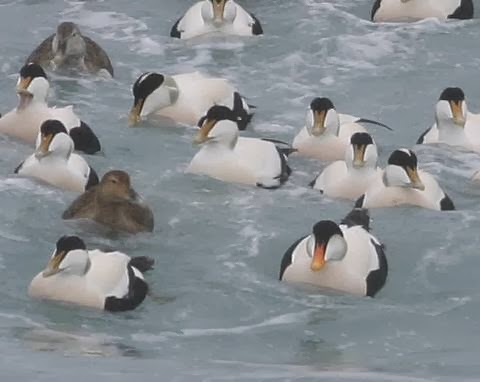 Another picture of that Pacific Common Eider from 2005 showing details of the feathering around the bill that is finger-print fail proof evidence of this rare eider. 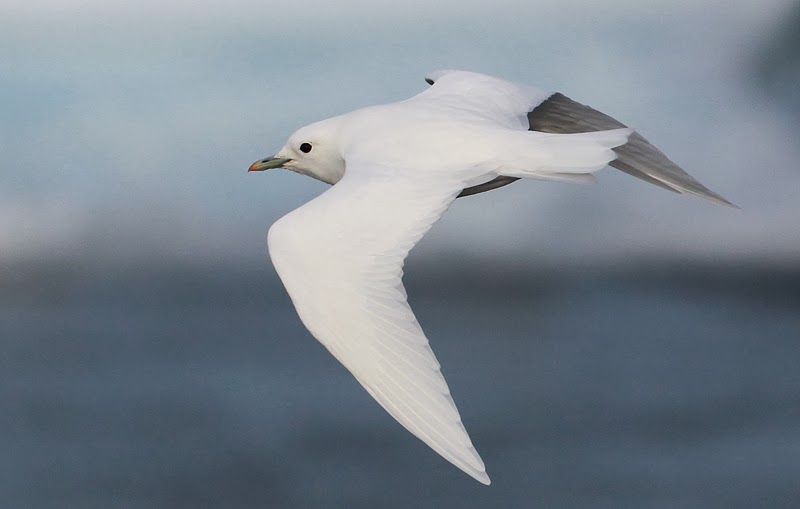 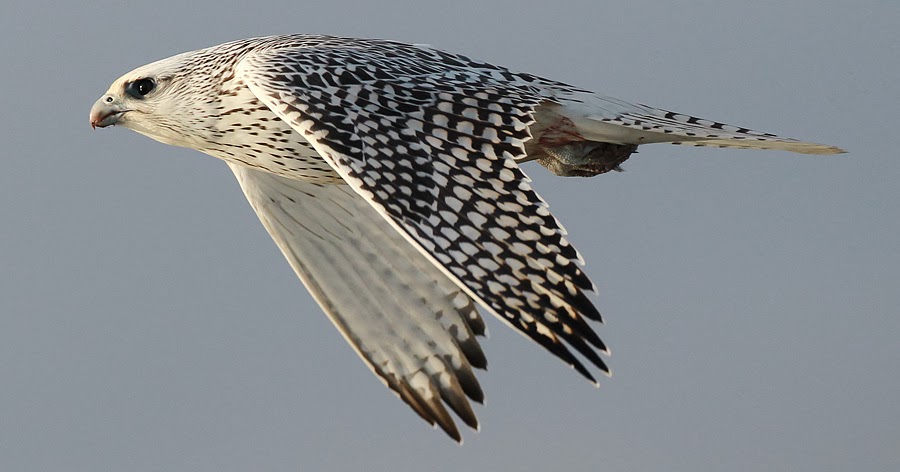 In a cold weather winter like this when the pack ice reaches the Avalon Peninsula the chances of encountering the ultimate ice birds are greatly increased.  Doesn't matter how many white Gyrs and Ivory Gulls you have seen the next one excites every cell in your blood stream and that is exactly what we need this weekend.  It could happen.
Posted by Bruce Mactavish at 16:25 2 comments: