A rushed post to get the first images of what seems to be a good LITTLE STINT at Renews, Avalon Peninsula. Images are small. Bird was far away and was using a 420mm lens. Tomorrow hoping for better.

Description: First impression was WOW look at that peep. It is so red and so white.  Little Stint came to mind first even though most of my Little Stint experience comes from photos.I had long ago concluded that I would not be trying to find one of these near impossible to ID birds among the common and highly variable juv Semipalmated Sandpiper in Newfoundland. It was a long afternoon chasing the bird around the harbour trying to get a decent look let alone a photo.  It was an hour after the initial sighting that I had seen enough that maybe I should tell someone but was torn between telling the world about a high potential false alarm.  First I phoned Alison Mews and Ed Haydon who I knew were close by. And then texted Alvan Buckley who I figured would take the gamble and go for it.

By late afternoon seven people had seen it. Some were returning from birding farther south when they saw us looking. Even a female RCMP officer stopped for a look with a sincere interest in what we were looking at. I got a One Free Speeding Certificate for everyone.

It was reddish. Hardly orange like some of the juv Semipalmated Sandpipers.  That is margins of scapulars, most wing coverts and tertials.  There were two sets of distinct white lines running down the scapulars. Also a particularly strong rufous cap. It had a good split supercilium which is said to be a good mark for Little Stint when present.  There were two strong short bars on side of the breast within a light wash of rufous - another good mark for Little Stint.  The wing coverts and scapulars were all solidly blackish.  Semipalmated Sandpipers have some grayish based scapulars.  The wing tips appeared to extend just slightly beyond the tail which is good for Little Stint.

There was only one juv Semi Sand present for comparison.  The Semi was a fair bit larger and fatter. The suspect Little Stint was more slender, less puffy. The under parts were very white contrasting with the head markings.. Semipalmated Sandpipers often have a slight tinge of buffiness to the under parts, especially those at the orangest end of the scale. Also the bill and legs seemed a little blacker, more jet black compared to a Semi. By the end of it I knew to look for slightly longer legs and that is the way it was when next to the Semipalmated Sandpiper.

Below are some of today's pictures showing some of the features mentioned above.  Small images. Hopefully better tomorrow.

ADDENDUM - These photos were sent to a half dozen notable shorebird experts on both sides of the Atlantic with an unanimous response that it is a totally classic juvenile Little Stint. 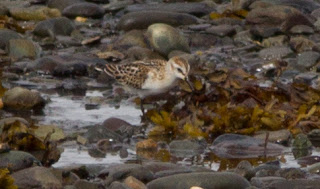 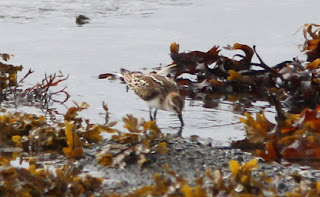 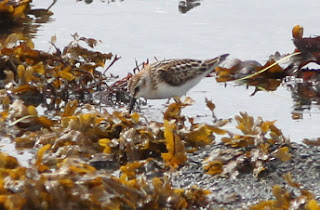 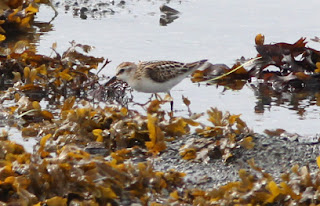 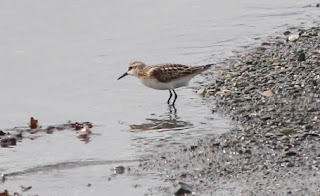 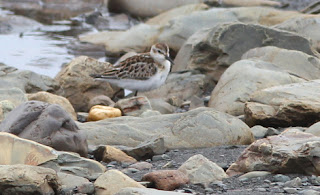 Posted by Bruce Mactavish at 17:10 No comments:

September 1st marks the beginning of the real fall birding. The vagrant hunting season is here. It is a period when any day has the potential to be a great day. All it takes is that phone call or a lucky find yourself.  The season is open for three months from September to November (92 days). Actually the season runs well into December. What will the collection of autumn rarities look like in 2015? How big will the rarity of the fall be?  It takes all of us to build up a rich haul of rarities. Start Now..... 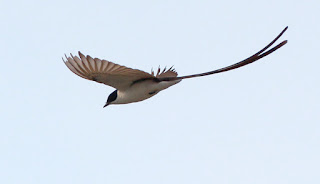 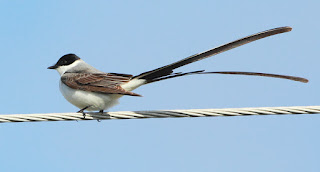 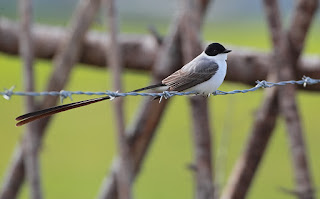 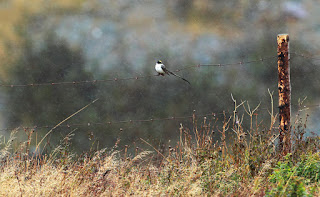