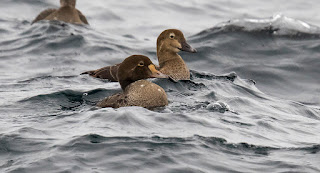 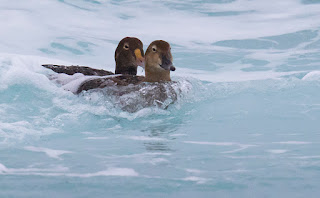 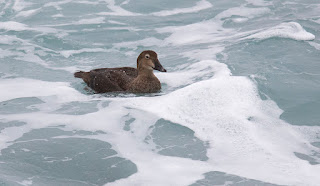 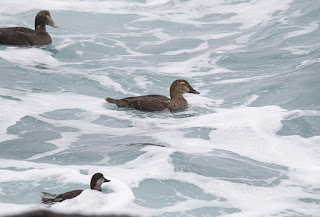 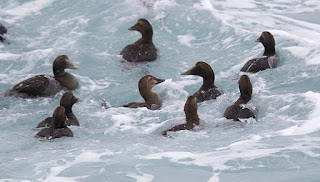 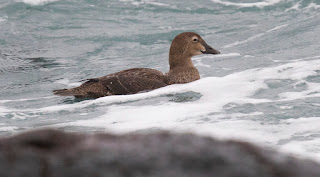 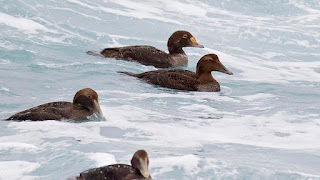 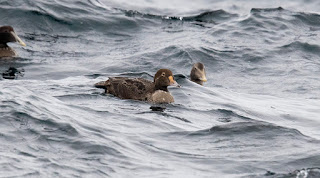 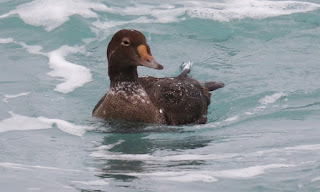 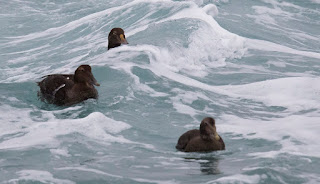 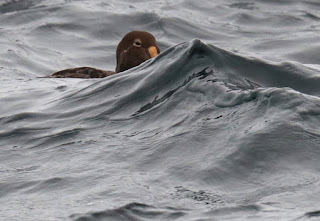 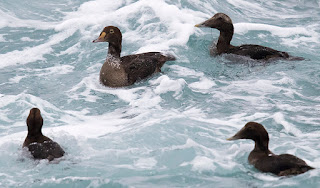 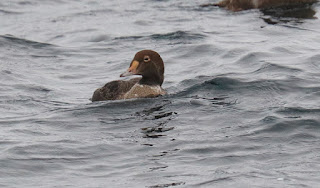 Part of the fun injected into winter birding is winter listing.  This is a list of species seen during the three month period Dec-Feb. The game adds new value to late birds or winter rarities. It gets one out a little more and birding places you might not be checking otherwise. The end result is more rare birds get found.  I have been playing the game.

The first ten days of the winter list season have been interesting. The mild weather means the late warblers are surviving.  I usually carry a camera at all times while birding just in case.  I take record shots of any rarity I come across.  Some the shots below are the definition of a record shot and far from a National Geographic cover shot.

The best bird of the season on the Avalon Peninsula was the EARED GREBE found by Chris Brown at Peters River on the southern Avalon. This was the first record for the province of Newfoundland and Labrador.  Today an AMERICAN GOLDEN PLOVER at Cape Spear was just as mind blowing.

Below is a photographic record of some of the birds that I have seen so far this month. 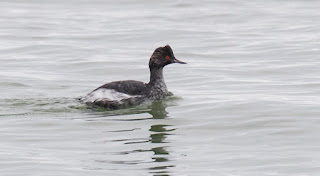 This EARED GREBE at present at Peters River on 1st, 2nd and 4th of December was a first record for the province. The partial breeding plumage was unusual for December and may indicate the bird has been under stress and/or not feeding well in recent months. 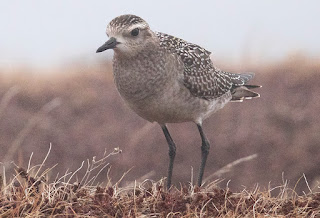 This juvenile AMERICAN GOLDEN PLOVER was a big surprise at Cape Spear today 10 December.  It is the latest provincial record by at least three weeks. It appeared during an intense weather system with far reaching southerly winds and an abnormal temperature of +18C. It appeared healthy.  The four, just about five, primaries extending beyond tertials is right for American GP. It should be only three for Pacific. Coincidentally exactly one year ago there was a juvenile PACIFIC GOLDEN PLOVER at Pt La Haye, Avalon Peninsula, NF. 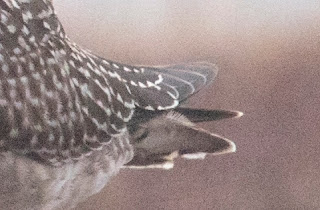 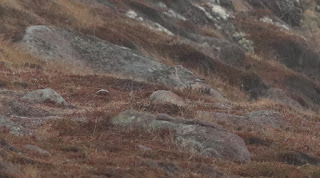 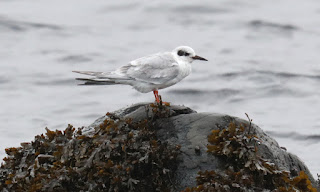 This Forster's Tern first found in late October at Trepassey remained into December. It is less than annual in the province. 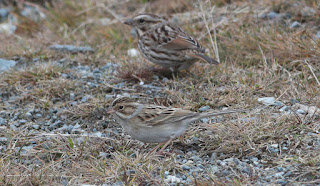 This Clay-coloured Sparrow at Ferryland was keeping company with a Song Sparrow when found on 1st Dec but a couple days later, out of the blue, three more Clay-coloured Sparrows appeared making a record size flock of 4 CCSP in Newfoundland and in December to boot. Krazy. 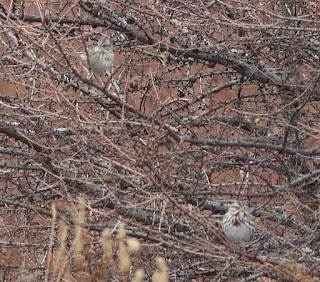 A Lincoln's Sparrows joins a Song Sparrow in scolding a pisher at Renews on 1 Dec. 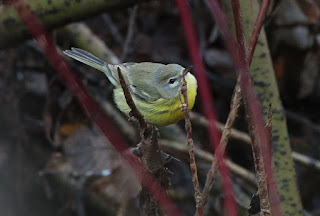 More often than not there is a lingering Prairie Warbler for the ticking in early December.  This one at the famous Kelly's Brook micro-habitat in east St. John's. 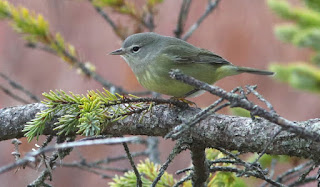 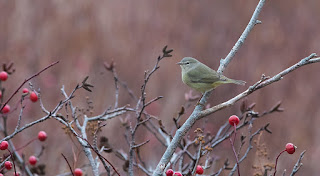 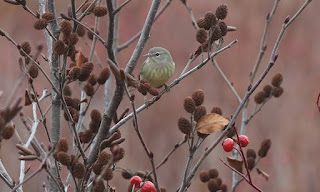 Orange-crowned Warblers have never been so numerous in December. I've seen eight this month myself, more than I see in most entire fall seasons Oct-Dec. 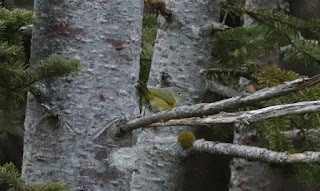 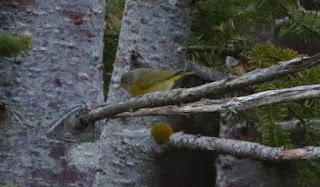 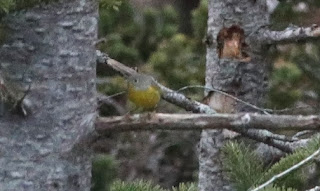 It is easy to go an entire year without seeing a Nashville Warbler in Newfoundland. December birds do happen..  This one at Cappahayden on 9 Dec was photographed early in the morning under heavy overcast skies at a distance using ISO 10,000. It worked, just barely. 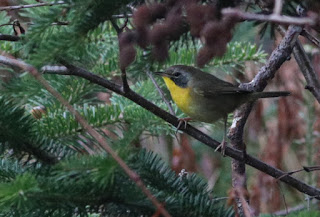 The Crossley ID Guide: Waterfowl was published in the summer 2017. It is self-published so may not be widely available at present. It is available on Amazon for $40.00.  As in the style of the previous four Crossley ID Guide books, it is a photographic identification guide. This book covers the regular and vagrant species of ducks, geese and swan occurring in Canada and the United States.  It goes into more depth per species than the other Crossley ID Guides.  The 512 high grade glossy pages create a flexibound book with a substantial weight.

Nearly full page or double page spreads attempt to show birds as they would appear in the field through the use of murals comprised of photographs of individual or groups of waterfowl inserted on to a real life background.  The scenes are alive with activity set in appropriate habitat and season for the corresponding species and plumages. The plates are easy on the eye with the learning process setting in almost subconsciously as one takes a walk through the scene. The details and colours of the birds at various distances are believable and accurate.

The common species are shown with an abundance of images. For example the two species of goldeneyes get a combined total of 12 pages of plates. They show perfectly plumaged spring drakes, first-year males and adult males in eclipse, females and even ducklings. There are some scenes showing both Common and Barrow’s Goldeneye for comparison.  Those long time aches and pains most of us Easterners have had about the head shape and bill colour of any plumage of Common and Barrow’s Goldeneye should receive relief and satisfaction with this book.

The 17 pages of scoter plates are an exposé of the obscure female and non-breeding male plumages possible throughout the year while at the same time doing justice to the striking breeding plumage drakes without over shining the spot light. There are numerous images of eclipse male and female Greater Scaup, Lesser Scaup, Ring-necked Duck, Tufted Duck, Redhead and Canvasback to help solve the identification, including sexing and aging, of those challenging brown aythyas. The eight pages of plates devoted to the four North American subspecies of Common Eider, a subject close to my heart, is the most extensive collection of photographs yet published on the subject in any one place.  Yet, I found myself yearning for more examples of close up adult drakes showing the full details of the bill and head.  Those who find joy in dissecting Canada Geese into subspecies will find something to sink their teeth into. The inclusion of ducklings at several stages of development available for most species is a nice plus for this book.

The plates while functional identification aids are often beautiful.  Many look good enough to be enlarged and framed. The Steller’s Eiders coming into land on brassy water with a background of fog shrouded mountains is a beauty. You can almost hear the nasal calls and feel the splashing water in the double page spread of displaying drake Common Goldeneyes.

There is a brief descriptive passage across the bottom of each page of plates.  However, if you can tear yourself away from the pictures you will notice that the back one third of the book is comprised of written species accounts.  The three to four page per species accounts containing a wealth of information are divided into sections with these interesting headings: Other Common or Regional Names, Measurements, First Impressions, ID: In Depth and Similar Species, Year in the Life, Geographic Variation, Sounds, Diet and Feeding Behavior, Nesting, Hunting and Population and Conservation.  Crossley’s easy going somewhat narrative-style rounds out the corners of hard fact and scientific knowledge.

The common species are allotted two range maps, one for the breeding range and another for the winter range.  With such space you might expect some fine-tuned accurate detailed mapping of waterfowl ranges in North America but – NOPE! In fact there are astonishing mistakes. You can sort of excuse the lack of mapping the tiny breeding range of Blue-winged Teal in southwest corner of Newfoundland as it is rather insignificant on such a large scale map.  We are used to that, but when Northern Shoveler is shown as breeding throughout Labrador and Northern Pintail is not shown as breeding at all in Labrador then you are left shaking your head. The wintering range of the eastern Harlequin Duck is shown as Maine to Maryland.  What about the hundreds wintering in New Brunswick, Nova Scotia and Newfoundland!? There are several incidents of incorrect mapping of the winter and breeding ranges of waterfowl in Newfoundland and Labrador that would be obvious only to the birders from this province.  You have to wonder where the creators of the maps got their information. The baseline map does not even show the existence of Cape Breton Island or the entire province of Prince Edward Island!  Oh well - you would not a buy a book like this for the range maps anyway.

Ignoring the range maps, I think this book is a masterpiece. The treasure chest of images makes this book invaluable. But who needs this book? Your average field guide to birds covers waterfowl adequately for your basic identification needs. Experts on bird identification will perhaps have the most to gain from this book.  Little things come to light like the dusky underwing coverts of a female Red-breasted Merganser versus the whiter coverts of a female Common Merganser and the solid dark under wings of a female Common Goldeneye which could all magically come into play on a snapshot flyby of ducks on some cold misty January morning. This book has all the particulars for those who want to know a little more.

The Crossley ID Guide: Waterfowl is a visual encyclopedia of North American waterfowl.  The voluminous text is thorough with easy to extract information.  It is a pillar of a reference book that deserves a place in every birdwatcher’s library. This will be my first go to book for waterfowl queries from now on.

The eider watching season is starting up in Newfoundland with a number of Kings already found among the first arriving borealis Common Eiders.
Posted by Bruce Mactavish at 18:11 5 comments: