In a spring with a dire dearth of European shorebird vagrants to Newfoundland there was a pleasant little showing of interesting shorebirds in late May.


Jon Joy found a group of three Black-tailed Godwits at Bonavista on 21 May. All were dull looking birds, perhaps first year birds, maybe adult females? They stayed a few days. Black-tailed Godwit is very rare but is the second most regular Icelandic shorebird after the Golden Plover to occur in the province.  Usually arriving as singles in late April to mid May with most being very brightly coloured birds assumed to be males. Three ties the record for the largest flock so far. 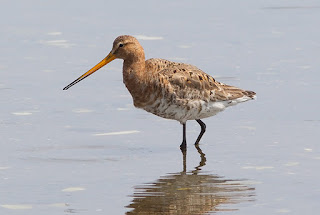 The other two Black-tailed Godwits at Bonavista on 21 May 2016.

On 22 May Ethel Dempsey birding with Alison Mews and Cape Race flushed a white-rumped Whimbrel from the grass by the lighthouse. The species (!!!it should be a full species!!!) is less than annual in the province and is rarer than Black-tailed Godwit. 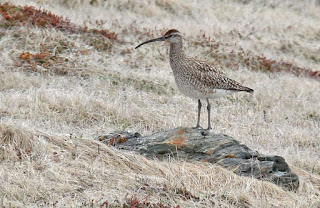 The  European Whimbrel was very alert and wary. Standing on the ground there is somewhat more white in the upper parts creating a light checkered appearance but it is probably not safely separable from the North American Whimbrel until it flies.  22 May 2016. 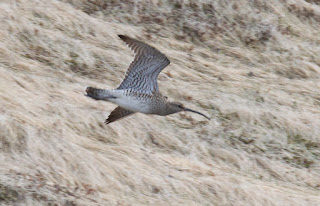 The bright white back ground to the underwing is striking compared to the dull brown of a North American Whimbrel. 22 May 2016. 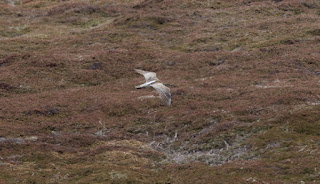 The tell all white wedge up the back is always exciting to see in the field. 22 May 2016.

Catherine Barrett got the surprise of her life driving home on 26 May seeing a boldly marked male Ruff in a small wet patch close beside the Back Line Road, Goulds. It stayed less than two hours. It was figidty and never fed. It seemed like it just dropped in out of the storm for a rest before continuing its journey. This was the second male Ruff of the month. The other being in Little Catalina in mid May.  The occurrences of Ruff are unpredictable in Newfoundland. It is just about annual in spring and fall with adult males being in the minority. 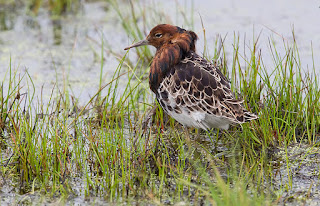 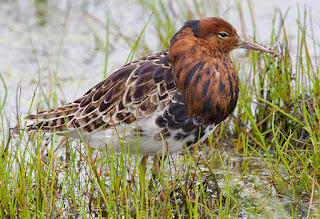 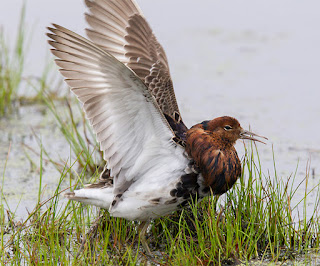 European Golden-plover can occur by the hundreds in spring in Newfoundland with the majority happening 20 April to 10 May. 2016 was not one of those springs with just a single bird in mid April near Lumsden. Therefore it was doubly surprising that a late individual was turned up by Alvan Buckley and Catherine Barrett on 28 May at Biscay Bay, Avalon Peninsula. 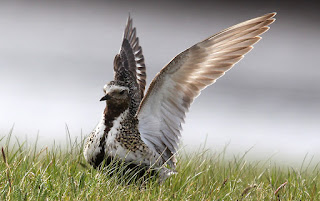 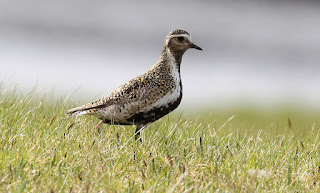 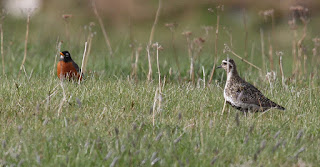 American Robin and European Golden-Plover 29 May 2016.

Posted by Bruce Mactavish at 17:27 No comments:

Alvan Buckley discovered a CAVE SWALLOW at Quidi Vidi lake, St. John's, Avalon Peninsula Newfoundland today. It was present for at least five hours feeding mainly in the middle of the lake far from shore. Views were distant and photography tough but for a five minute period in early afternoon when it fed with some Tree Swallows over the grass along the shoreline and over the Virginia River mouth parking lot practically flying in between a half dozen people watching. It was almost touchable. Very difficult for cameras to auto focus on the fast moving bird at close range.  Below are some pictures from that five minutes.

The bird had a dark chestnut rump which is a feature indicating, but not confirming, the West Indies race of Cave Swallow.  Further investigation may follow. This might be the more expected source of a spring vagrant.  Spring records of cave Swallow for eastern North America are few. Nova Scotia has some old records. New Jersey gets them occasionally in spring. Late fall Cave Swallows are much more routine in the northeast and are suspected of originating from Texas and Mexico. The only previous Newfoundland Cave Swallow was from Long Beach, near Cape Race 12-14 Nov 2008 (found by Cliff Doran). 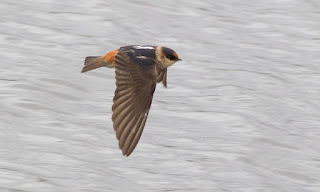 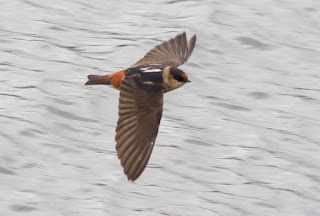 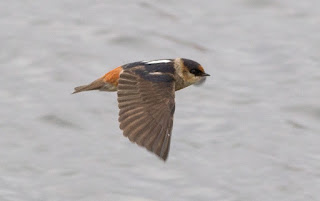 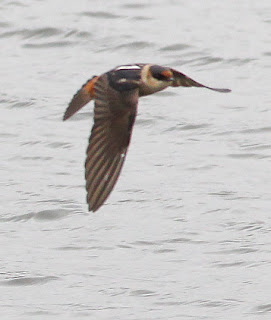 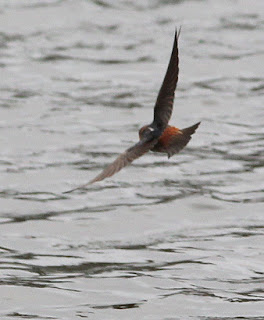 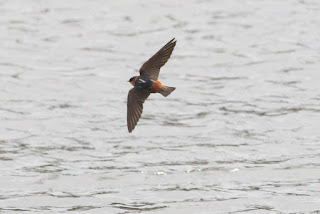 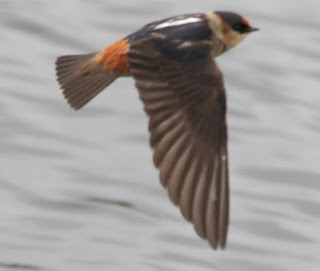 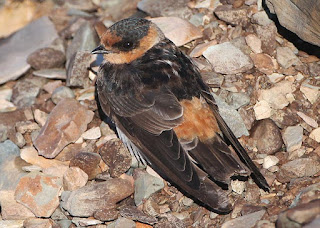 Posted by Bruce Mactavish at 15:19 No comments: 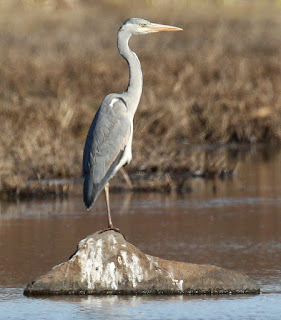 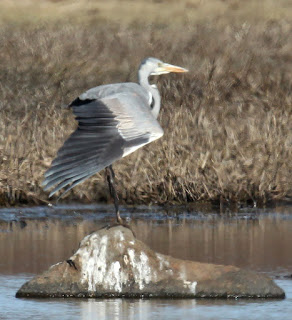 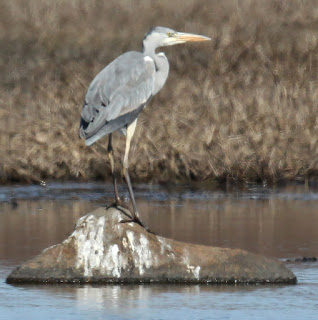 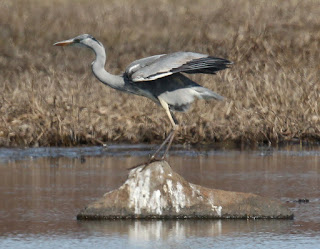 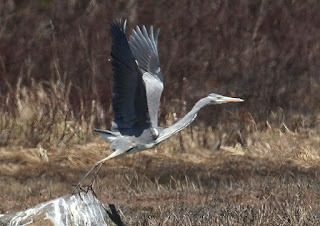 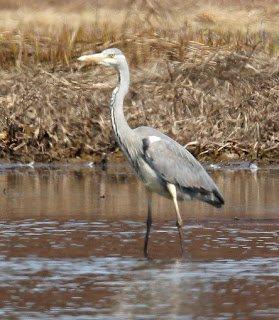 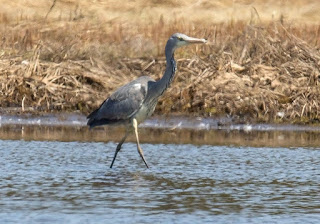 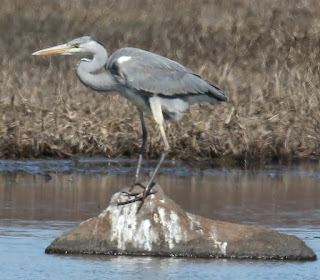 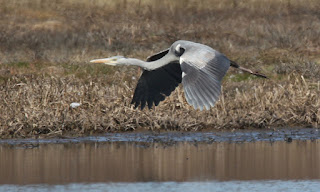 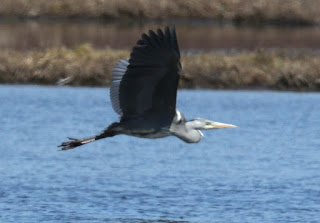 Posted by Bruce Mactavish at 18:24 No comments: