The winter of 2020/2021 was good with a liberal sprinkling of important rarities. It was a mild winter from December to mid February. Mid February through March was closer to average but still a little warmer than average. The following shows only the rarest bird that I saw over the winter. There were other major rarities around such as a Gray Heron on the Burin Peninsula which we looked for but did not see. 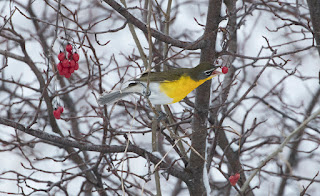 Yellow-breasted Chat is a regular fall vagrant with a few lingering late into the fall and early winter.  This bird at Virginia River, St John's (behind The Legion) was extraordinary because it lasted almost for the entire winter. It was well fed on berries and enriched suet but it was not seen beyond 10 March. Close but no cigar. There was a Sharp-shinned Hawk in the area. 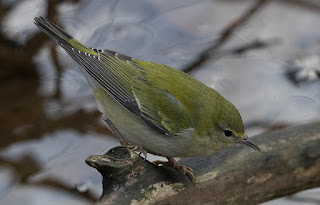 This Tennessee Warbler is a super hero.  It was discovered at Kelly Brook, St John's in November and officially survived the winter. It was seen today 23 March. Thanks to the super human caretaking efforts of Gerard Hickey it had plenty of quality food. Other warblers that he had coming to a mealworm feeder did not make it. A Yellow Warbler lasted well into January while two Black and white Warblers stuck it out to mid February.  The relatively mild weather aided in allowing this to happen. This picture was taken 1 Jan 2021. 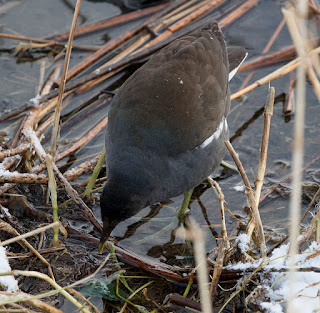 Common Gallinule is quite rare in Newfoundland and Labrador with one individual every 3 or 4 years. This one arrived in St. John's at Virginia Lake in June 2020. It moved to Mundy Pond in August where it remained into the winter.  It was last seen in mid February when all the water froze. This picture taken 1 Feb 2021. 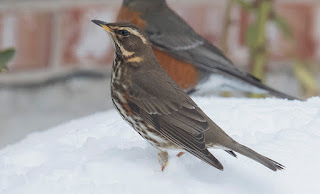 The Redwing is a transatlantic vagrant. There was an unprecedented number of sightings in Northeast North American this winter with I am guessing close to ten individuals. Newfoundland had three, maybe four.  This bird that John Brattey found on his street in St. John's on 23 Jan was a real crowd pleaser. It was seen regularly for a week then became irregular but started accepting berries at John's feeder. It was last seen in early March. This photo taken 30 January 2021. 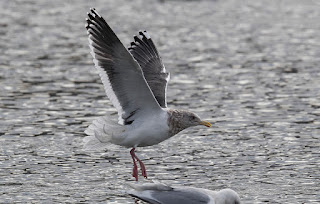 This Slaty-backed Gull found at Quidi Vidi Lake, St John's by Lancy Cheng on 12 February kept birders on their toes. It was seen several times until 24 February.  It was thought to be the same individual present last year in February based on identical wing tip pattern. Can we count on seeing it in Feb 2022?  These pictures taken on 16 February. 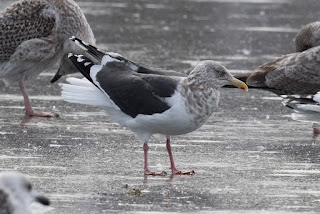 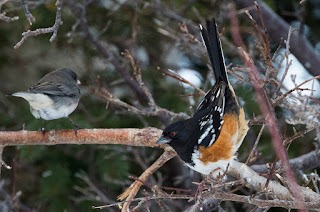 Bird of the Winter for some. This Spotted Towhee turned up at a bird feeder near Marystown, Burin Peninsula in late February. The two previous provincial records were from the 1990s and seen by very few people. This bird was more obliging for the provincial listers and new for all. Presumably it had been hanging out with juncos since the fall of 2020.  This photo taken on 4 March 2021. 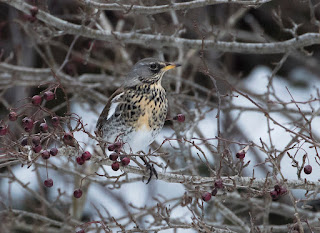 Still high on the Spotted Towhee (320 km from home) when Blair Fleming found this fabulous Fieldfare (3 minutes from home) at Bowring Park, St John's the next day on 5 March. There were enough berries to hold it for a day and a half.  It was rather shy and elusive but many birders got to see this gem that has become a huge rarity with one every 4-5 years after being more regular in the 1980s and 1990s. This picture taken on 5 March 2021.
Spring has just started in Newfoundland with the first Ring-billed Gulls arriving. A half dozen Northern Gannets were at Cape St. Mary's two days. ago.  As we go into April we start paying extra close attention to the weather maps hoping for a wind tunnel from Iceland to Newfoundland that could bring us some European Golden Plovers and allies.  We bird on....

Posted by Bruce Mactavish at 17:53 No comments: