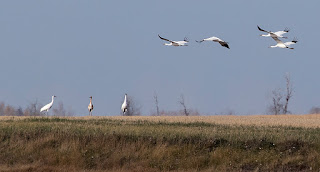 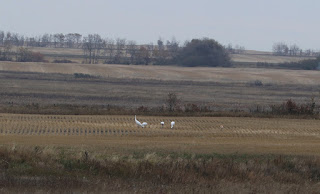 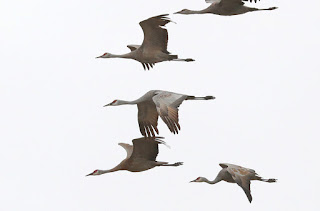 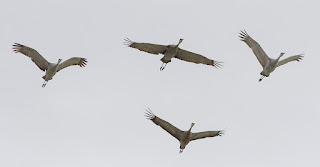 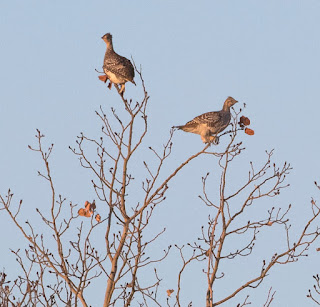 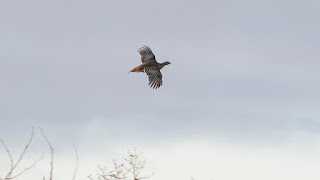 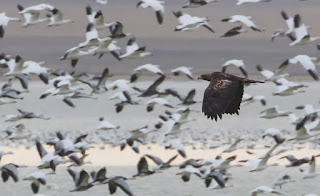 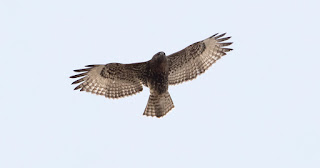 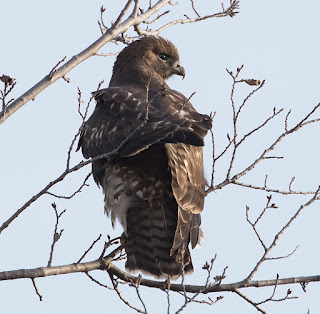 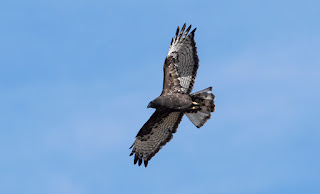 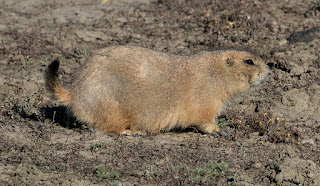 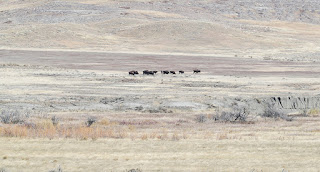 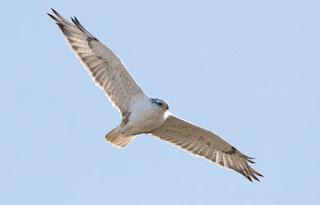 
Posted by Bruce Mactavish at 19:20 No comments:

The geese in Saskatchewan are amazing. The sheer volume is incomprehensible. Yah! so you come across 50,000 Snow Geese in a roadside lake. No big deal. No one rushes out to see such, for such events are commonplace scattered about the southern half of the province.  They feed in the cut wheat fields in the morning and evening and rest by day in the larger ponds/lakes.  Snow Geese were the most numerous species.  Among the Snows there were always some Ross's.  White-fronted Geese seemed more local.  However, we came across 25,000 resting by day at a lake that also hosted 100,000 Snow Geese.  A local farmer said he'd never seen so many geese as this fall. Canada Geese were abundant but often formed their own concentrations separate from the Snow Goose throngs. Among them it was fun to see the Cackling Geese. Sometimes there were sizable flocks of Cacklers with a few large Canada Geese sticking out like ugly ducklings among the flock. I am a non-believer in giving Cackling Goose full species status. The experience in Sask did nothing to change my mind. There are lots of in betweens. Even among the Cacklers there were differences, some with white breast some with dark breasts, a few with white rings around the neck. There is no doubt that Cacklers are a cute form of the Canada Goose but best left as a subspecies if I could change the rules back to the way they were. 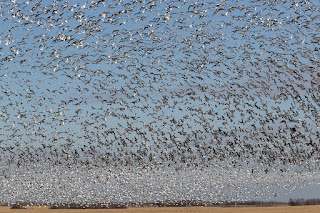 One Bald Eagle fly over caused a mass flush of 30-40,000 Snow Geese feeding in a recently cut wheat field. The sound of that many panicked geese nearly lifted us off the ground. 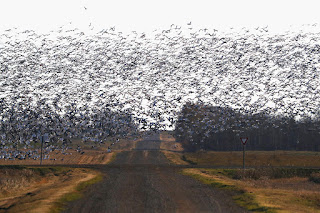 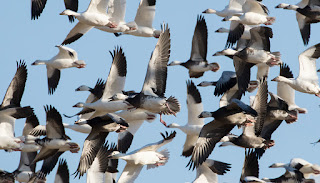 Within the flocks this is what it looks like. 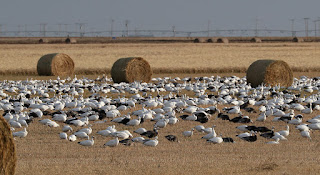 Breakfast in a wheat field.

Pretty easy to pick out the two Ross's Geese by the stubby bills. 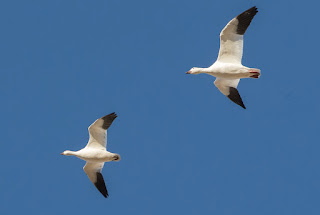 One Ross's, One Snow. 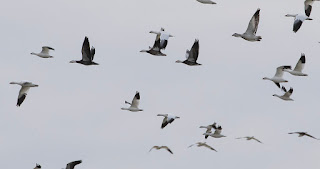 There are eight Ross's in this picture. 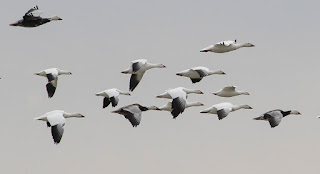 There are three easy Ross's  and one near Ross's in this flock.

Didn't do so well on photographs of the Greater White-fronted Geese even though they were less jumpy than the Snow Geese. They were my favourite goose to watch.

Speckle-bellies is a secondary name for the White-fronted Goose. 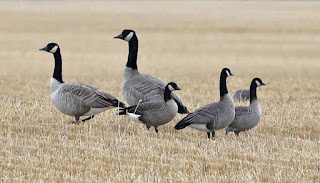 Who Made Who? Three Cacklers with two larger Canada Geese.

Mixture of Cacklers and other Canada Geese

A few large Canada Geese among this flock of Cacklers.

A parade of Cacklers.

Not a goose but related. Tundra Swans were commonly present in low hundreds compared to tens of thousands of geese.

A sub adult Trumpeter Swan on the right with an adult Tundra Swan. Fairly easy to see the differences in the bill size and shape of feathering around bill in this photo. It was the only Trumpeter Swan we noticed. Not sure of its status in Saskatchewan.