So far have managed to bird for the first three days of the Winter List season but that will end Tuesday with a return to office.
Sunday (DAY 2) was a trip to Cape Race with my personal Winter List Bird Dawgs Ken Knowles and John Wells. The first trip of the winter season to Cape Race adds plenty of common birds to the list such as seaducks and alcids. Bonus bird was a Short-eared Owl (nice views). It was good to get a White-rumped Sandpiper at Long Beach and a Dunlin returning to winter at a odd little patch of miner's lettuce. Also a relief to see some small flocks of robins since there are absolutely no berries for them this winter. Horned Grebes and Red-throated Loons were in place at Biscay Bay, the only reliable location in winter. It was late when we got to Trepassey so any hopes of lingering warblers were dashed but it was a relief to get a Gray Jay which can be a real pain to winter list since we don't go in the woods much in winter. At St Shotts I chose to scan the sea for last chance at a gannet or a late shearwater while my bird dawgs went to check out Ken's Kabbages, a little garden 75 m from the lighthouse where over the years an interesting list of vagrants have been found. They came back screaming out WOODCOCK!!! I died on the spot. There hasn't been a woodcock on the Avalon Peninsula in over 30 years. This was a serious rarity missed. Once flushed the odds of finding it again were nil. I learned the hard way to never leave your dawgs. Yes it was American not Eurasian because of twittering sounds of the wings and warm buffy coloured body. It hurts. A very small consolation prize was lucking into a Great Horned Owl hunting by the roadside just north of Portugal Cove South in the twilight. Winter List =  (BM 79) (Tingley 63).

Didn't take many bird pictures on Sunday. This group of four moose out on the open barrens was an unusual sight. 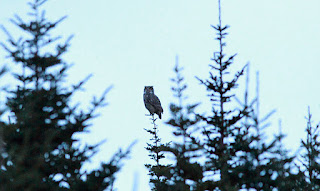 This Great Horned Owl was hunting by the roadside. It was well after sunset. This photo was taken using ISO 8000.  Through binoculars the owl was no more than a dark silhouette but with digital magic the owl came to life.

Monday (DAY 3) I birded without any bird dawgs in the area Ferryland to Renews. Maybe I needed them because I couldn't find anything rare. Started in Ferryland in nice conditions. Lots of junco etc to look through. Just four additions to the Winter List, Dickcissel at a feeder in Ferryland, a high total of six Lincoln's Sparrows, a Ruffed Grouse and a regular overwintering Black-bellied Plover. The high count of Lincoln's Sparrow and 23 Song Sparrows were probably both all-time high one day counts for the Avalon Peninsula.  Winter List = (BM 83), (Tingley 75). 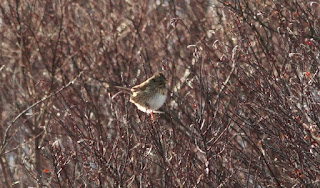 One of six Lincoln's Sparrows found during the day.  A very high one day count but late fall/early winter is the best time of the year to see this bird on the Avalon Peninsula. It doesn't breed on the Avalon even though it is a common breeder in the rest of Newfoundland and Labrador. 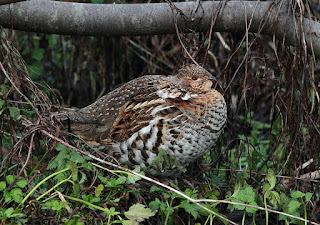 This Ruffed Grouse walked into view from the car while pishing sparrows in a wet patch of willows in Tors Cove.

Posted by Bruce Mactavish at 17:13