Looking for Spring, Hanging on By a String

Spring always was a dirty word in Newfoundland. It never comes while we read about great spring migrations in every other part of Canada and the US. This spring seems worse than ever.  No warm spells or SW winds. What seems like a warm spell now and then is actually temperatures reaching norms for the time of year. This weekend was tough if you were depending on spring birds for your jollies.

Saturday still in search of that Common Shelduck seen in Renews on 3 April I widen the search area to include some spring goose spots in the inner parts of St. Mary's Bay.  I discovered both Cootes Pond and Harricott Pond, my two main targets were still FROZEN.  However, found geese in good numbers at two locations in Riverhead and at O'Donnells where normally relatively small numbers of geese appear. In fact my day total of 442 Canada Geese was a personal Avalon Peninsula high for me. No other species of geese and no rare ducks.

Part of the lure of travelling to the southern Avalon Peninsula was to intercept early migrants on their way to St. John's area. Surely I'd hear a Fox Sparrow and see some roadside robins. NOPE! N'ARN! NOTTA! I was surprised to see only three adult Ring-billed Gulls and I was at the locations of two thriving Ring-billed Gull colonies. Where are they!?

The Canada Geese were forced to different areas because regular spring staging sites were still frozen. Here at the Riverhead boat basin 285 geese were feeding on what I think was eel grass. 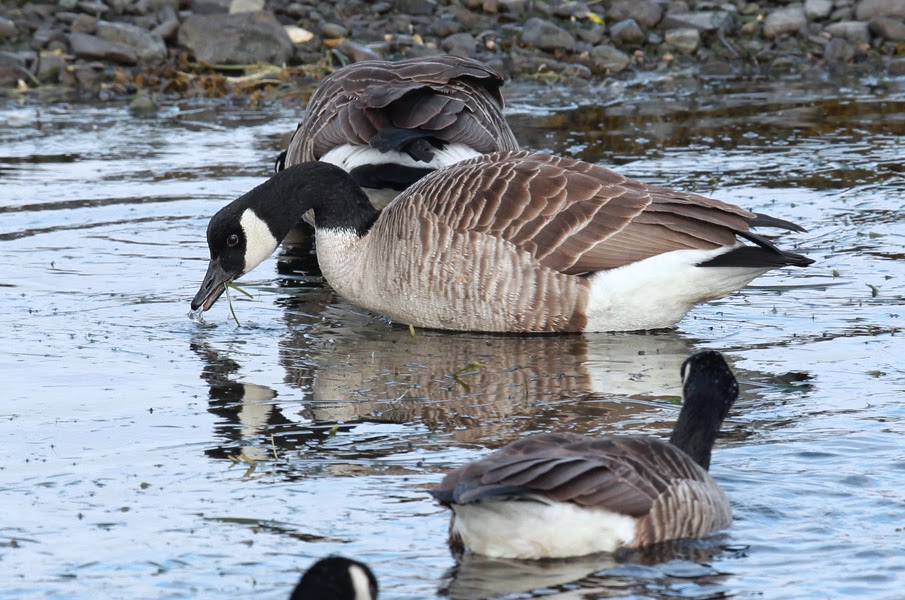 Geese at O'Donnells also were eating what I believe is eel grass.

The geese at O'Donnell's were flushed by a Bald Eagle. Here they are seen headed for the promise land across the bay, the frozen barrens (breeding grounds) of the Branch Barrens.

Sunday morning I went to Long Pond in St. John's where there were reports that the wintering flock of American Robins and Cedar Waxwings was still present. I was greeted with a wall of singing robins. Nice but there was no promise of spring in these birds, These hardy birds were celebrating having gotten through the winter and were still in winter mode looking a little rough around the edges.  A flicker sang but it too was certainly a wintering bird. 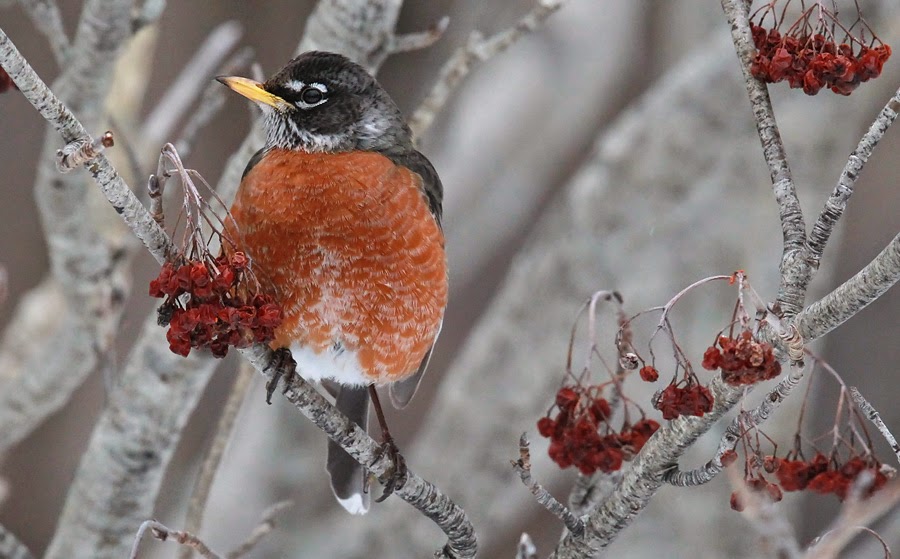 One of about 75 robins at Long Pond singing up a storm eating shriveled dogberries left over from the 2013 crop. The frosty edges to the breast and neck feathers show this bird is still in a winter plumage unlike the glowing spring birds yet to arrive.

What to do on a rainy Sunday afternoon for a bird buzz?  Trying to avoid Quidi Vidi Lake which reminds me too much of winter birding, I went to the harbour and parked on a wharf.  Entertained myself photographing some tame Black Guillemots and... that was as good as it got. That got mundane so was forced to go to Quid Vidi Lake to survey the spring Ring-billed Gulls. Incredibly a mere 8 but I know there were also about that many at Pier 17 sewer outflow. But this is 6 April. RBGUs should be screaming in every parking lot and pond around town by now.  I noticed a fresh dead Herring Gull out on the ice so sat there in the rain with a Tims to see how long it would take for an eagle to find it even in the rain. 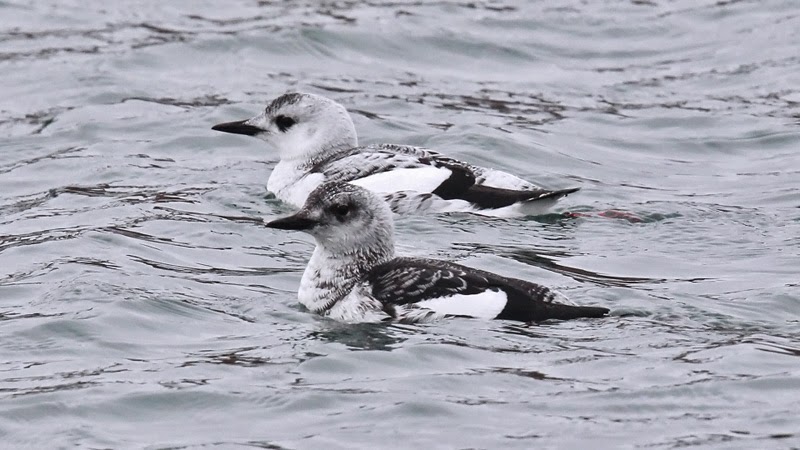 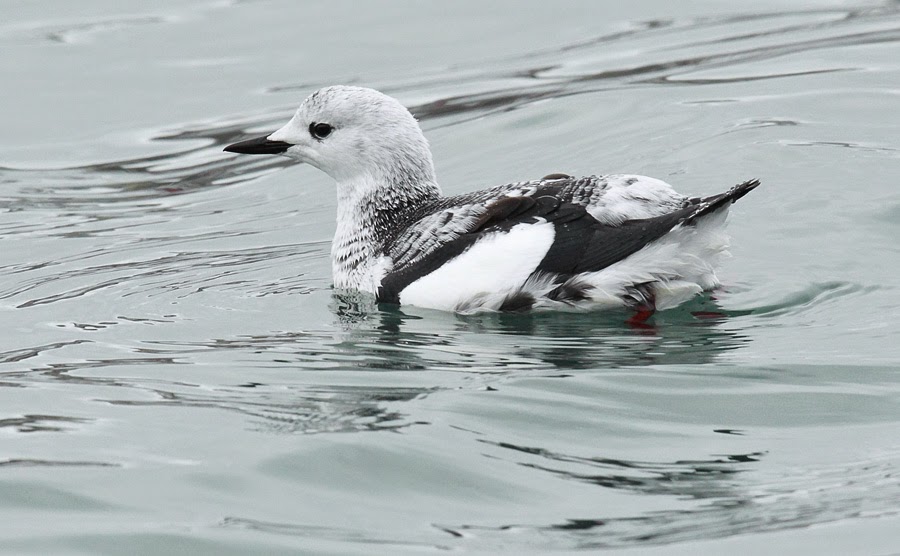 'Sitting on the dock of the bay, watching the tide flow away....'  These three Black Guillemots are in full winter attire still. There were a couple others farther out in the harbour that were about 90% toward breeding plumage but the majority of guillemots around the coast are still in winter plumage.

I threw bread out the car window in both parking lots at Quidi Vidi Lake.  A total of only eight Ring-billed Gulls came in. I should have been inundated with a screaming mass of them on this date. 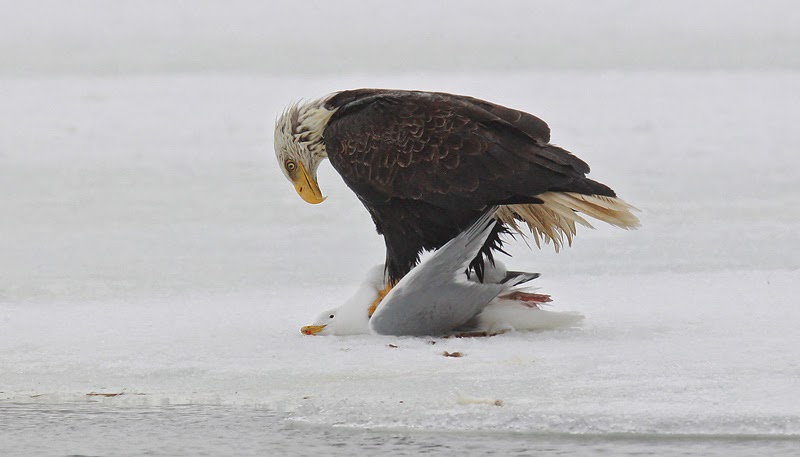 This soggy adult Bald Eagle flew in out of the rain and fog and landed without hesitation on this freshly dead Herring Gull.  A lucky day for this Bald Eagle wondering where to start on its Sunday dinner. 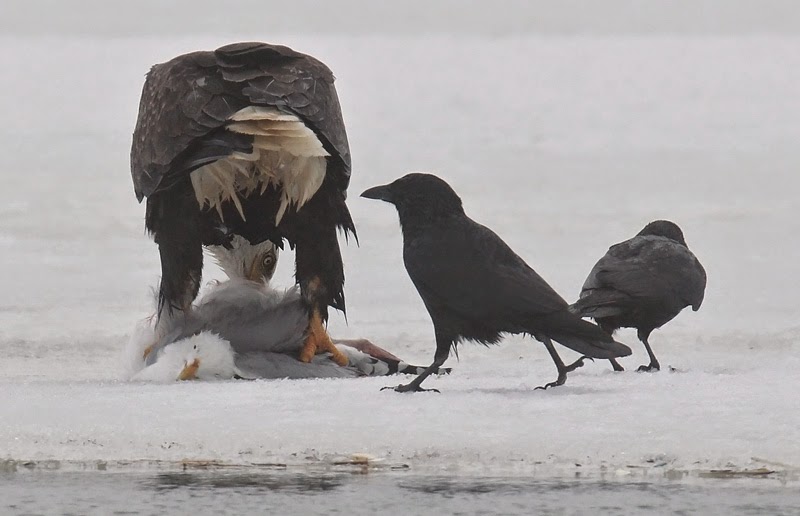 The eagle enjoyed its meal without any interruptions from the other eagles grounded by the rain, but it had to keep an eye out for the pesky crows looking to steal their share. 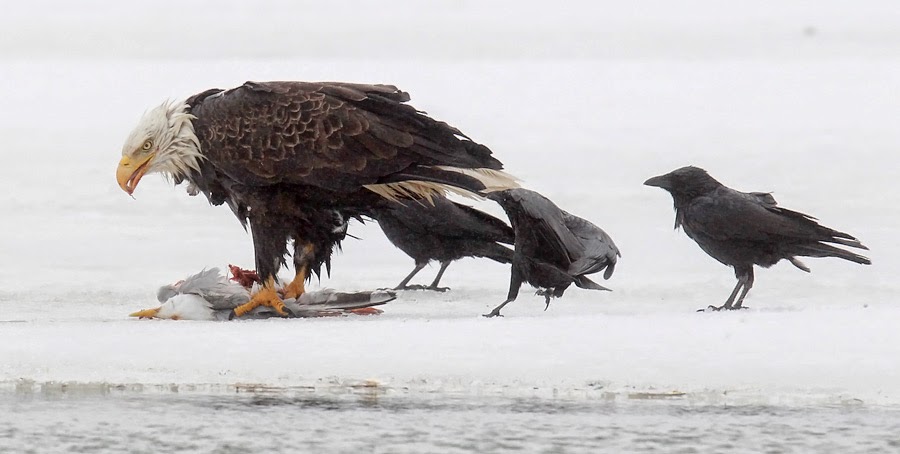 A brave crow pulls on the wing tip of the eagle.  These Quidi Vidi Lake crows are practiced at the fine art of stealing food from the scavenging eagles.  The crows need the eagles to tear open the gull.

Posted by Bruce Mactavish at 05:49