Gets harder each day to go back and edit pictures from a trip that seems so far away now. The first place my wife and I stayed in Costa Rica after leaving San Jose was the Arenal Observatory Lodge. It is difficult to pick a favourite place in Costa Rica when each place is so great with significant differences between each place but out of the three locations visited in 2014 and four places visited in 2008, Arenal might be my favourite location. It has excellent gardens and feeders with a great and varied supply of species. There is good forest habitat within walking distance of the lodge and plenty of very good areas within a short drive if you know where to go (I did not) but the information is there with some research. The lodge area is good birding. The first bird I saw from the back window of the room was a male Orange-bellied Trogon. The deck behind the restaurant provides a huge panoramic view of primary rain forest. White Hawks live here. I saw one. The feeders host an endless supply of exotic colour.  Berry bushes and ornamental flowers attract other species in good numbers. And the peak of the volcano occasionally comes into view depending on the mood of the clouds. The restaurant is excellent. The beer is cold. They make a drink called the White Hawk. 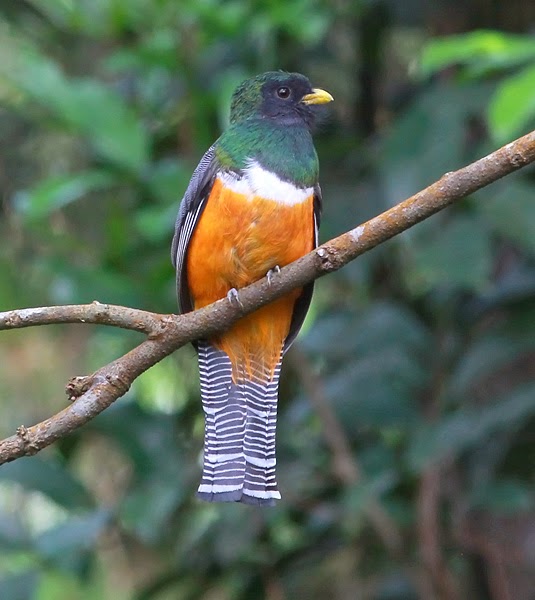 Less than a minute after entering our room at Arenal Observatory Lodge I noted this Orange-bellied Trogon out the back window. 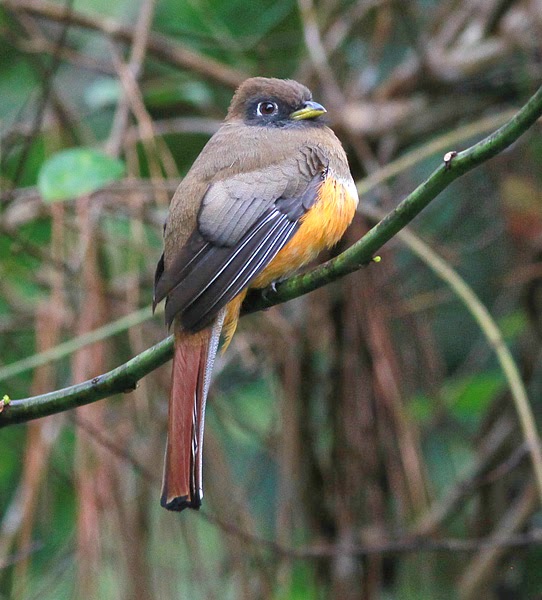 The next day the female showed up.  I saw no other Orange-bellied Trogons during the trip. 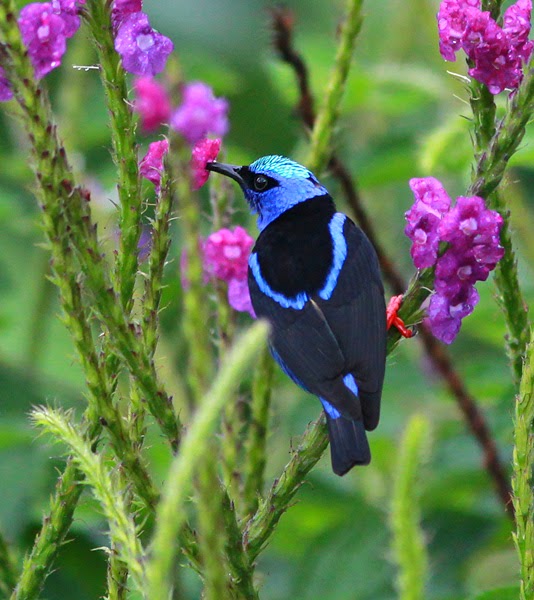 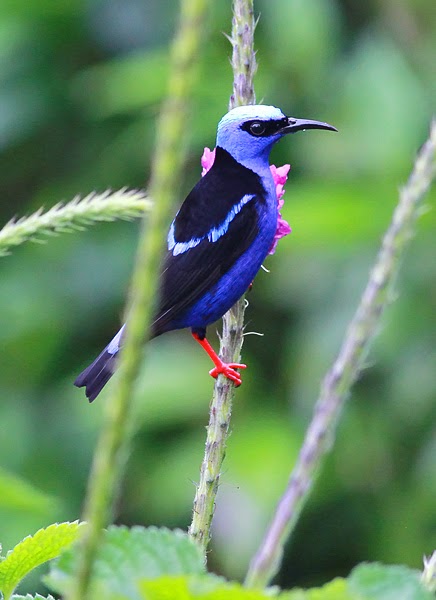 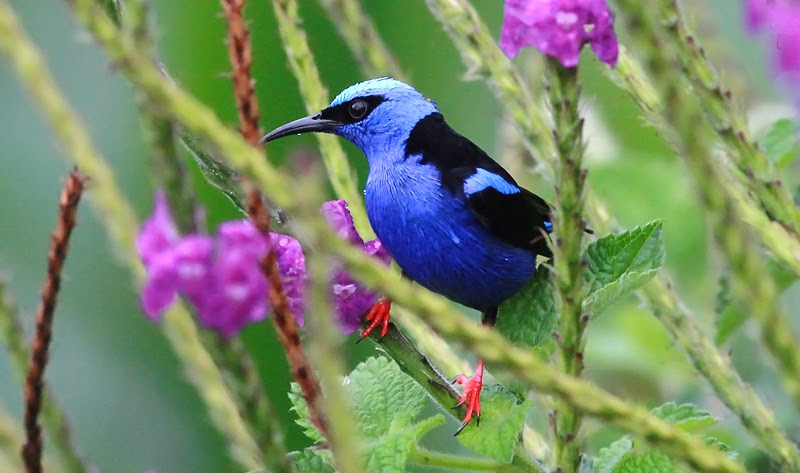 These purple flowers were planted in rows everywhere around the kept grounds.  They attracted plenty of hummingbirds and small flocks of the irresistible Red-legged Honeycreeper. 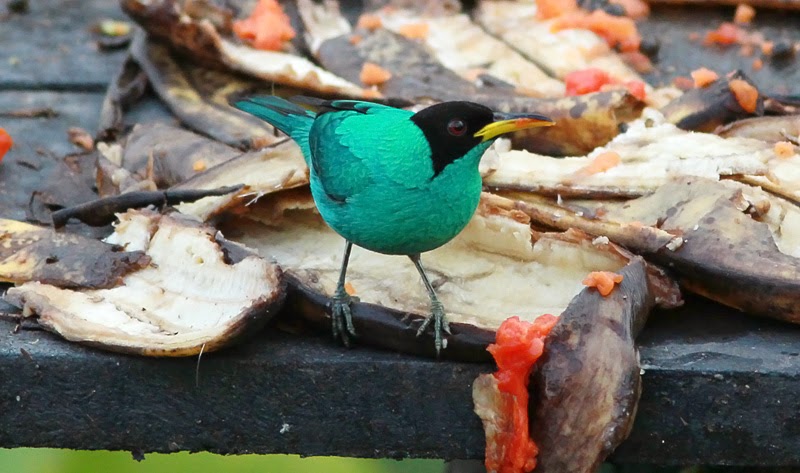 The fruit feeders were well attended but best be there in the first hours of daylight before the fruit is all eaten.  The Green Honeycreeper was a jaw-dropper even among the non-birders sipping their morning coffee on the deck and casually watching the feeders. 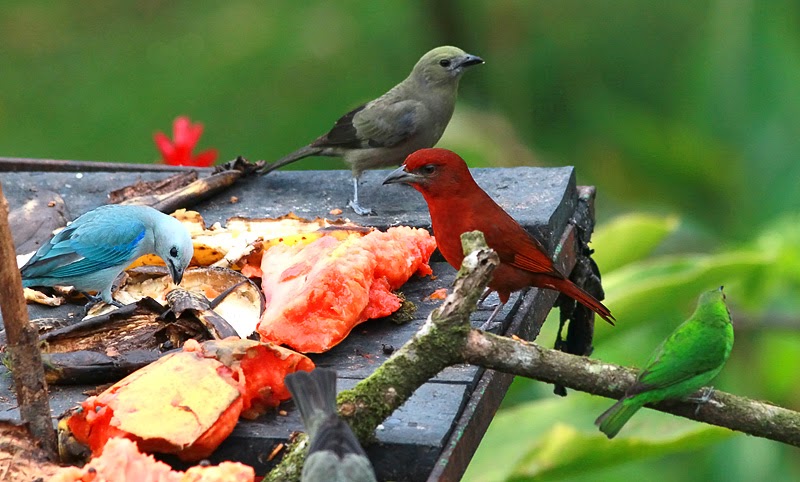 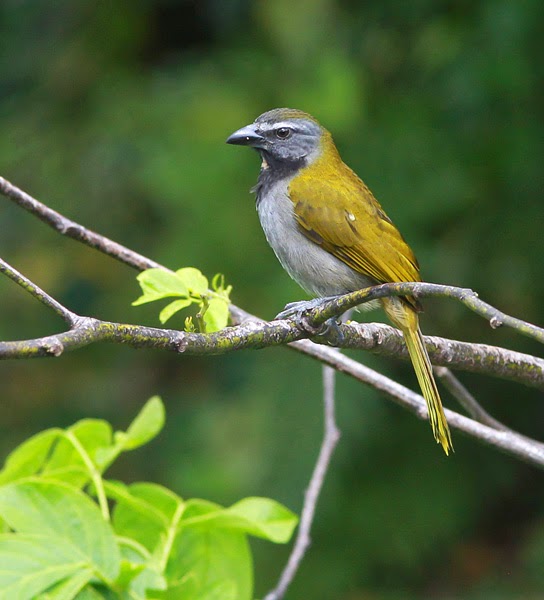 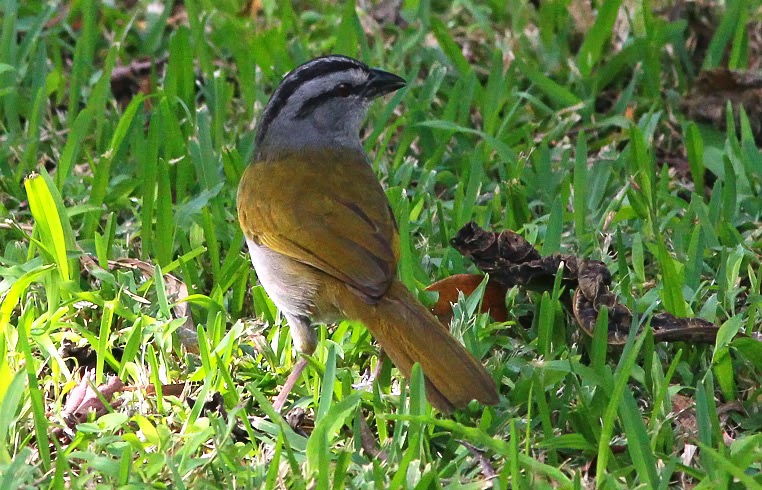 The Black-striped Sparrow cautiously scratched in the shade under the garden trees. 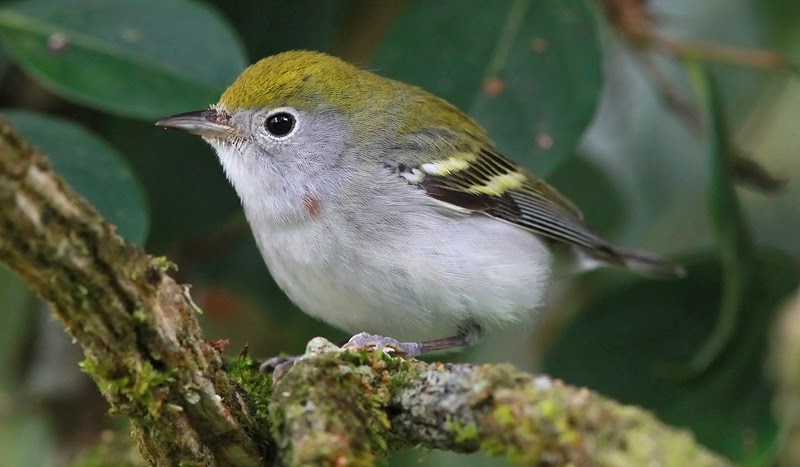 Chestnut-sided Warblers were perfectly at home at Arenal. Wonder why they would even think about flying all the way back to eastern Canada to nest? 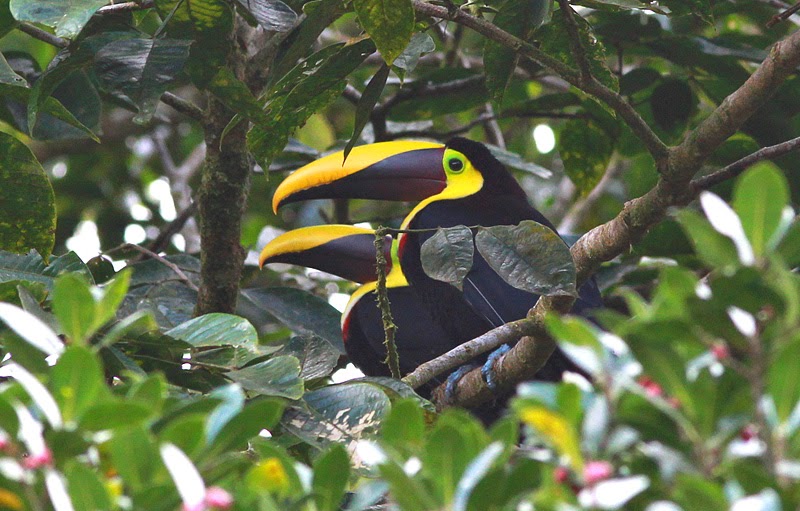 Chestnut-billed Toucan (this photo), Keel-billed Toucan and Collared Aracari are all fairly easy to see around the Arenal hotel gardens. 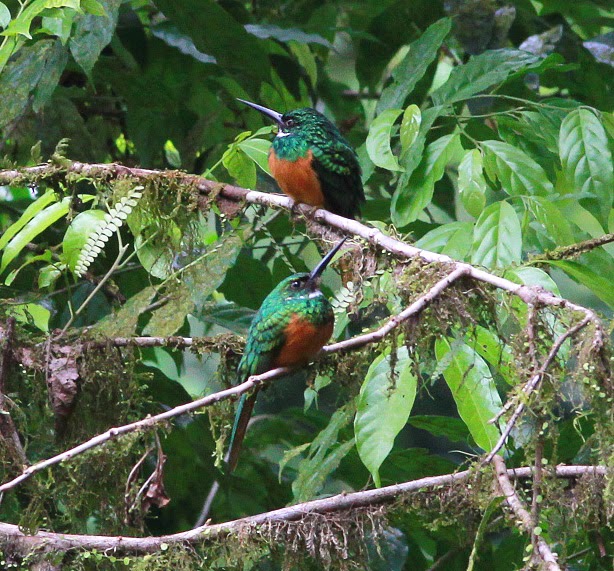 Rufous-tailed Jacamar is one of the many interesting species to be found on the wilder trails within easy walking distance of the hotel. 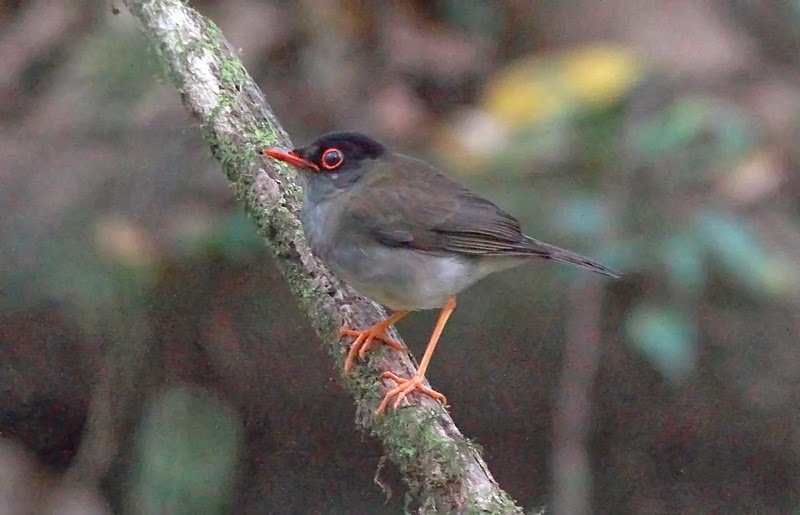 Black-headed Nightengale-Thrush on a deep jungle trail seemed like a very exciting find to me but it is said to be common in the area. It is the only one I've ever seen. Books do not do this bird justice. I am thinking not many people actually see this 'common' species. 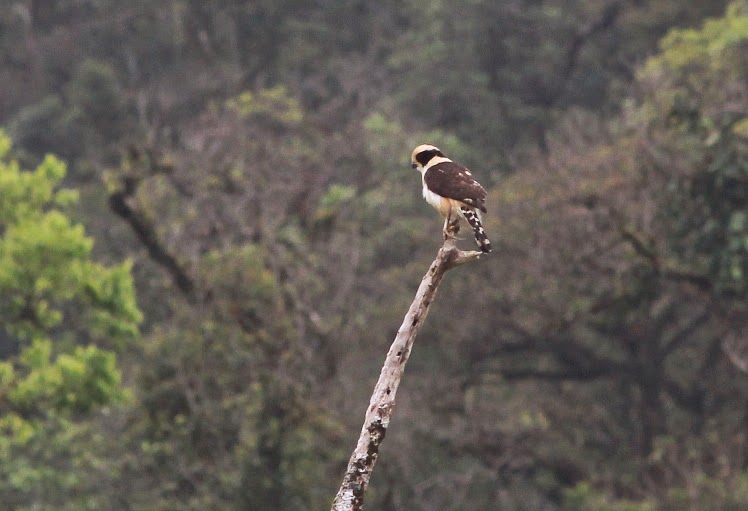 A Laughing Falcon surveys a cattle field for snakes. A new bird for me. 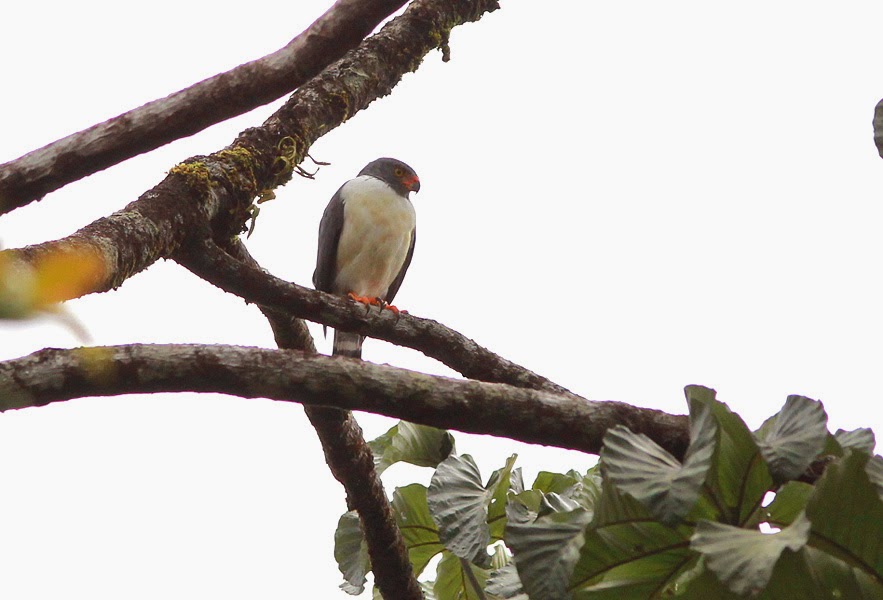 Generally I had the poorest of the poor luck with raptors in Costa Rica. This Semiplumbeous Hawk was the one exception to the rule. 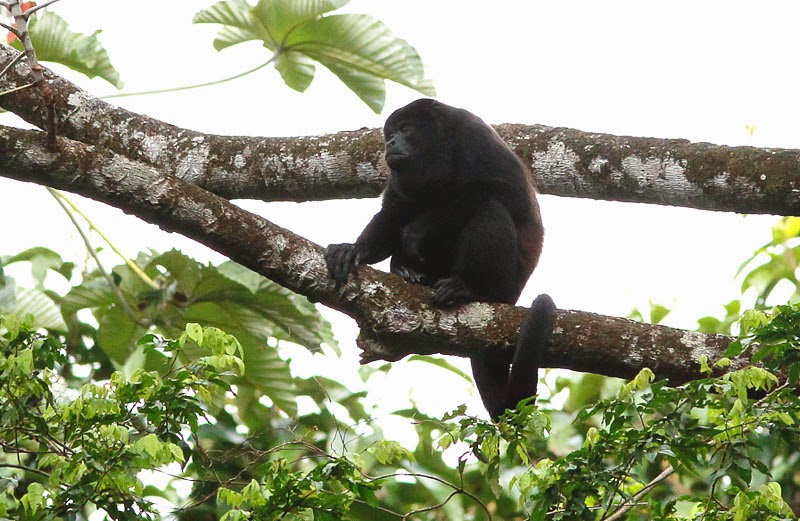 Howler monkeys provided an interesting dawn chorus to the dawn sounds at the hotel. 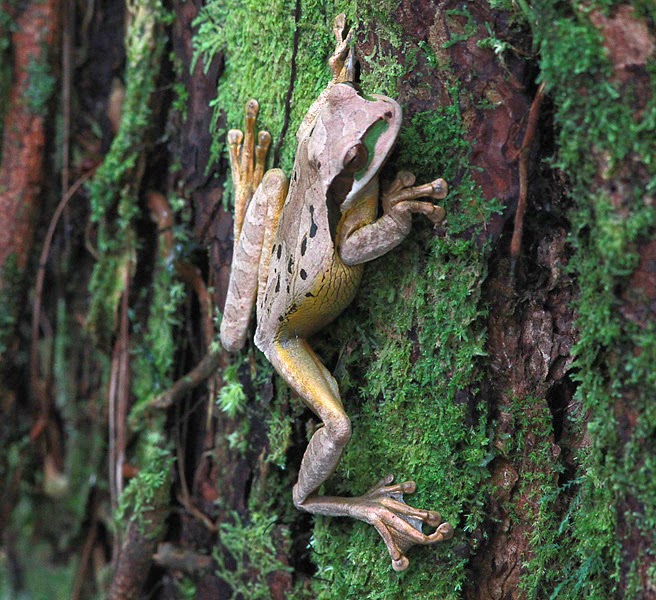 This Masked Frog clings to the side of a rain forest tree just like it should.