Carara National Park, midway along the Pacific Coast of Costa Rica, is one of the best birding locations in Costa Rica.  We stayed in a nearby beach resort called Punta Leona. This gated complex is definitely aimed at pleasing beach goers but the extensive manicured grounds are excellent for birding. The road in from the highway, while busy, goes through some nice forest.  This was a good base for visiting nearby Carara and Tarcoles River. It was also hot and very humid. My Canon EOS 1D Mark IV failed half way through the stay. The mirror was sticking in the up position after every shot.  It was fine again after moving to the cooler mountains but it meant I did not have the camera while visiting Carara.  Carara was the only place I paid for guiding services during the trip. For six hours I had the excellent services of Johan Fernadez.  A true master at getting the birds out of the jungle. The six hours birding with him in Carara was by far the highlight of the entire Costa Rica trip. We saw many nice jungle birds including sweet views of a Streak-chested Antpitta. 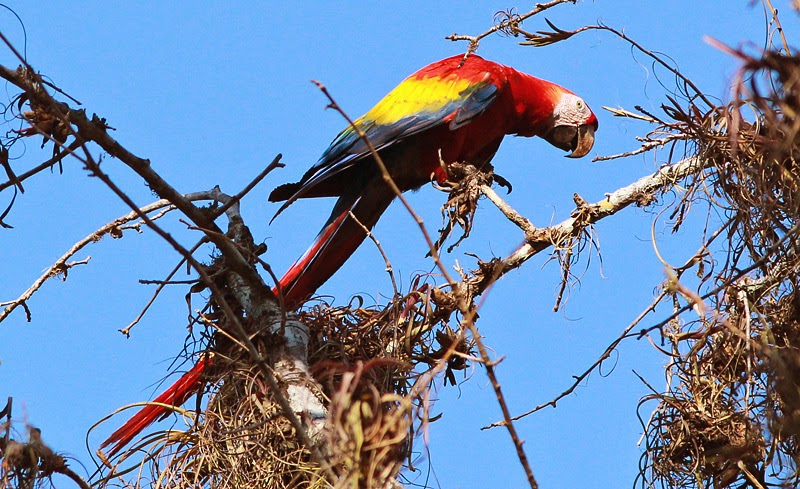 Scarlet Macaw is conspicuous and noisy at the Punta Leona beach resort. I ended up knowing about five nests on the grounds. I am sure there were more. 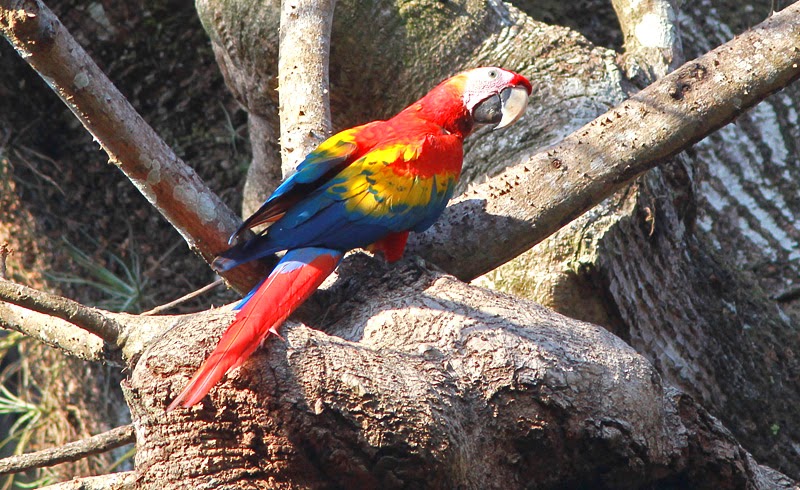 These macaws were present in the evening at holes used for roosting and probably nesting. No matter how often you saw these spectacular birds it was difficult to think of them as free ranging wild birds and not part of zoo set up. 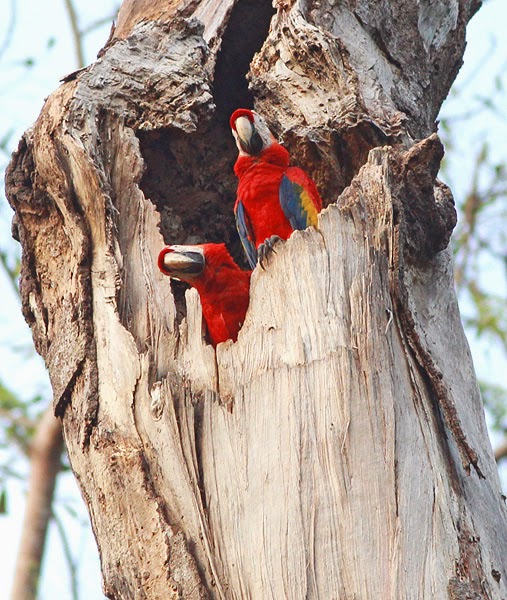 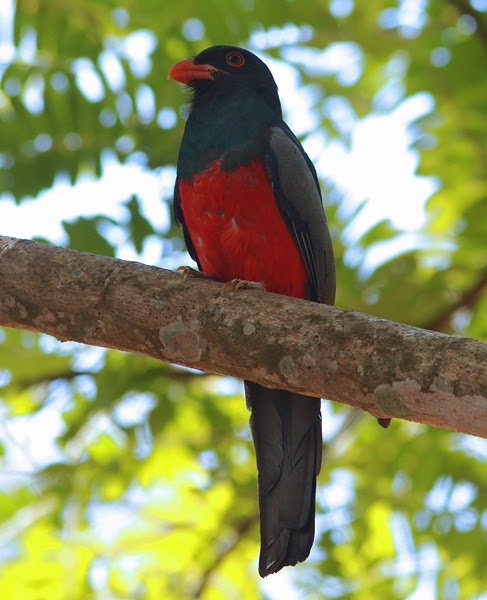 A pair of Slaty-tailed Trogons had a territory by our sleeping unit. 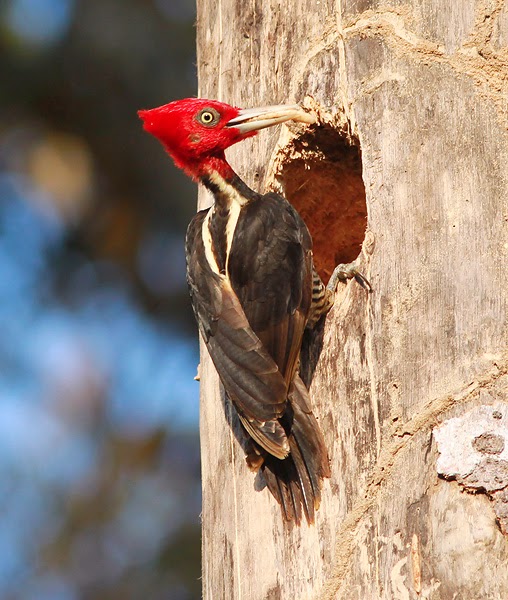 A Pale-billed Woodpecker is bringing this very large grub to a nestling in a tree by the road in the middle of the hotel complex.  An Orange-chinned Parakeet had a nest hole at the top of the same tree. 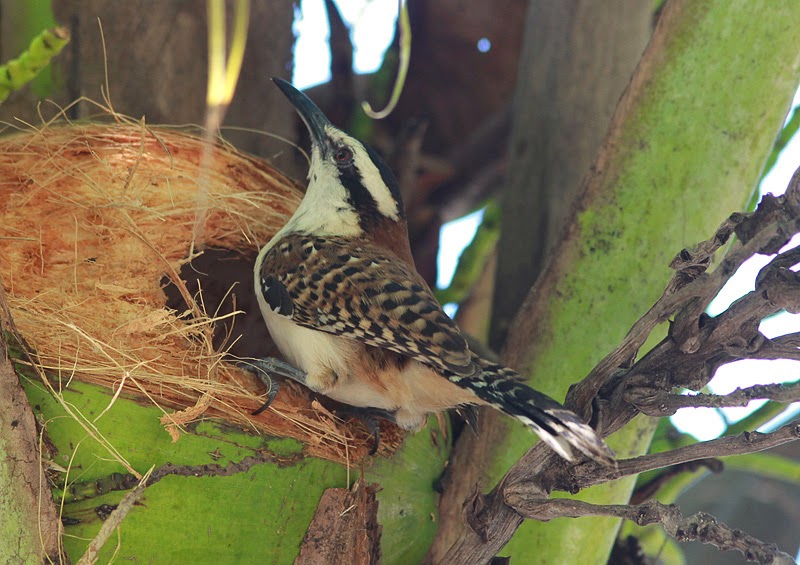 The Rufous-naped Wren was very numerous on the hotel grounds. 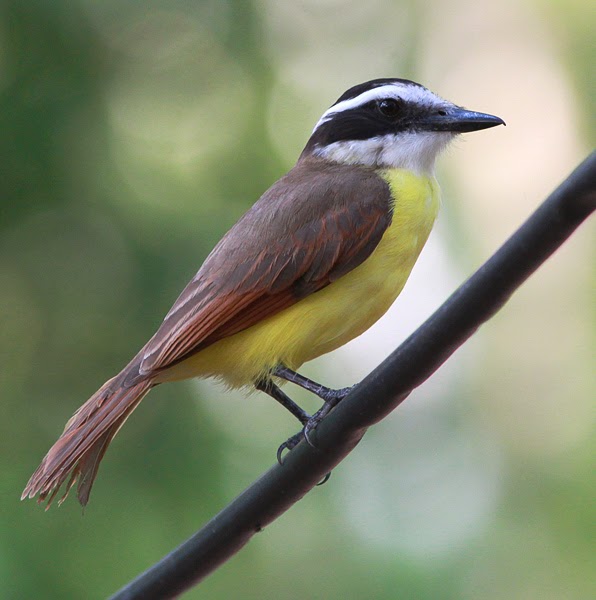 Great Kiskadee and its smaller cousins Social and Gray-capped Flycatchers were rarely out of sight or sound on the Punta Leona hotel grounds. 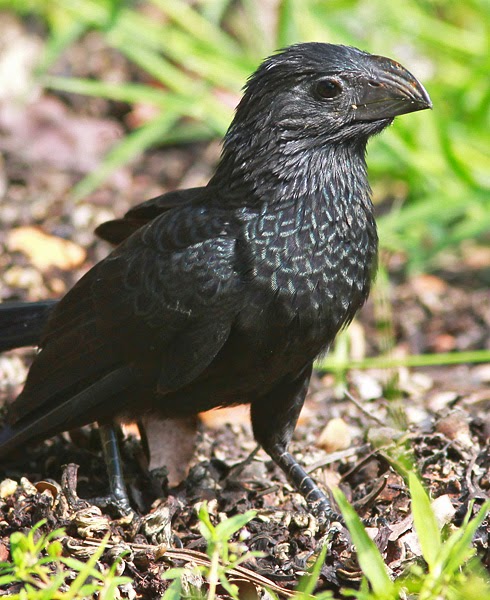 Groove-billed Anis walk with the Great-tailed Grackles on the manicured lawns looking for insects. 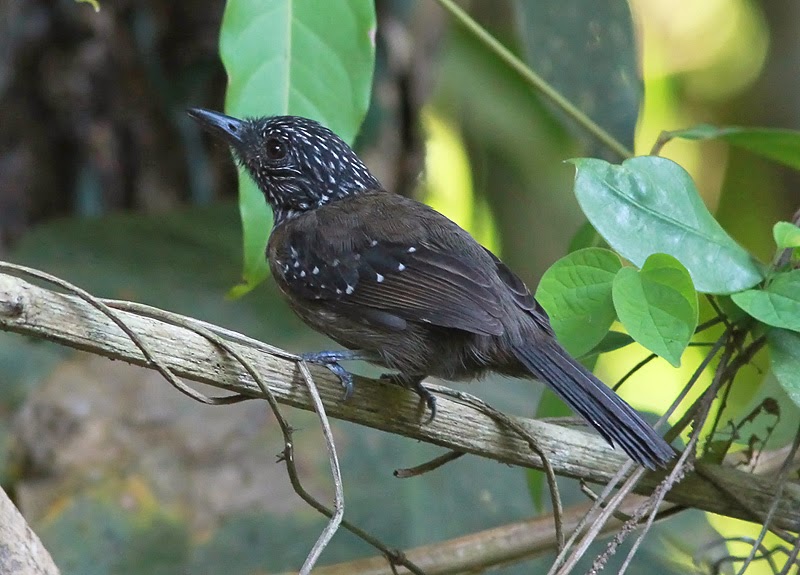 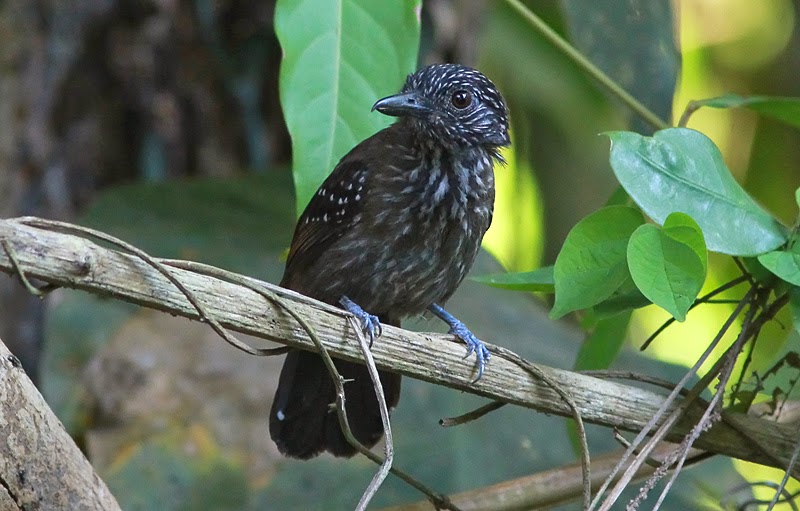 My prize find in the jungle habitat along the road coming into the hotel was this female Black-hooded Antshrike which actually turned out to be fairly common in Carara Nat Park. Oh well it was exciting at the time. 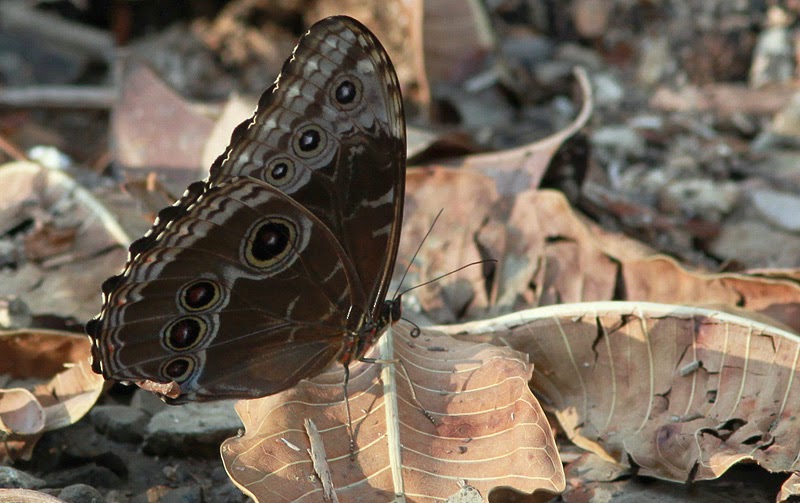 Blue morpho butterflies were common in the jungle habitat. Like waving a sheet of paper up and down that is glowing sky blue on top and brown below this amazing insects turns to leaf brown as soon as it hits the dirt. Costa Rica is full of surprises for a Newfoundland birder but the biggest surprise of all was encountering this crab  in the woods.  How could I have not heard about this one!? They are called the Halloween Crab. It lives on land.  Then I realised  the leaves on the forest floors were moving with many hundreds of these crabs all crawling down slope like an army of alien  invaders.  There were none to be seen the next morning. 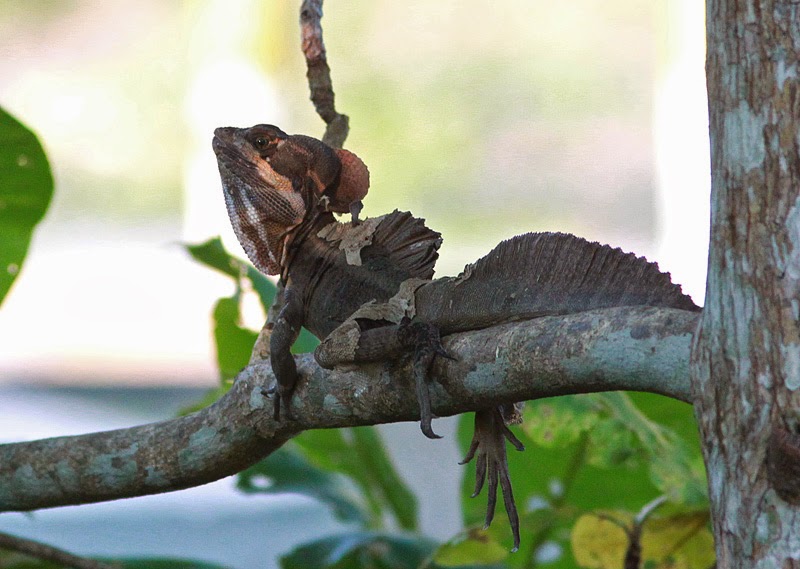 Lizards are a common sight on the hotel grounds. This is called the Jesus Christ lizard because of its ability to run short distances over the surface of water.

The Tarcoles River which empties into the ocean from Carara Nat Park into mangrove delta. There are a number of boat rides into the bird rich channels.  Most people on the boats want to see crocodiles which are unmissable but the boat drivers also know what important birds the birders are after such as Panama Flycatcher, Mangrove Vireo, Mangrove Hummingbird and American Pygmy Kingfisher.  Missed Mangrove Hummer on this trip but luckily did see it on the same boat ride in 2008. 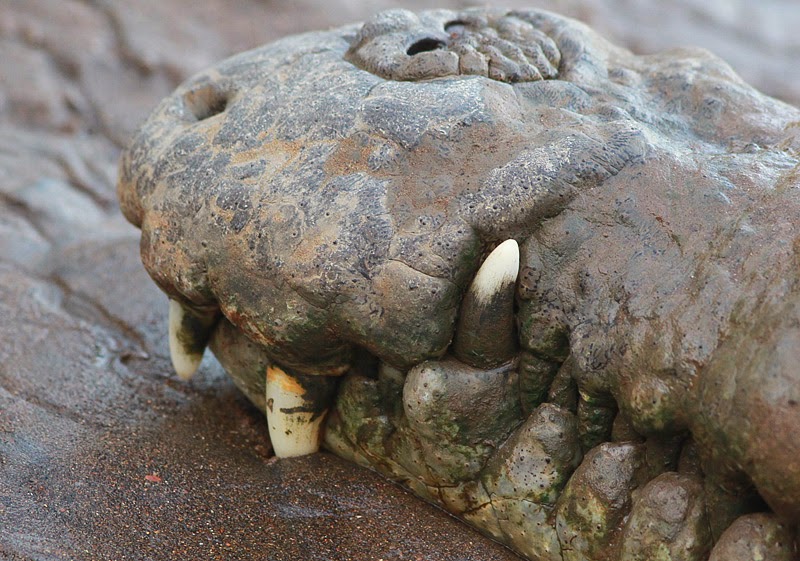 The Tarcoles River crocodiles are very friendly.  This one looks like it hasn't brushed its teeth in a while and it doesn't care. 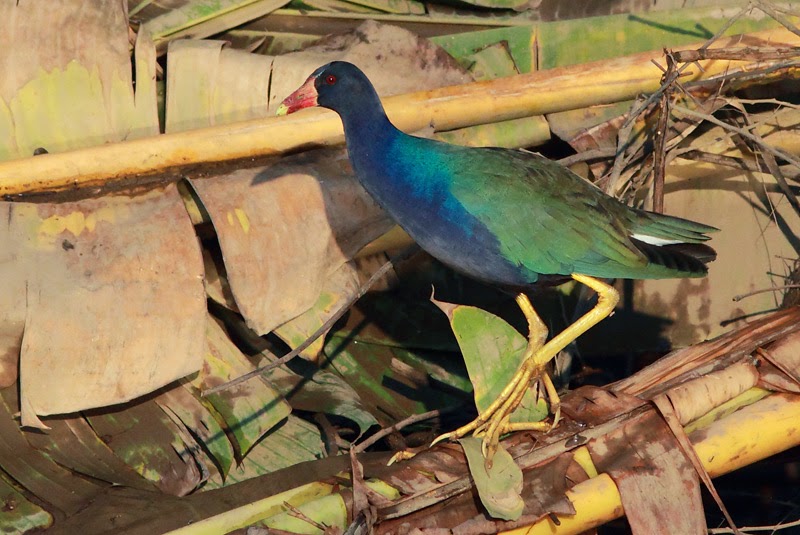 Purple Gallinules and several species of heron (even Great Blue Heron) and egrets were familiar North American birds numerous along the river. 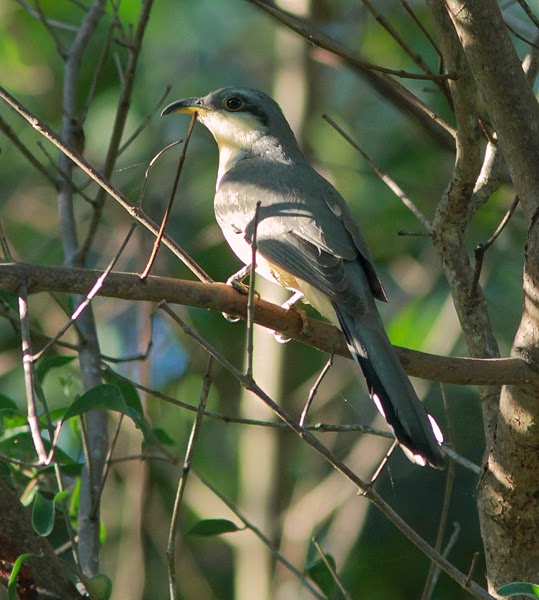 A Mangrove Cuckoo in the mangroves was a life bird. 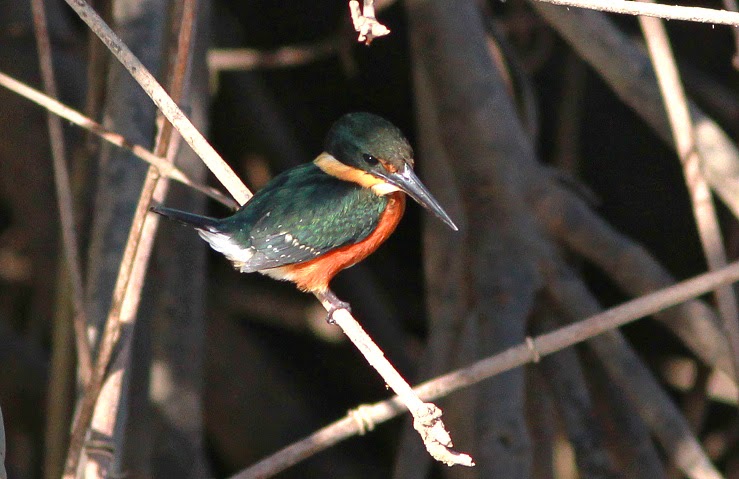 American Pygmy Kingfisher was just one of five species of kingfisher we saw along the river  Many people add it to their life lists on this trip, as I did in 2008. We had good looks at two on this trip. They are about one third the size of a Belted Kingfisher.

Posted by Bruce Mactavish at 15:47