On the dry prairie regions of southern Alberta, water holes are a valuable resource that has to be shared by birds and animals. Birds are highly territorial at the beginning of the breeding season and sometimes bring their fighting spirit to the communal watering holes.
Near Writing-On-Stone Provincial Park I came across a watering hole built for cattle.  A handful of shorebirds came and went - Willets, Avocets, Marbled Godwits and Wilson's Phalaropes.  I witnessed a particularly aggressive Willet fly in calling loudly and attack another Willet that had been feeding there for 15 minutes.  The first Willet stood its ground and would not be moved by the persistent aggressive antics of the new Willet. Maybe these two birds already had a history between them.  The Willet battle lasted nearly a minute before it was broken up by a Marbled Godwit.The original Willet won out and continued to feed while the aggressor flew off without feeding. 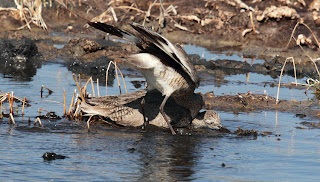 An intruding Willet flew in calling loudly and attacked a feeding Willet by grabbing it around the neck and forcing it into the water.﻿ 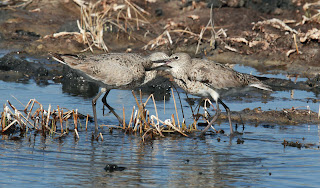 Both Willets grabbed one another around the neck  and began pushing back and forth.﻿ 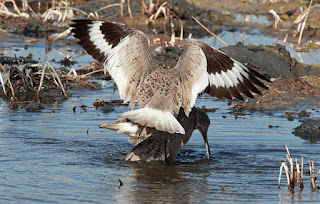 The aggressor broke free and tried to get on top of the other Willet and push it into the water.﻿ 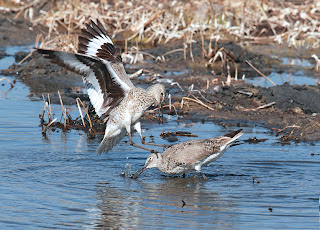 Despite the fierce attack the original bird stood its ground. when it could have simply flown away.﻿ 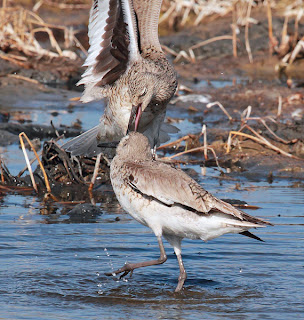 When all else fails go for the head. 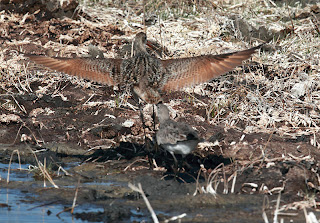 A Marbled Godwit quietly feeding nearby could no longer stand the commotion and flew over screaming loudly and broke up the melee.﻿ 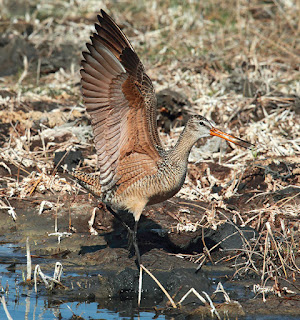 The bouncer flexes its out stretched wings triumphantly while the Willets separate. 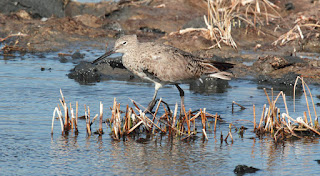 The original Willet won. It stood its ground and went back to feeding looking only a little ruffled in what sounded like a fight to the end. 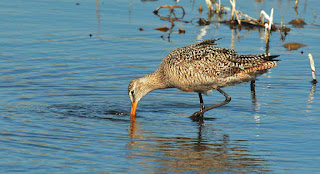 With peace and quiet restored, the godwit went back to feeding.﻿