I was birding in Alberta May 3-11, 2013. The purpose of the trip was largely to try out a new lens - the Canon 600 mm f4 version II.  Alberta has lots of great targets for a photographer.  Having been there a half dozen times during the breeding season in the last dozen years I had a pretty good idea what to expect and where to go. What I didn't expect was how the exceptionally cold month of April would severely delay the  arrival of spring migrants. During the first three days of the trip I saw no more than a handful of blackbirds. But the weather was excellent during my visit and migration soon caught up to normal.
The Alberta sloughs are great for photography with lots of large species to shoot at - Yellow-headed Blackbirds, Wilson's Phalaropes, five species of grebes, and endless ducks. But I am always drawn to the southeast corner of the province. Here the prairie is more arid. Sage brush grows. The Red-tailed Hawks disappear and the Ferruginous Hawks take over.  Sage Grouse may still occur here.  People look for Mountain Plover with half a realistic chance of seeing one. (I've yet to connect). Sprague's Pipit is common.  I particularly enjoy the breeding longspurs. Colourful and numerous, their songs breath life into the prairie.

McCown's Longspur is the uncommon species.  I happened upon a little fallout of migrant McCown's after a day of strong north winds.  A ten km stretch of road near Wildhorse contained 150+ McCown's right on the road and by the flock on May 8. This was exciting for an east coast birder. Got more good looks at the species then all my previous trips to Alberta combined.  Photo opportunities were good.

The new lens performed well.  The new Canon 600 mm is very sharp, even with the 1.4x and 2.0x converters and there seems to be some extra magic with the image stabilization.  I am being conservative here - the lens is in a nutshell phenomenal!

Below are some McCown's Longspur shots. I hope to get to other Alberta species before the trip becomes a distant memory but already we are planning a five day trip to bird southwest Newfoundland this weekend which is going to no doubt produce more priority photos that will need to be look at. 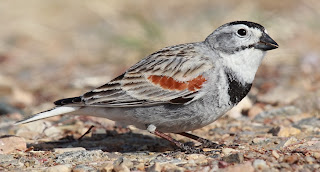 The male McCown's Longspur is far more attractive in life than any illustration has made them look.﻿ 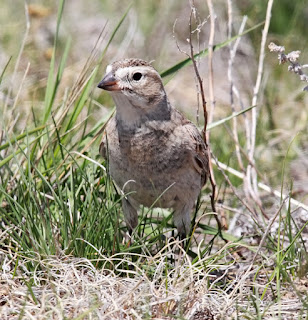 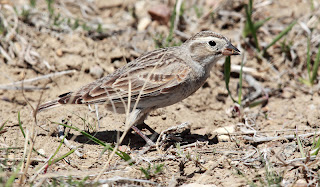 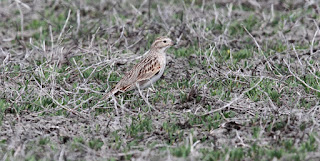 I imagine the female McCown's Longspurs is poorly known in life. During the nesting season they vanish from sight because they are incubating eggs.  Later in the summer (August) when the birds are fledged and longspurs form small mixed flocks in southeast Alberta, they are wary and difficult to view let alone separate from the more abundant Chestnut-collared Longspur.﻿