The memory of fabulous birding for nine straight days in Alberta at the beginning of May 2013 is already being placed in storage on the dusty top shelf of my brain. The best of the trip photos are in danger of being buried for good without ever being looked at again. That is the way in this day and age where there isn't as much time as there once was for looking back on what you just did.

Tonight I made time to tackle Alberta grebes. There wasn't a big selection of photos to look through. Eared Grebes were just getting back to breeding colonies on selected sloughs in early May when I was there.  Horned and Red-necked Grebes were migrating north but stopping to rest on flooded fields that would be grazed by cattle in a few weeks. Western Grebes were also just getting back but it was with this species  that I had one my euphoric Alberta photo moments. 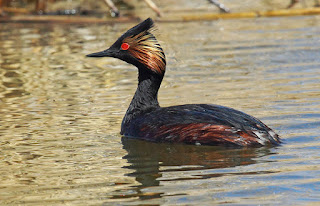 Eared Grebe is so common in southern Alberta that it might as well be the slough starling. This one is wet after a session of active diving for food. 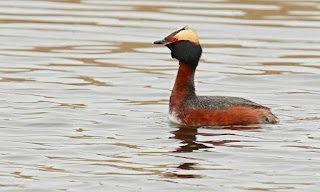 The Horned Grebe is a common breeder in isolated pairs in the deeper ponds among the aspen belt of central Alberta and other areas farther north. 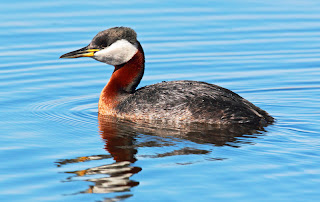 My only close encounter with the Red-necked Grebe was during mid-day when lighting conditions were tough for proper exposure with the camera. 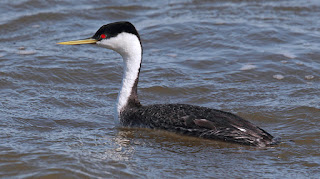 The Western Grebe is the favourite  grebe of east coast birders. Not just because it is so rare but also because of its unique long, black and white neck. 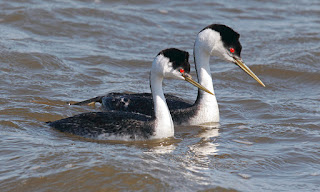 I lucked into a Western Grebe situation at famous Lake Pakowki in southeast Alberta. The water was high on the shoulders of Hwy 885 crossing the western finger of the lake. Some of the Western Grebes were interested in diving under the bridge allowing for good photo opts from within the car.  It must be the male with the larger bill in this photo. There was lots of  vocal and physical interaction  between the 15 or so birds brave enough to dive near the bridge. Over all a blissful show for an east coaster. 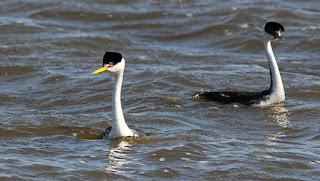 Part of the display of Western Grebes involes stretching the neck.  They must have elastic tendons holding the neck vertebrae together.. 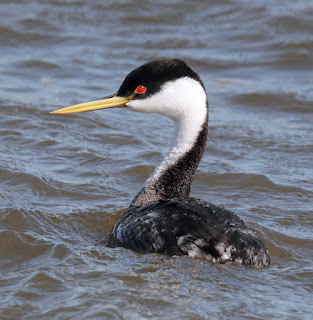 The Western Grebe is a classy bird.

Posted by Bruce Mactavish at 18:41