You know you live in a bird impoverished province when seeing blackbirds on a mainland trip is good. Alberta has a full suite of Canadian blackbirds including prairie specializing species the Yellow-headed and Brewer's Blackbird. In Newfoundland when you say Redwing you are talking about the thrush.  The full name Red-winged Blackbird is required for that species which is only marginally more numerous. 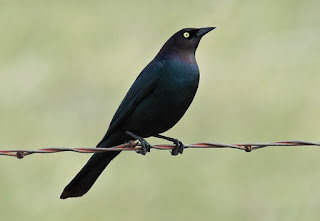 The male Brewer's Blackbird is a smart looking bird when you look at it closely.  It is common and widespread in Alberta covering a variety of habitats ranging from open prairie to more wooded areas. 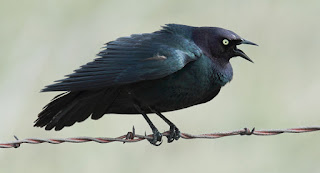 The song and display of the male Brewer's Blackbird is nothing to rave about. 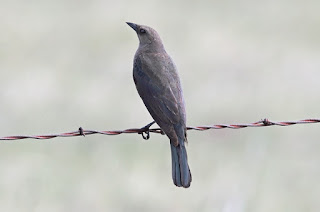 The female Brewer's Blackbird is a plain brown bird but with the sleekness of the male. 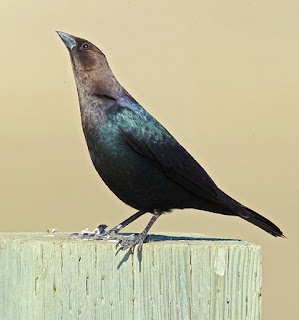 A male Brown-headed Cowbird does its best banana shape pose to impress a nearby female. 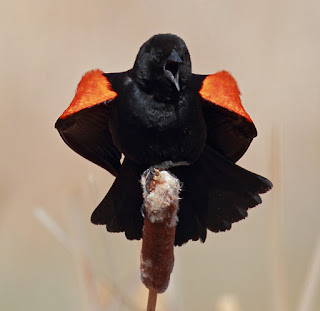 Red-winged Blackbirds are a part of every slough and wet ditch in Alberta. 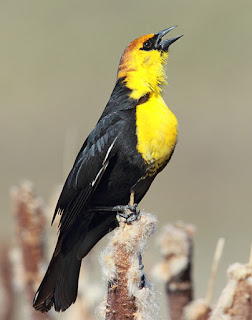 Yellow-headed Blackbirds are abundant being semi-colonial in the richer cattail marshes in Alberta.  Like breeding plumage Atlantic Puffins in Newfoundland, they are so gaudy that you become blase about them in short order.