Weekends are paradise for active birders forced to work during the week. This past weekend of 26 & 27 Jan I was birding dawn to dusk (barely 9 hours at this time of year) with visiting Gull Watchers from Europe - Chris Gibbons from Scotland and Peter Adriaens and Jan Baert from Belgium.
Most of Saturday was spent watching gulls at Quidi Vidi Lake.  The recent cold weather forced the gulls to bath and drink in the remaining open water at the two stream entrances to the lake.  There was constant change over of gulls at the Virginia River river mouth.  Much of the day was spent here watching the variety of gulls at the Virginia River mouth.  No rare species of gull were seen but a few hybrid combinations were seen. 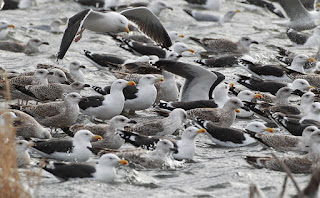 The restricted open water at Quidi Vidi Lake concentrated the bathing gulls. The Great Black-backed Gulls muscled into the prime bathing site where they could stand  up in the shallow water to bath and preen. 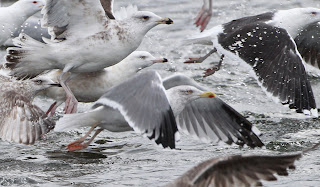 A number of hybrid gulls were sighted. This is suspected to be a hybrid Lesser Black-backed x Herring Gull. In life the back colour was about half way between a Herring and Lesser Black-backed Gull. The legs were a milky pinkish /yellow colour with a slight cast of yellow.  Note than P10 is not fully grown. it is very late for an adult large gull to still be growing the outer most primary. 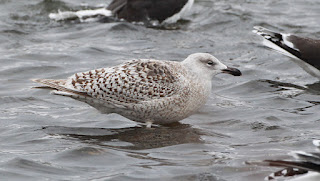 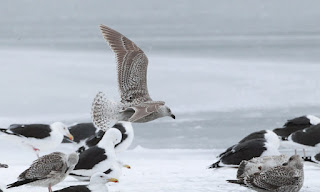 The pale outer primaries being the colour as the back are strong indications that this is a hybrid Great Black-backed x Glaucous Gull.  This feature is viewable in flight and at rest.  This is the typical look of this regular hybrid combination in 1st winter plumage in St. John's during the winter. 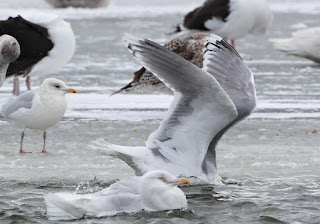 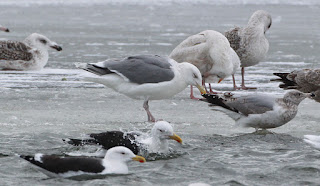 An adult gull is presumed to be a hybrid GBBG x GLGU.  It was a large gull about the size of a large GBBG.  The upper parts colour was just a little darker then a Herring Gull.  The wing tip pattern was similar to an adult GBBG in having a long pure white tip to P10 and a thin subterminal bar on P9.  Typical adult GBBGxGLGU hybrids in eastern Newfoundland look much like a GBBG but with a white wing tip like a GLGU.

For a change of scenery from the city the visitors needed a trip down the Southern Shore on Sunday. 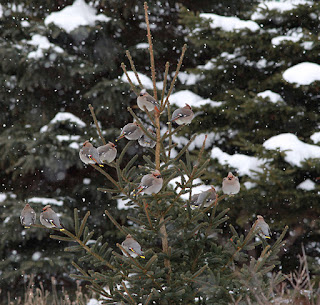 Bohemian Waxwings have been very scarce this winter because of the lack of berries.  A small influx has be present in eastern Newfoundland in the last week or so.  These were in Ferryland. 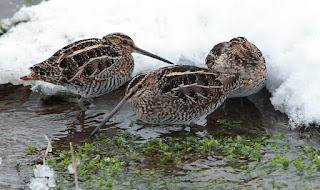 A day total of six Wilson's Snipe was impressive for late January. These three were in a ditch beside the road in Ferryland. They provided a good study for those checking out the differences between Common vs Wilson's Snipe. 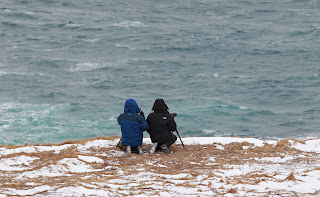 Chris and Peter spend time looking at the features of borealis Common Eiders present in fair numbers at St. Shotts. 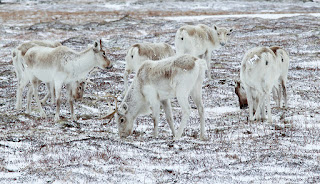 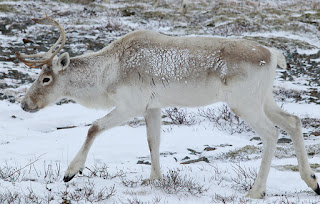 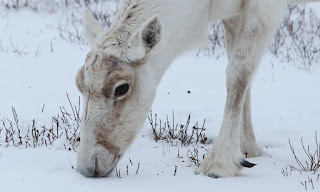 A good size herd of 48 caribou were on the St. Shotts road.

Posted by Bruce Mactavish at 17:14