The weather on Day II of the Wings tour was so nice again that we had to make the first stop of the day at Cape Spear. Cape Spear is a beautiful place no matter how many hundred times you go there. On a calm day it is magical.   There wasn't a huge amount of action. A few Dovekies among the numerous Black Guillemots on the water. Number of Great Cormorants on the wing. Distant Common Eiders and Long-tailed Ducks.  The swell was lower today allowing the Purple Sandpipers to get close enough to the slimy algae zone to feed for the first time in days.

The flock of Purple Sandpipers flying around the tip of Cape Spear was estimated to be 60 individuals but a count  on computer screen revealed 104!   Gulls and shorebirds in flight are generally underestimated.  If you don't believe it - count 'em.

The rest of the day was spent in bird rich St. John 's.  Spent time at Quidi Vidi Lake. While waiting for a mega gull to show up there were lessons on gull identification and aging. 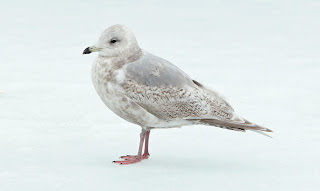 A 2nd winter Iceland Gull?  The wing patterns and body plumage back up the 2nd winter theory. There is so much gray in the back and the bill is showing a yellowish tinge, could it be a delayed 3rd winter?  Gulls are rarely perfect examples of the image conjured up in our minds from reading the classic gull guides.

Ducks were an afternoon theme.  A little hole of open water at Kent's Pond had 24 Tufted Ducks.  I've not seen Tufteds in this tiny hole of water before. The purple sheen on the heads of the adult drakes shone brightly in the sunlight at point blank range.  The HSC pond had the wigeon flock. There were 34 wigeons (25 Eurasian and 9 American) grazing on the grass like cattle in a hay field.  Excellent comparison views of the ages and sexes.  A trip to Kelly's Brook was required for a close look at a Common Teal.  The willow forest seems like an odd place to see teal.  The one drake was there.  There are others elsewhere in town but less predictable to whereabouts. 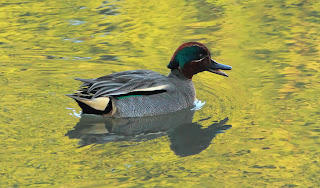 This Common Teal living in the depth of Kelly's Brook was a crowd pleaser.  Its call sounded like an American Green-winged Teal.

Posted by Bruce Mactavish at 19:09