The storm of 11/12 January in eastern Newfoundland was the worst blizzard in recent years. St, John's airport recorded NE wind gusts to 111 km/hr and about 55 cm of snow though they admitted at the airport they were have trouble getting accurate snow fall recordings in that wind.  Winds at Cape Race and Cape Pine topped at 130+ km/hr.

24 hours after the storm I came across this young Hooded Seal in a parking lot in Quidi Vidi Village.  Great chance for photos of this uncommon animal.  Carefully I stalked it from the car until I realised it was dead.  Must have died in its sleep. No signs of trauma.  A storm waif?


There numerous reports of Dovekies showing up in backyards, driveways, roadways etc on the northeast Avalon Peninsula on the day after the storm. The prolonged powerful winds were too much for many Dovekies.  A surprising number were found dead on Holyrood beach at the very bottom of Conception Bay.  Ian Jones estimate 120+ dead on the beach with hundreds more very tired birds resting in the harbour just after the storm. The birds had no place to go after hitting the bottom of the bay at Holyrood. Some were seen flying inland. More food for the ravens.  I checked out the carnage two  days after the storm. There were still some birds in the bay and dozens of carcasses on the beach. In all my years birding in Newfoundland I've never seen anything like this where the birds died in such numbers. 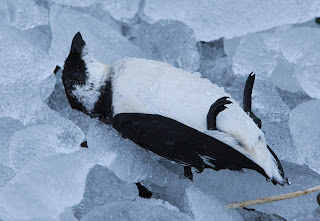 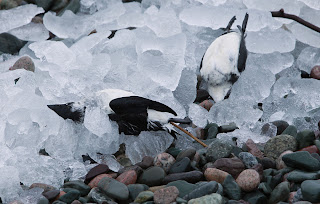 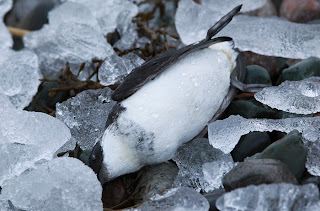 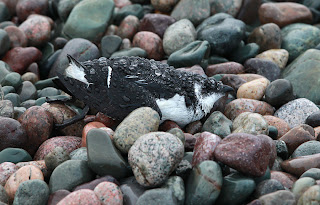 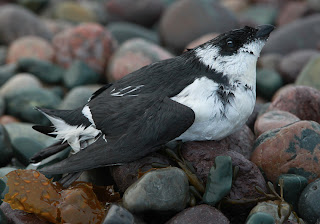 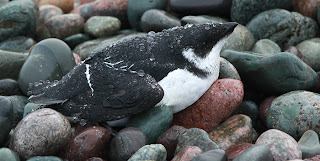 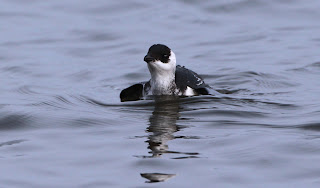 All was not death and carnage. There were still plenty of healthy looking Dovekies that survived the storm. This bird was diving so vigorously it was hardly up long enough to get its picture.