The Gull Watching season got off to a slow start this winter for a couple of reasons:  1) the abundance of non-gull rare birds to look for over Christmas and into the New Year kept birders busy and 2) because some of the regular gullers are basically MIA.  Over the last week with a couple of bird tours in town looking for rare birds like Yellow-legged Gull, Quidi Vidi Lake was getting a good going over several times per day. No YLGU or Slaty-backed Gulls were found.  Just as the bird tours leave a crack duo of world class gull aficionados has arrived in town for ten days.  They are Chris Gibbons of Scotland and Peter Adriaens of Belgium. These guys use their holiday time to travel the world with the purpose of seeing gulls. Usually they work independently but this time together.  They are here to photograph gulls. You'll probably see them if you visit Quidi Vidi Lake between now and Feb 5. 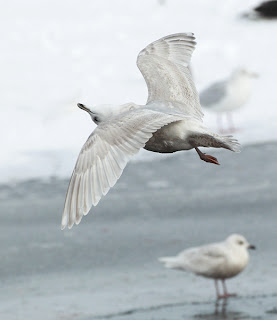 No gulls will go by unnoticed at Quidi Vidi Lake even if sleeping on the wing. 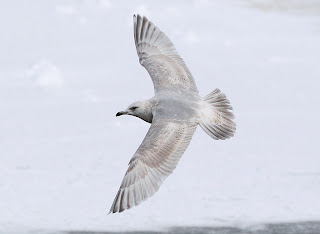 Flight shots of Iceland Gulls will be a main target for the visiting gull watchers. 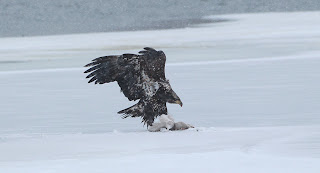 Hopefully Bald Eagles scavenging the occasional dead gull or just loafing on the lake will not become a hindrance to gulling.  This one on Saturday evening, having frozen young Glaucous Gull for supper during a snow squall, cleared the lake of thousands of gulls with its arrival. 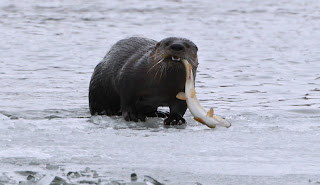 The otters are more of an extra entertainment value than a hazard to gulling at Quidi Vidi Lake but the gulls are certainly wary of its presence. This otter ate three large brown trout within an hour on Sunday at the Virginia River mouth. It left the heads for the gulls.

Posted by Bruce Mactavish at 07:14