The Last Weekend of Christmas Holidays

It was an excellent 16 day Christmas Holiday. Three Christmas Bird Counts and bird action so good in St. John's there was no need to leave town.  The last weekend of the holiday was a mop up things I planned to do but hadn't got around to it.  Gull photography was one area that got badly neglected due to the warblers and other rare birds to look for.  When Quidi Vidi Lake froze over Saturday afternoon I planned to for a full day of gulls on Sunday. But the -12C and cold wind kept gulls numbers at a minimum resulting in poor gull watching.  Vast numbers of Iceland Gulls crammed into St. John's harbour - probably  3000.  However, the bright sunlight made photo conditions poor. Many lined up on Pier 17 posing for photos but being strongly back lit there was not much you could do unless you filled the frame with their head to block out the sun. 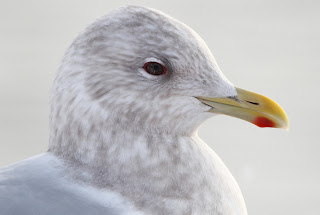 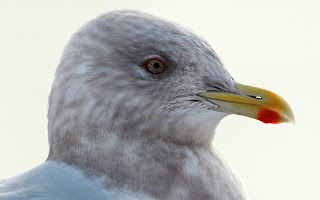 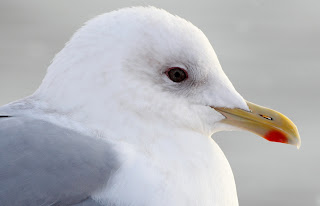 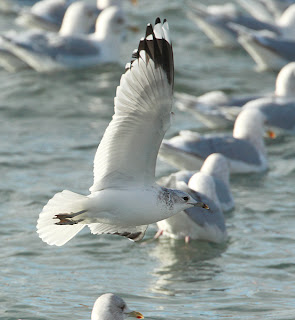 This is one of three Common Gulls using the Pier 17 sewer outflow.  Two have bills coloured like this one and the other has a more yellow bill with a dusky ring.  This bird has a band on left leg and is suspected of being a bird banded here last winter.

With so much birding concentrated on the lower Waterford River valley, Quidi Vidi Road and Roche Street looking for the warblers there, I wanted to check out other areas that could hold warblers. On Saturday covered the Waterford Valley up to Bowring Park. It was a good morning for birding but no warblers were found. A couple of Brown Creepers in Bowring Park was my only year bird.  Everyone and their dog  (literally) was looking at the very obliging Pink-footed Goose pulling up grass grass out of the snow on the banks of the duck pond. 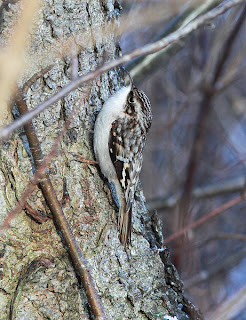 Bowring Park is one of the easiest places around St. John's to see the uncommon Brown Creeper.
﻿
Even Kelly's Brook was being neglected in the face of the warbler action in other parts of St. John's.  I gave it a good going over on Sunday and was sure there were no warblers there. The usual Belted Kingfisher and just a handful of teal but only one drake Common Teal were present. 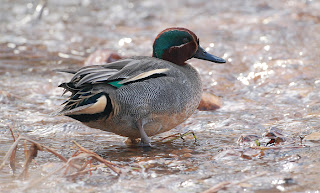 The teal at Kelly's Brook are among the tamest in St. John's offering close photo opportunities if you don't mind the deep shade under the willows.

Monday is going to be a tough come down after 16 days of good birding....

Posted by Bruce Mactavish at 21:33