In January Life is a Pond

Trying to squeeze out all the birding time around the 8 hour working day, which takes up 89% of the daylight period according to my calculation at this time of year, I went to ponds before work and during lunch break for maximum bird impact.  Before work went to Bowring Park for potential raptors chasing the pigeons and to check on the Pink-footed Goose.  The duck pond was 89% frozen after the last 48 hours of extra cold temperatures.  The masses of ducks were still at lowest energy output mode when I arrived just after the so called sunrise.  The sleeping Pink-footed Goose was easy to pick out among the Blacks, Mallards & Pintails.  It was keeping its nostrils buried in the feathers of it back. I imagine less air needs to be warmed by your body if the air you get comes from a warm air pocket buried in the feathers of your back. Those geese and ducks know what they are doing when they sleep with their faces buried in their backs. 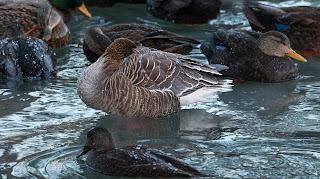 The Pink-footed Goose was still sleeping at sunrise along with most of the several hundred ducks at Bowring Park, St. John's. 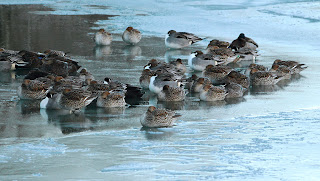 Northern Pintails and other ducks at the Bowring Park duck pond sleeping off the the cold early morning before the duck lovers arrive with bags of good food.


At lunch break  I sacrificed valuble free time to drive cross town for a view of Quidi Vidi Lake.  There were lots of gulls on the ice and bathing in the open pools of water off the Virginia River mouth. Without a scope only the closer gulls were scanned.  Still no SBGU.  Arrived at the west end of the lake just as an otter slithered up on to the ice with a big trout in its jaws.  I noticed Lancy Cheng already there with his binoculars pointed toward the otter.  I got out with my camera for a few otter photos. 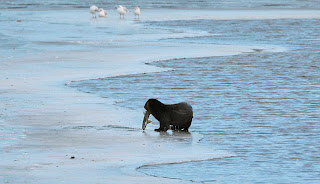 The otter gets out of the water with its lunch.  Perhaps it is already thinking about dessert looking over at four Black-headed Gulls.


Otters at Quidi Vidi Lake pretty well always start at the tail when consuming a brown trout.  It takes about the same time for an otter to eat a whole trout as is does a hungry human.  The otter eats it all.  A crow hoping for left overs got nothing. 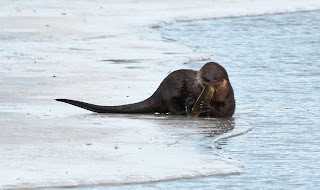 This trout would have been a good meal for a human.  Otters eat a fish like a pepperoni stick starting at tail and keep going until they crush the bones of the head into swallowable pieces..


The ducks at Quidi Vidi Lake get out of the water when an otter is sighted.  Last winter an otter was observed dragging a frantically flapping Black Duck under the ice never to be seen again.  This otter which is presumably the same animal as last winter, has a method for checking out the possibility of duck on the menu.   It dives under the ice and comes up within lunging range of the ducks on the shore.  Several time I've seen this happen and was ready with the camera but each time it pulled back under the ice.  It was probably only sizing up the situation for a later date. The ducks are eerily only partially aware that the otter is watching them from just a few meters away. 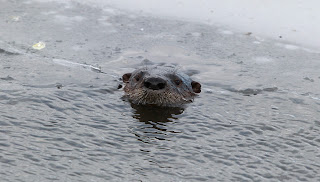 Slyly the otter pokes its head up from under the edge of the ice to look at the ducks on the shore only a couple of meters away.

The otter gets lazy and swims about in the open water  diving and coming up eating what I think are sticklebacks - lots of chewing but nothing visible.  Before I go back to work I start to naked-eye the ducks on the shore and see a GADWALL just sitting there as if it had been there the whole time.  Gadwall is loosing its rarity status in Newfoundland but seeing one in winter is still an event.  An otter to watch and a bonus bird for the winter list has to rank as a good lunch break.. 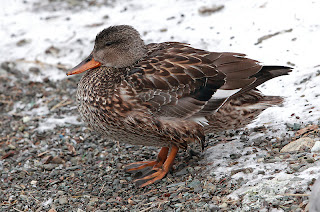 A little ragged around the edges this newly arrived female Gadwall at the well watched Quidi Vidi Lake will be enjoyed by the St. John's birding community.  There are one or two Gadwall found on the Avalon Peninsula in recent winters.  This is one of the very few females.