Cory's Shearwater occurs naturally and by will within legal Newfoundland waters, but just. Being a warm water species most of Newfoundland waters are non-Cory's habitat because of the overpowering influence of the unstoppable Labrador Current that sweeps strongly south and around Newfoundland affecting our everyday life. Warm Gulf Stream waters meet with the Labrador Current off southern Newfoundland in the deep water beyond the Continental Shelf Edge. I know from experience that Cory's Shearwater is part of the normal avifauna in warm water +19C  just off the shelf waters south of Newfoundland. and St Pierre et Miquelon - and well within the 200 nmi EEZ. And from good authority know that they occur up on top of the shelf a little bit adjacent to these deep waters. Cory's also occurs with some regularity on the southernmost Grand Banks in and outside the 200 EEZ. In adjacent parts of Nova Scotia Cory's is more routine of shelf waters but the water is also much warmer here in summer than Newfoundland. One year, perhaps abnormally warm, I saw small numbers of Cory's Shearwaters from the North Sydney, NS to Argentia, NF ferry. It was late August when water temps are at the warmest.  The Cory's started on the NS side of the crossing and continued in small numbers until south of St, Pierre et Miquelon. There has never been a duplicate result from that crossing but in recent years ferry crossings are done mostly during darkness.

Shearwater watching on the Avalon Peninsula during the capelin season is one of Newfoundland's great spectacles. Day counts from a single location are often in the five digit zone, sometimes six.  Great and Sooty shearwaters in varying ratios make up the bulk of the species. There are always a few Manx. After decades of summers enjoying the shearwater and the general seabird spectacle without ever seeing a Cory's Shearwater I assumed it was never going to happen.  Some birds like fulmars for example, scavengers of the sea and common in Newfoundland waters year round do not respond at all to the capelin spawning. Maybe Cory's Shearwater don't eat small fish (unlikely theory!) or maybe they just don't like getting their feet cold in the Labrador Current.

On 10 August 2014 thanks largely to lighthouse keeper Cliff Doran's luring I found myself at Cape Race for the 4th day out of the last six.  By the time I got there on Sunday afternoon most the shearwaters had floated offshore. Capelin feeding seems to quiet down in mid-day.  Not only that there were periods of rain and dark skies.  I was wondering if I should not have burned all that gas and time to be at Cape Race again. The seabirds still present were very close as there was some capelin being captured. After a couple hours of enjoying the views I was about to pack it up when I found myself looking at a shearwater flying away with a gray wash between the shoulder blades and on back of the neck. It turned back toward me revealing its full dirty neck and yellow bill. I knew what it was but also knew this couldn't be happening. Yet I was standing on solid ground looking at a Cory's Shearwater feeding off the Cape Race lighthouse.

For the next twenty minutes I had the bird in sight most of the time. It leisurely coursed back and forth 100-200 m offshore cruising over the other shearwaters and seabirds sitting on the water. Twice it hit the water getting a capelin though it never rested on the water. I was standing by the old fog horn building. Photo taken with 840 mm lens using ISO 1600 and 3200 under dark skies.  All here are large crops. 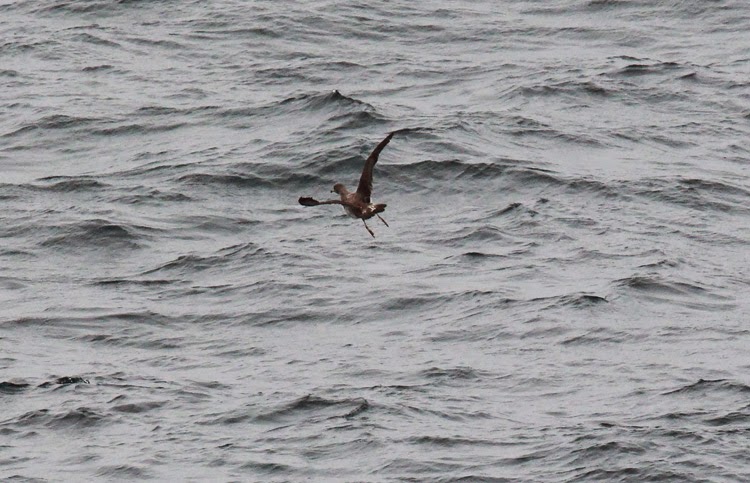 The first of 230 photos. Even if this was the only shot the solidly brown head and neck say Cory's Shearwater. 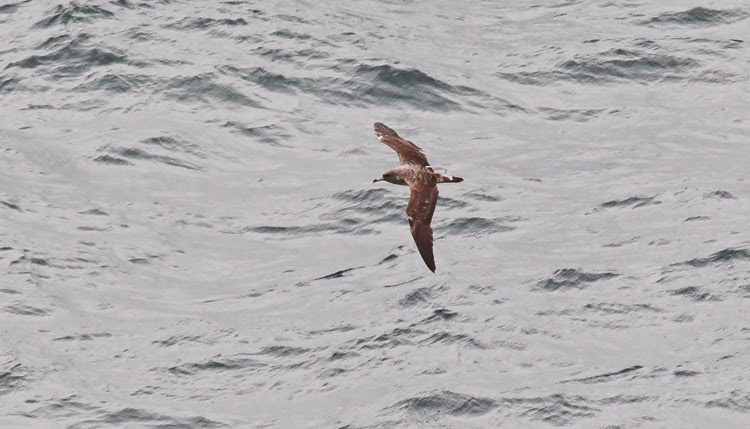 The grayish upper back and hind neck usually contrasted with darker brown wings.  This is often a good clue of a possible Cory's vs Great even at good distances.  In better light the grayish shown is actually buffy brown. 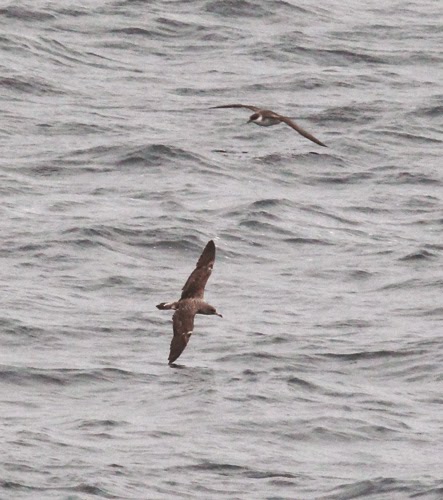 The bull neck, large head and bill are often impressive next to a Great Shearwater 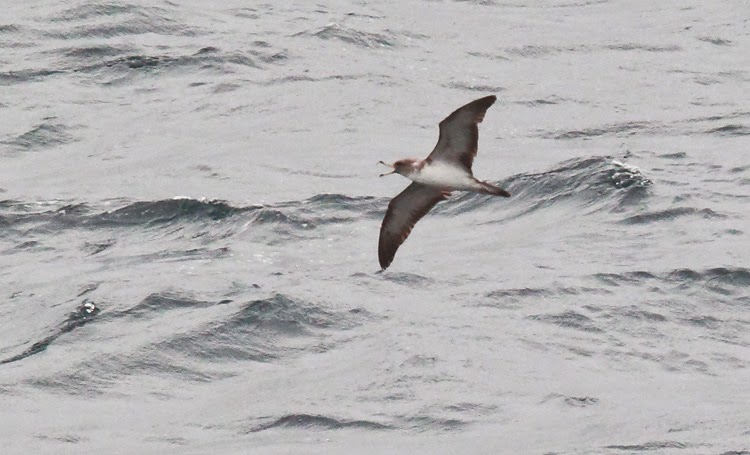 Wish I could have heard what the Cory's was saying as it banked showing its snowy white belly and clean white under wings. 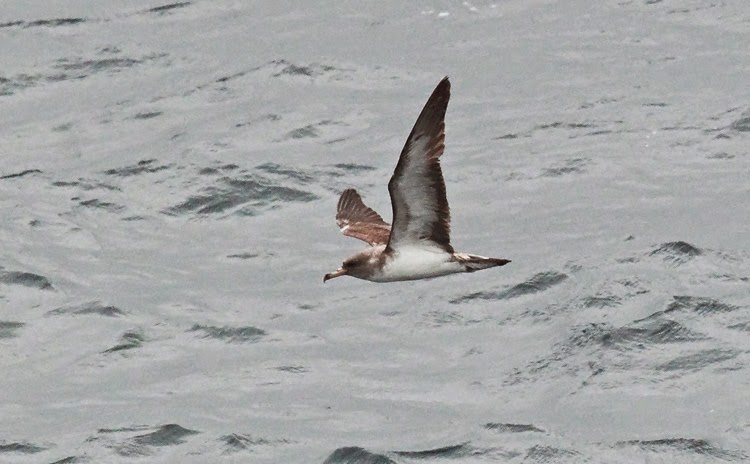 Another view of the white belly and under wings.  There is some moulting of under wing coverts spoiling the immaculate white under wings of a fresh Cory's Shearwater. 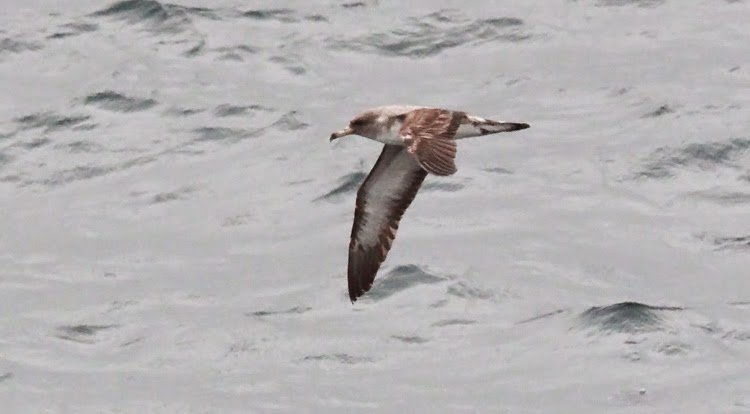 Pretty rough looking, the Cory's was undergoing wing covert moult.  The uniform dark underside of primaries rules makes it your basic Cory's Shearwater subspecies/species that includes the Azores as its breeding range. 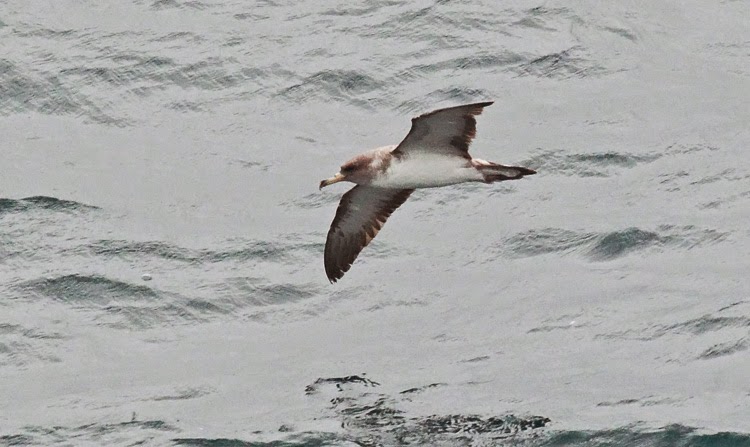 Another view of satiny white belly and if you hadn't noticed by now that stonkin' yellow bill with a black tip. 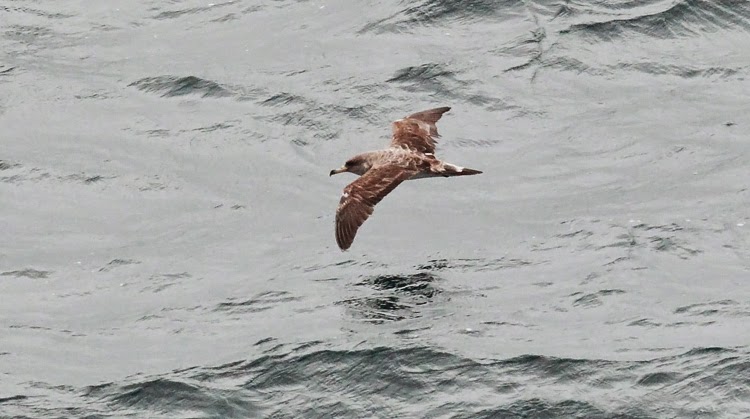 The Cory's Shearwater was a great glider. It moved slowly but surely often near stall out speed it seemed. Where as the Greats appeared pumped up on caffeine with frequent rapid burst of wing beats to keep airborne with more abrupt changes of speed and angle of movement. 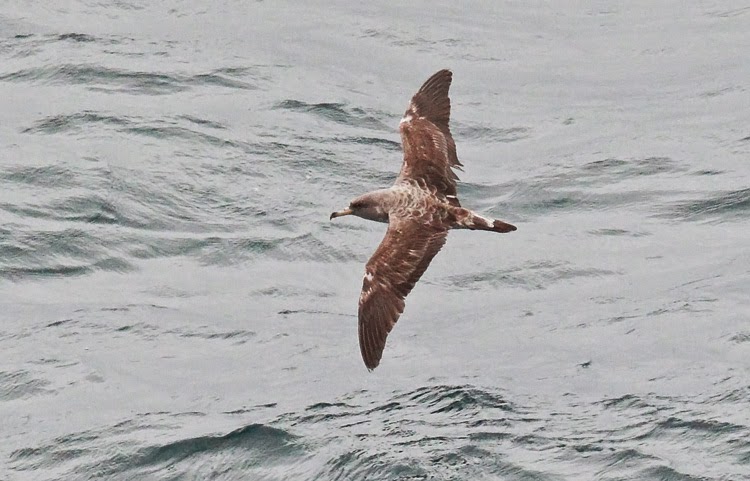 Compared to Greats, Cory's Shearwaters seem to have narrower rear ends and tails with thicker shoulders and wider wings. 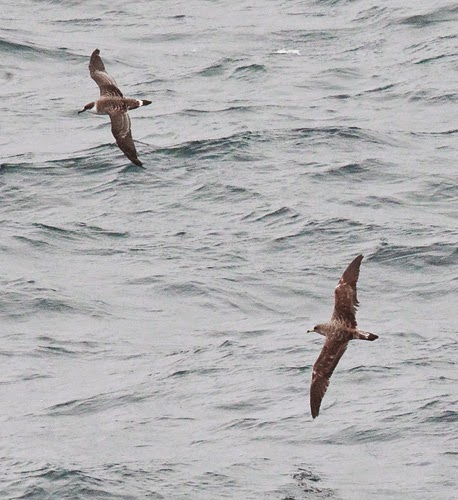 The paler upper back and neck contrast with the darker wings of Cory's. On Great Shearwaters the back is either darker than the wings like this individual or the same.  Right now the Greats are in or just about in a fresh set of wing coverts and back feathers. These are strongly edged in white, sometime including the back.  Depending on light and distant the upper side of both these species looks uniformly dark.

Posted by Bruce Mactavish at 01:00