St. Vincents terns in the Fog

Saturday birding around the Southern Avalon Loop was mostly a drive in very dense heavy wet fog.   The sunny weather, high temperatures and tropical humidity experienced farther inland was overruled by the cold ocean resulting in fog along the coast. With little to actually see, the tern colony at St. Vincent's became more interesting. The birds are nesting close to the road. If you are careful not to park too near a nest which could keep the bird from incubating, and you STAY IN THE CAR, you can have some excellent studies of Common and Arctic Terns with binoculars. If you have a big telephoto lens you can get some pictures. Whatever you do, do not walk on the boardwalk that was installed last fall.  This would cause much disruption among the colony. The boardwalk which seems totally out of place going from nowhere to nowhere is probably a good thing for the terns by limiting the ATV activity. A good thing as long as no one actually uses it for a walk!  There are more terns nesting there than previous years.

On Saturday there were several Arctic and Common Terns still incubating eggs. These must be birds that failed at a first nesting attempt. Will there be enough time to raise the young before fall migration? Some other terns were feeding recently hatched puff balls.  And there were a fair number of juvenile Arctic Terns already able to fly but still being fed by the adults. 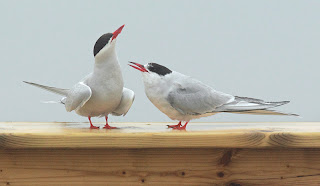 An uncommonly seen plumage in Newfoundland (bird on the right) is presumably a 2nd summer Arctic Tern (two years old).  The white forehead, black on parts of upper mandible and blotchy gray/white under parts are signs of immaturity.  It attracted this adult Arctic Tern to land next to it with some calls resembling food begging calls.  The adult has an unusual lump on the lower edge of the bill. 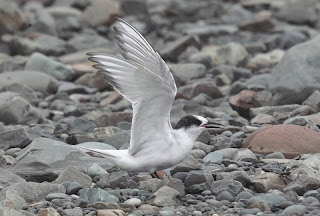 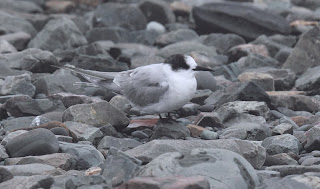 First summer (one year old) Arctic Terns are more routine in Newfoundland. A few usually loaf around Arctic Tern nesting colonies and this age group is regular in the offshore zone off eastern Newfoundland in summer. Common Terns in this plumage are less often encountered here but are also not so easy to identify. The larger bill and overall shape and sometimes darker carpal bar being the key marks.. 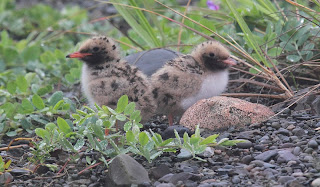 These Common Tern chicks were walking about and did not require the shelter from the dripping wet fog under the wings of the nearby parent standing on guard, but they must have been only a week old.  Will they grow quick enough to migrate south with the rest of its species in early September? 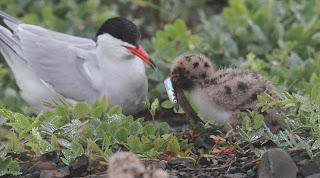 The sandlance being handed to this chick was longer than the bird itself, yet it was still able to swallow it whole and completely. 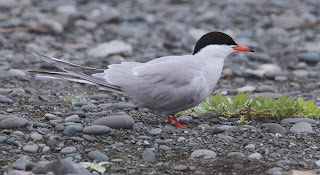 When in a mixed Arctic/Common Tern nesting colony the Arctics get all the attention from the camera but an adult Common Tern looks pretty good in the soft light under the fog.