Day 22 of 35 at Sea off eastern Newfoundland

Day 22of 35 aboard a seismic vessel off eastern Newfoundland. The days drag on. Time stands still. There is no beginning or end. Steak day on Saturday marks the weeks as they pass.  It is like waiting in an airport terminal for endless days for a flight to get you home.  Working as a Marine Mammal Observer/Seabird Observer my duties involve looking out the window from the ship’s bridge half of each daylight period (about 8.5 hours on watch each day). So far fog has not been a real problem though that is changing as we get into July notorious for fog.  Being one with a high need for visual avian stimuli every day I look at whatever birds I can see from my bridge window perch.  It is mostly Northern Fulmar, Great Shearwater and Leach’s Storm-Petrel - the Big Three.  These are the most common summer species at sea off eastern Newfoundland in the deep water beyond the continental shelf edge and much of the shelf waters as well.  As I look at my umpteenth Great Shearwater of the hour I chant to myself ‘you can never know a common bird too well’ and ‘you are not birdwatching unless you are looking at a bird’.  After a 5-6 week shift at sea I’ve looked at each of these three species more than any species on land over the entire year. 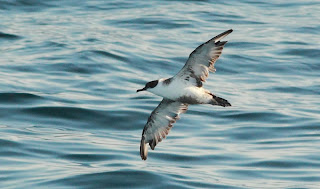 There are perk birds.  Jaegers and especially skuas are star attractions in an ordinary day.  In early summer there are small groups of subadult Long-tailed Jaegers.  These are camera targets when they come close enough. Sometimes they hang for a time in the updraft over the ship jostling one another around. So far they’ve been playing around the wake of the ship but not investigating the ship.  I’ve always said you can’t live on skuas alone. They make up only a minute or two on any day. And many days you seen none, however, they are the best ‘normal’ bird out here.  They can be photogenic if you are ready when they come by the boat. So far they’ve not been circling the boat much but just passing by once.  My photo collection of skuas has not grown much this trip.  So far on this trip I’ve seen 19 South Polar, 9 unidentified skua and no Greats.  Haven’t spent much time in the good skua areas where their target species, the Great Shearwater is abundant.
Five to six week stints on seismic ships is part of my job working for an environmental consulting company.  Since 2003 I’ve spent over TWO YEARS of my life on seismic vessels.  Most of it off eastern Newfoundland on the northern Grand Banks and the adjacent Orphan Basin – an area of several thousand square km.  The ocean east of Newfoundland once a faceless expanse on the map now has meaning. You learn a lot about where birds occur in relation to the oceanographical features on the bottom.  Knowing where you are on the map and seeing the birds around, gives you a sense of what it feels like to be in a particular part of the ocean even though it appears to be trackless water.  It is a rare opportunity to have all this first-hand experience and knowledge of a huge area of ocean off eastern Canada and become extensively familiarity with the seabirds of the NW Atlantic.   Is it all worth the two years at sea? NO!
Every 5-6 week stint at sea is a gap taken out of your life that you don’t get back.  You could be just as well off knowledge-wise with 20% of this amount of time at sea. Now I am talking about trips off eastern Newfoundland.  Seismic trips to places outside of the all too familiar Newfoundland are a different story.
For example two six weeks stints off NE Greenland at 78N to 80N in the pack ice in late summer was pure bliss from start to finish. I hated to go to bed for fear of missing too much.  Ivory Gull was daily, up to a hundred in day.  Felt like we were in the birthplace of Ivory Gull as a species. Watching Ivory Gulls in their domain was an enlightening experience even after plenty of Newfoundland Ivory Gull experience. Then there was the two weeks and 25 different white Gyrfalcons in Sept 2011. That was off the scale by all measures of birding experience. The NE Greenland seismic trips were priceless learning experiences.

One is never enough and there are never too many.  Ivory Gull is one of the most attractive species in the world.  There are almost too many to fit on this one little ice pan off NE Greenland on Sept. 11, 2011.﻿
The first of my two tropical seismic trips was four weeks in the Pacific Ocean off Costa Rica.  A whole host of new and exciting seabirds from the common Wedge-tailed Shearwater, to the rare Christmas Shearwater, to the exotic White Tern and the mythical Swallow-tailed Gull.  Every day was a good day on that trip. It ended too fast. 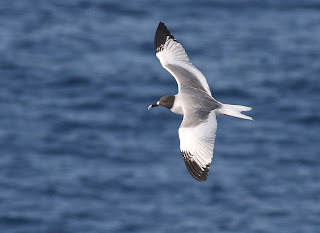 I was not expecting Swallow-tailed Gulls off Costa Rica.  Their long wings and slow floating wing beats like a frigatebird was not what I imagined for this amazing gull.  Most of the seven individuals seen were following the boat at night. This one on March 26, 2008
﻿
One more trip exotic location was the South China Sea south of Taiwan.  Seabirds were in lowish numbers but included some serious species for a Newfoundland birder like Streaked Shearwater (fairly common), Bulwer Petrel, Red-tailed Tropicbird and several Aleutian Terns. It was the spring land bird migration that kept that trip hopping.  We were surveying under a major migratory path of birds wintering in the Phillipines and probably as far south as Australia.  At night I tried to identify some of the masses of shorebirds attracted down low by the ships lights on foggy nights.  Great Knots, Marsh Sandpipers, Curlew Sandpipers were among the most numerous species identified.  Landbirds in daylight included some Siberian specialties like Eye Browed Thrush, Red-breasted (Taiga) Flycatcher Brown Shrikes and the ultimate bird for a ship mate – male Siberian Rubythroat. 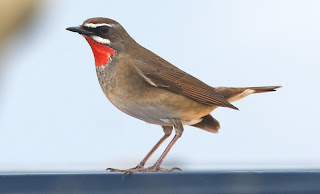 A picture is worth a thousand words. Siberian Rubythroat on seismic vessel in South China Sea south of Taiwan, April 16, 2009.﻿
Ok, break is over. Time for another two hour watch on the bridge and more of The Big Three.
Dream On….
Posted by Bruce Mactavish at 15:42