On 27 July at Renews there were a few shorebirds including four Semipalmated Plovers (SEPL).  One had a notably broad breast band. It was more than just pose, it was wider than average no matter how the bird moved. There was never any thought it could be a Common Ringed Plover (CRPL) but it shows how wide the breast band can be, in fact wider than some CRPLs.  Heat shimmer was a problem for photography but these three photos show the heavy wide breast band. 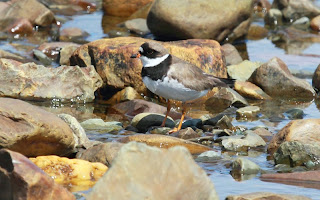 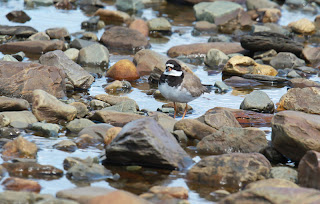 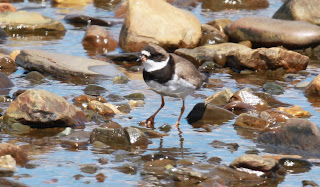 Three pictures of a Semipalmated Plover at Renews, Avalon Pen., Newfoundland on 27 July 2013.


The wide breast band on this individual might make one entertain the idea of Common Ringed Plover. The most obvious features eliminating the possibility of CRPL are the lack of white line above the black cheek patch, the presence of an yellow orbital ring (not so easy to see on this bird) and the white of forehead does not extend to eye. 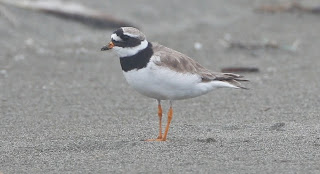 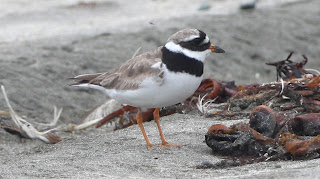 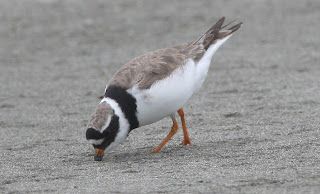 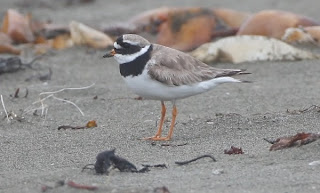 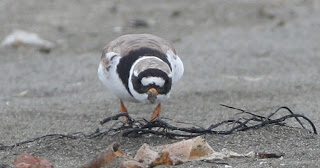 The five pictures above are of an adult Common Ringed Plover at St. Shotts, Avalon Pen., Newfoundland on 7 Aug, 2010 seen by Ken Knowles and myself.
The overall high contrast of the black head markings and breast band immediately give the CRPL a distinctly different look from the SEPL.  A real Ringed Plover is not just a different Semipalmated but feels like a genuine species.  The critical field marks are the lack of coloured orbital ring and white from forehead curling under the eye. The obvious white line above the black eye mask is a necessary field mark for CRPL but some male and many female SEPL have some sort of a pale line here as well. Other more subtle marks add to the overall jizz of the CRPL such as smaller white throat area and the white forehead patch being proportionately wider horizontally and narrower vertically.  The adult CRPL that have shown up on the Avalon Peninsula have all been rather pale above, with brighter more yellow-orange legs and a little bigger than adult SEPL.  An adult Common Ringed Plover really stands out if you know your Semipalmated Plover. While it has turned out to be semi-regular in tiny numbers on the Avalon Pen in August it is still a huge rarity and should always be documented with photographs.
Now is the time to start looking...