Bird Photography from a Car

It is Day 3 of my return to planet earth after 36 days at sea off the east coast of Newfoundland. Takes a while to get used to the lush green vegetation, the colourful roadside weeds in full bloom and the smells of soil.  To hurry the euphoric rehabilitation to land life I have been been birding full time around the Avalon Peninsula. For the first two days went to St. Vincent's Beach where a rare Sandwich Tern was seen the week before plus plenty of birds feeding on the spawning capelin. Day 1 was a rain day. Couldn't get out of the car.  Day Two was beautiful with no wind and light sun but the capelin feeding birds flocked off.  You can't win them all.  I was taking pictures of everything that moved. It was good to be back in the photography saddle again.  I realized that indeed I am sitting in the saddle of my Honda Civic for a great many of the pictures that I take.  All the following pictures were taken from the car with 840 mm of lens resting on a bean bag out the window. All but the gull picture. 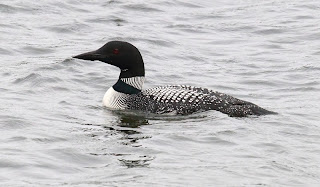 Avalon Peninsula Common Loons do well in summer with the abundance of capelin in the saltwater shallows. This one is sheltering near Forest Field, St. Mary's Bay 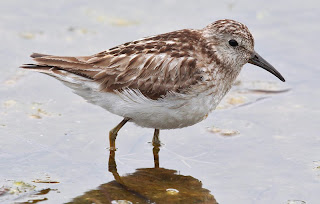 This adult Least Sandpiper at Coote's Pond is looking pretty frazzled after a hard work out on the breeding grounds on some Newfoundland bog.  It is time for a break. 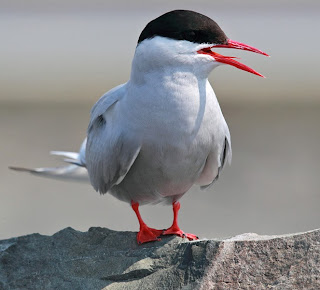 St. Vincent's Beach has been home to an Arctic Tern colony for years. It is a fragile existence being next to a busy road, along an ATV track and now a boardwalk has been built right in the middle of the nesting grounds.  The latter may turn out to be a benefit. It keeps the ATV traffic down at least. There were more terns there then I've seen in years. 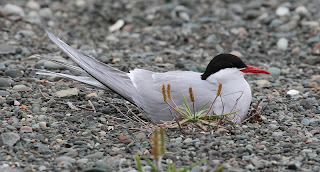 There  were a number of terns incubating eggs on this late date of 18&19 July.  Could these be failed breeders from this colony or another colony?? The ARTE colony at Pt La Haye beach is missing and the Renews tern colony was abandoned part way through the season.  Predators like mink can cause total disruption and abandoment of a tern nesting site. Meanwhile nearly fledged ARTEs were being fed by adults in this colony which is on schedule for a typical breeding season. 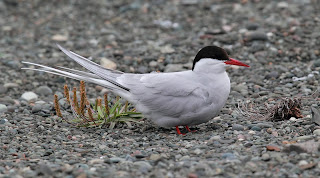 Arctic Terns are simply a beautiful bird. This one stands on guard near the nest in the above picture. 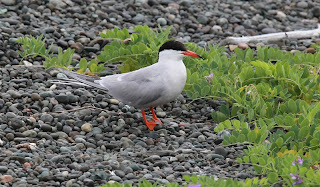 Arctic and Common Terns are an age-old identification challenge but a Common Tern is a completely different species when viewed at close range and still beautiful in its own way. 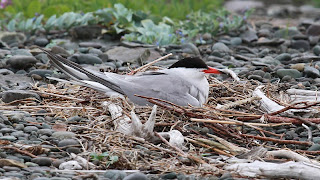 A few Common Terns sitting on eggs at this site normally all Arctic Terns fuels speculation that there was a late influx of terns from distressed colonies elsewhere. 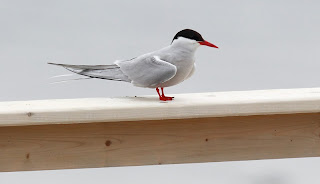 The Arctic Tern does not have to try hard to look good. Even when sitting on the unnatural railing of a boardwalk its finely tuned physical features stand out. 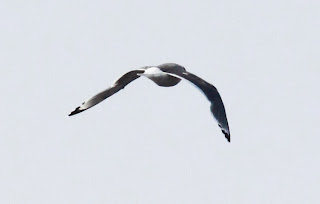 While waiting for gannets to plunge dive for capelin at the mouth of the Holyrood Pond outflow a full breeding plumage adult FRANKLIN'S GULL flew over my head.  I had my camera ready on a tripod but the autofocus had trouble making the connection until the bird had gained a lot of distance.  This is the best I got of this Class A rarity. But a rarity discovery wasted since it was possibly the same bird that was at Bay Bulls on June 8 only a couple hours flight away. 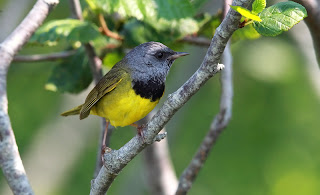 On the way home from tern watching nature called and I stopped by alders for some privacy, but this irrate Mourning Warbler was having no part of it.  It must have had young very near by.  I stayed in the car, took a few snaps and moved to another spot.

Posted by Bruce Mactavish at 16:20