At noon April 16, 2013 Cliff Doran found a Greater White-fronted Goose at Biscay Bay (east of Trepassey), Avalon Peninsula.  Early the next morning Ken Knowles, Jared Clarke and I drove the 1 hour, 40 minutes to the to site and found it right away. It was in the fields on the south side of road that are fenced off for a few cows in summer and a vegetable garden - in other words the first fields west of the big bridge.  The bird was very leery of our car as we stopped it on the road still 200+ meters from the bird. Generally it was wary of our car but got more used to us parked on the shoulder of the road as more traffic motored by on the road.  A large truck caused it to flush a short distance. We watched it for two hours from the car as it dug around for green grass in the largely brown field.  It stayed on the far side of the fields meaning photos were long distance and cropped a lot to show here.
The orange cast to the bill is a good sign for the Greenland race of Greater White-fronted Goose. There are other differences from North American races that I haven't researched at this point. The Greenland race is by far the most likely race to occur in Newfoundland & Labrador. There was already a pair at Twillingate for two weeks in early Apri 2013. Greenland White-fronted Goose is not quite annual in the province. A number of the previous records were from hunters in fall. Spring records are much rarer than fall. Nearly all, if not all of the fall birds have been immatures. 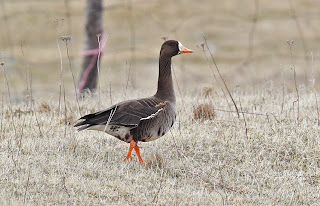 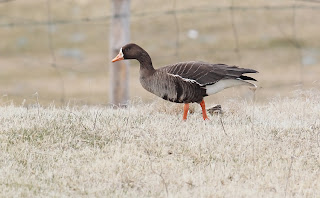 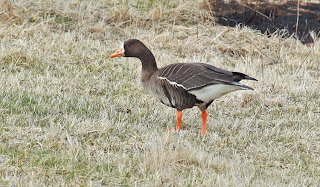 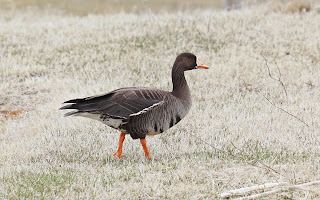 The above four pictures are the Biscay Bay, Greenland (Greater) White-fronted Goose on April 17, 2013﻿
﻿ 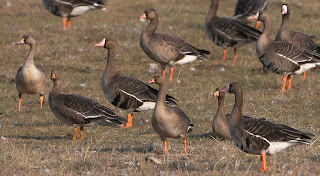 The last photo is a flock of adult (white faces) and juvenile (brown faces) Greater White-fronted Goose taken in late Sept 2009 near Red Deer, Alberta.  Note the pinkish bills of the adults. This is the type of Greater White-fronted Goose (A.a. frontalis) that breeds in the Canadian Arctic and is an abundant migrant through central Canada, with small numbers straying east to Ontario during migration.

Posted by Bruce Mactavish at 05:05