On April 17, 2013 en route to look for a White-fronted Goose, Ken Knowles, Jared Clarke and I found this American Golden Plover at Portugal Cove South in the roadside pools on the north side of the highway. It was in full winter plumage, with a dark cap and strong pale line through the eye and no hint of golden anywhere on the bird. We knew it wasn't a European Golden Plover, the most likely Golden Plover of spring, in Newfoundland.  Later also saw dark gray under wing coverts.  Wasn't really sure at the time why it couldn't be a Pacific Golden Plover but expected it show some kind of golden in the upper parts.
This was the fourth record of American Golden Plover during spring in Newfoundland & Labrador. All have been in a similar dull plumage and all late April/early May. Previous locations are Pt Amour, Labrador, Renews and Blackhead. According to THE SHOREBIRD GUIDE (O'Brien et al.2006) one year old American Golden Plovers are often in full winter plumage in April but rapidly attain a plumage close to breeding in early May.
Below are three photos taken in the dull light of early morning.  It is not a plumage we know this bird by during fall migration Aug-Oct through the province. All European Golden Plovers seen in spring in Newfoundland have been in breeding plumage. 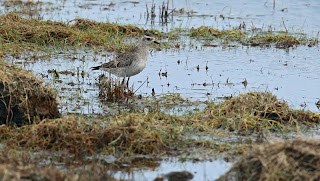 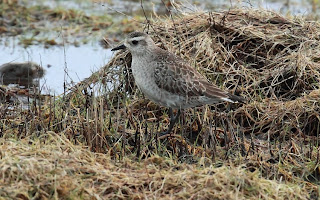 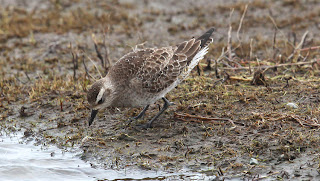 Posted by Bruce Mactavish at 04:21