Checking in on the Pink-footed Goose

The Pink-footed Goose has become a permanent fixture at Bowring Park, St. John's after it arrived during Christmas 2012. During the first week of its visit there was some concern that it would not be able to switch from grazing on grass to bird seed handouts.  After a week of digging in the snow for grass it began to accept seed handouts and thankfully the rest is a happy history. It survived the winter.
This morning (7 April) I went to view the bird for the first time in over a month.  Most Pink-footed Geese arrive on the Greenland breeding grounds in late April and early May I think.  This means our celebrity goose could depart at any time.  I wonder if its wing muscles turned to mush after a winter of hardly flying the length of itself.  It is a long flight north to Greenland from the Avalon. 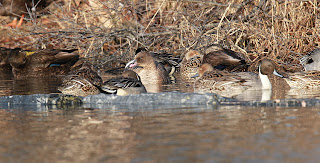 The Pink-footed Goose eyes me from its favourite loafing location across the pond. 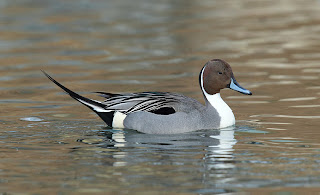 Most of the the Black Ducks have left the cramped winter quarters of Bowring Park. Dozens of Northern Pintail remain. The males were piping loudly and strutting their stuff. 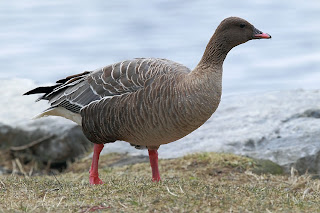 The Pink-footed Goose was enticed to swim across the pond when I started throwing out handfuls of bird seed.  The ducks got into a feeding frenzy but left after they thought all the seed was gone.  The goose remained and got an extra handful or two of seed.  I managed to back up far enough to get the whole goose in the picture. Is this good bye?

Posted by Bruce Mactavish at 15:18