Perfect Breakfast for a Bald Eagle

Diversions on the way to work in an office include Quidi Vidi Lake in east St. John's.  Anything is possible there among the gulls and ducks. It is easy to view birds from the car.  This Monday morning as I pulled into the Virginia River mouth parking lot about 07:20 there was the back of an eagle on the shoreline just visible over the trail.  According to the white feathers flying it was eating a gull.  It was very close, nearly full frame in the 500 mm lens but partly concealed behind a little rise of land.   It was just a matter of time before a walker came by on the path between me and the eagle so I decided to get out of the car before it was flushed by someone else. 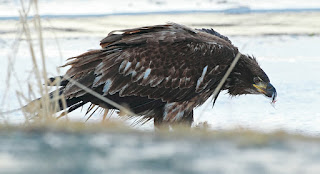 The top of the Bald Eagle was just visible from sitting low inside the car. 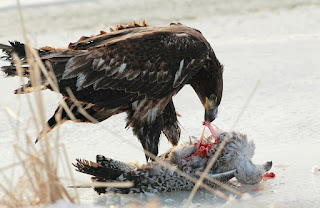 Slowly I opened the car door and  stood up. I could see the eagle was eating a first winter Great Black-backed Gull.  It was not that afraid of me as it gorged on breakfast without harassment from other eagles too wary to come in close to the parking lot. 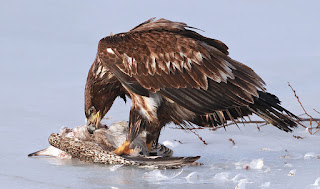 I walked around to get the low sun more in my favour.  Without tripod for fear of spooking the eagle I hand held the big 500mm lens. The 50 km/hr wind was catching the lens hood.  The eagle was surprisingly confiding. It was probably the best breakfast this eagle had had in a long time. 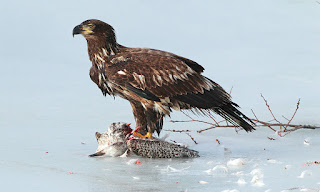 The eagle was aware of my presence but it stayed put as long as I moved slow.  When a passer by finally did come by the eagle carried the gull a little farther out on the ice. 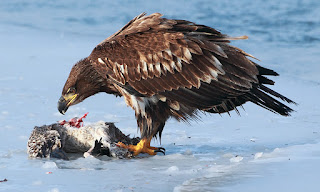 While dead gulls are scavenged as soon as they die at Quidi Vidi Lake, it is rare for one eagle to consume the whole carcass without plenty of fighting with other eagles. This bird enjoyed the whole GBBG in peace because it could handle the human presence.

Posted by Bruce Mactavish at 05:17