Just after sunrise on Friday Feb 1, 2013 I came across a flock of Bald Eagles on the ice at the west end of Quidi Vidi Lake. Nineteen in all. The centre of attraction was one dead Great Black-backed Gull.  There was not enough to go around so it was survival of the biggest.  A notably larger bird, a white backed immature, consumed most of the choice breast meat, but it was not breakfast at Tiffany's.  There was constant squabbling, screaming, swearing and hooting from the hungry spectators that wanted their share.  When the breast meat was consumed the carcass passed through the claws of several birds and ended up being carried to the other end of the lake where a few eagles licked the bones. 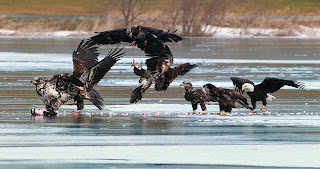 But it was anything but calm as the hungry eagle spectators were sitting on edge waiting for any break in concentration of the bird in control to steal their share of the food. 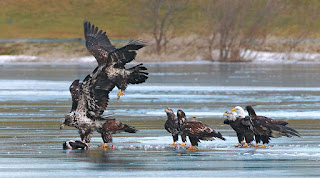 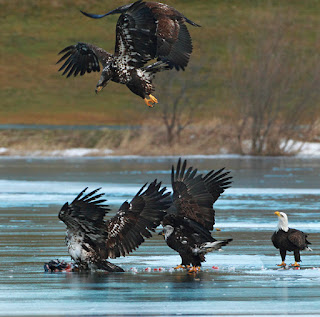 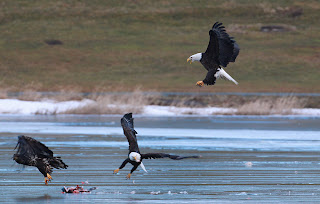 Posted by Bruce Mactavish at 00:27