A Weekend of Ducks and Seals

Birding begins to get pretty routine in late winter.  You start doing the same things over and over but if you keep going out there will be surprises.  Saturday was a  duck day for John Wells and I checking out places as far west as the Isthmus and Clarenville. It was nice to see the hybrid drake  Tufted x Ring-necked Duck at Clarenville.  The sun glare was too bad for killer photos still needed of that bird even though this is the third year it has been here.  A massive flock of 1,050 Greater Scaup along with 135 Common Merganser crowded in the open water at Shoal Harbour was an impressive sight but not easy to capture with a 500 mm lens.
With time on our side we include a side trip to Spaniard's Bay to look for the Barrow's Goldeneye which was easy to find.  As always quite far away for photos. 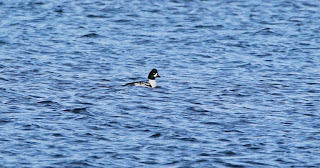 The Barrow's was a nice view through a high powered scope but required a big crop when viewing photos.
Also at Spaniard's Bay was group of 18 Eurasian and 3 American Wigeon feeding in the tidal shallows.  That is the kind of ratio we like to see. Lots of nice drakes too.
We took a shot up to Harbour Grace.  Two of the three hybrid American Wigeon x Mallards were accounted for. And they came to bird seed with the Black Ducks and Pintail. Interestingly the American Wigeon present did not.  Wigeons rarely eat bird seed in Newfoundland.  I guess it was the Mallard genes in the hybrids that gave them a taste for bird seed. Got some more photos. ﻿ 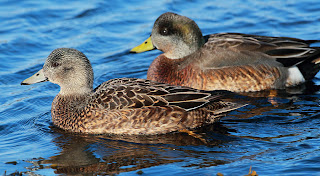 The female hybrid up close and the drake hybrid out of focus in the background. Do sibling ducks ever mate?  These two kept close to each other. 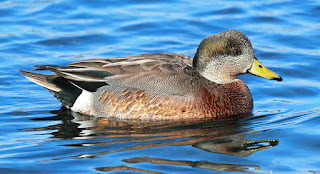 The drake hybrid American Wigeon x Mallard at Harbour Grace.  This drake and two females appeared in fall of 2011.  They appeared to be all from the same brood. 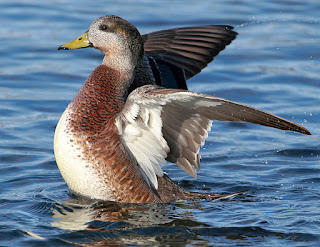 The drake rears up and flaps wings showing underside of wing but poor view of the speculum which is bluish with a thin white trailing edge.
We rounded the bottom of Conception Bay seeing 15 Bufflehead at Avondale and plenty of  mergansers and goldeneyes along the way.  We pulled into Holyrood where some seals had been present recently on the ice within the boat basin.  They were still there along with about 20 people taking pictures. Some of the seals were very tame.
The smallish seals I misidentified as harbour seals until later seeing the pictures. They were in fact 1 and 2 year old Harp Seals.  But there was a surprise there. A tiny pocket size seal with silver rings on the back. A RINGED SEAL. While regular on the Northern Peninsula they must be fairly rare on the Avalon.  It was a first Avalon sighting for JW and I.
﻿ 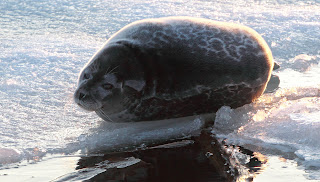 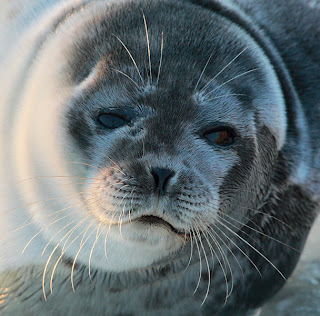 This Ringed Seal was extraordinarily tame beside a wooden platform.

The sun was setting over the hill as I tried to get pictures of the tiny Ringed Seal facing away and in the glare when behind it a huge animal pulled itself out of the water on to the ice.  Incredibly it was a BEARDED SEAL.  We see these from time to time in winter on the Avalon but the moment it chose to appear couldn't have been better. 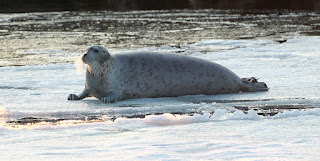 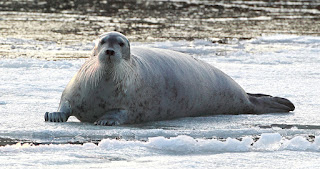 A Bearded Seal is a huge animal with Texas sized whiskers.  The spotting on this individual probably means it is a sub-adult.

On the next morning (Sunday) I visited Holyrood again hoping for more photos with more daylight.  The Ringed and Bearded Seal were not there. But there was an adult male Harp Seal and about 20 sub-adult Harps.  I got my pictures in the heavy overcast before a small army of seal watchers came by and scared half of the seals back into the water.  The little bit of remaining ice was also drifting away with the wind.  I suspect there will be no ice in the boat basin after tonight's storm and probably no more seals to see. 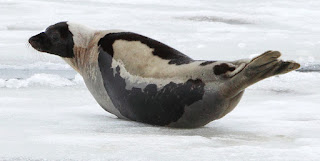 The adult Harp Seal is a striking looking animal up close.  The wet fur that was rest on the ice is a difficult colour and texture than the dry fur.

Below is s series of photos of the sub-adult Harp Seals. Some so much smaller than the adult I assume are 1st years and others just a little larger were perhaps 2nd year seals. 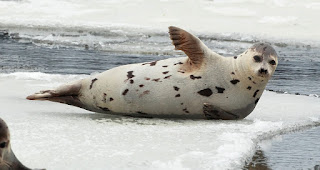 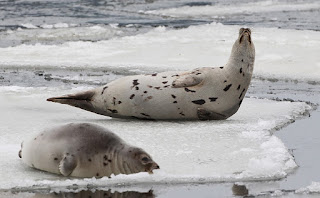 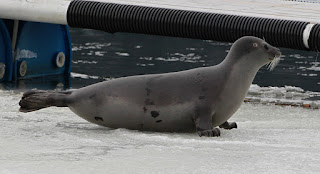 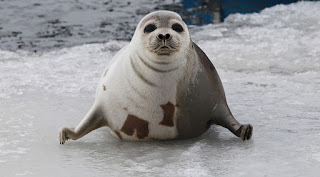 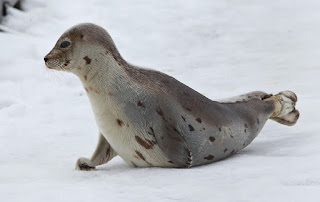