The weekends birding around St. John's get pretty repetitious by late February. But really we do have a lot to look at compared to anywhere else in Newfoundland.  We take our interesting birds for granted because we can see them so well at will. To save Saturday I decided to take close up shots of some of our interesting common birds. 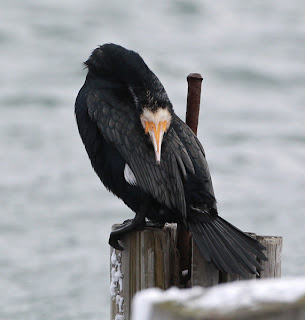 Great Cormorants have been in breeding plumage for a month now.  The throat gets whiter and the flank patch appears.  This was preening at Harvey Wharf. 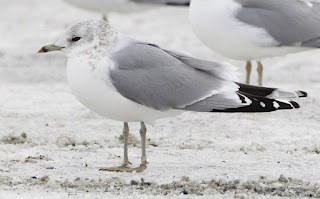 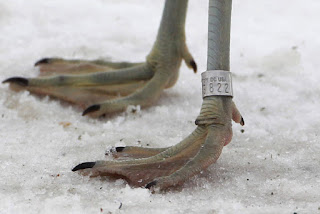 There have been up to four adult Common Gulls present at Pier 17 outfall this winter. Lately they have been loafing at the Virgina River parking lot at Quidi Vidi Lake where there were three Common Gulls today.  This bird was banded last winter in St. John's by Dave Fifield (CWS).  It was in 2nd winter plumage then. So we know this bird is now in its third year. It will be interesting to see how long it lives. 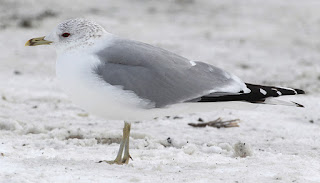 Common Gull # 2. The orbital rings on the Common Gulls are just starting to turn red. But the bills and legs still in full winter colours. 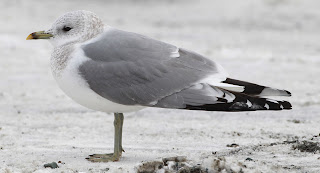 Common Gull # 3.  This individual is a little darker than the others with a more heavily streaked head.

The Tufted Ducks are doing well at Burton's Pond now that people are allowed to feed the ducks again. They are still pretty hungry. There are a lot of ducks to feed there.  Impossible to count now among the mixed duck flock but it looks to be about 50 Tufteds. 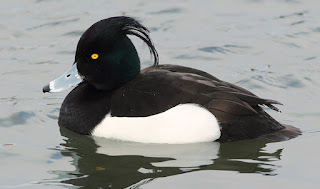 This drake Tufted Duck had an extra long crest. 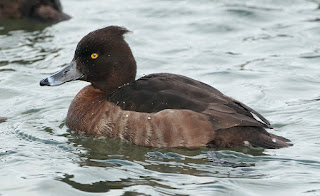 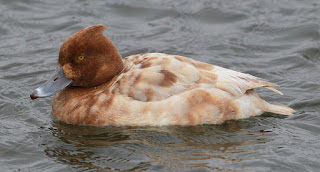 A non-typical female Tufted Duck.  This leucistic individual has been with us since November. 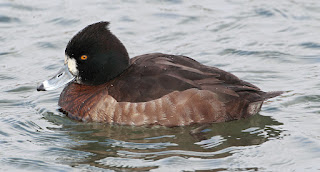 This female Tufted-like Duck is probably a hybrid Tufted x scaup. There is too much white around the bill, especially for late winter. There is often white on the face of young Tufteds when they arrive in October and November.  There is also an odd green sheen on the side of the head and a strong white ring around the bill. This bird has been present since fall.