The N and NE winds started Feb 25 and are forecasted to go until at least March 3.  A full week of  strong Northerly winds in late winter is going to do something interesting in the bird world.. With the pack ice crowding the NE coast south to Cape Freels an influx of eiders has already been experienced.  Years ago prolonged NE winds in late winter resulted in large numbers of very tired Thick-billed Murres in every cove on the Avalon for a week afterwards. But let's not beat around the bush here. It is Ivory Gulls and Gyrfalcons we want.
Jared Clarke had a GYRFALCON inland over the back bone of the Avalon between St. John's and Portugal Cove on Feb 26.  And yesterday an IVORY GULL actually did appear at Quidi Vidi Lake at noon yesterday.  A big thanks to Lisa de Leon for alerting me to the bird as it was there barely five minutes before it flew off the east end of the lake and has not been seen since.
Ivory Gull events involving multiple birds are rare on the Avalon Peninsula.  Since I've been here 1982 I can think of just four maybe five big events - two (three?) in late January, one in early and one in late April. So we don't have a lot of information to go on.  Is the bird at QV Lake the forerunner of something really big?  We are hoping. And in a couple minutes I will be getting in my car and driving to Seal Cove, Conception Bay to watch for potential storm trapped sea birds (including the white one).  Anticipation is huge.  While zero is a realistic possibility, multiple Ivory Gulls is highly possible. Ian Jones will be in Holyrood and other will be around town. Lets see what happens. 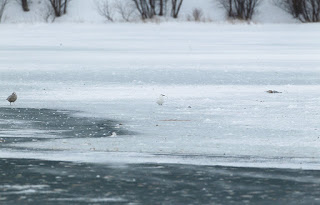 Adult Ivory Gull on the ice at Quidi Vidi Lake for only five minutes at noon on 27 Feb 2013. 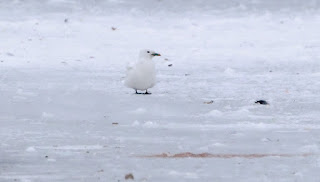 No Ivory Gulls reported as of 10 am. Checked out likely locations on the east side of Conception Bay (Seal Cove to Topsail Beach).  Winds will continue NE until at least Monday now but the winds will not be very strong. The Marine Forecast says NE 25 knots every day (about 45 km/hr).  The persistent wind from this direction will help bring the ice to the Avalon. When the ice is here water gets restricted and big concentrations of eiders can happen. The Gyrfalcons hunt in the pack ice. Fingers crossed.  Ivory Gulls maybe.  When there is ice they have freedom to travel far offshore.  They are a sea bird.  The best Ivory Gull numbers on the Avalon Pen usually happen when there is no ice in sight.  However let's not get greedy, there could still be a few Ivory Gulls if he ice comes.  Persistent NE winds might push them near shore.  Who knows what will happen?

The ice map dated 27 February 2013.  Ice should start coming around Cape Bonavista by the weekend.
Posted by Bruce Mactavish at 01:39