Sometimes you almost don't want to see a late empidonax flycatcher. In Newfoundland where only the Yellow-bellied Flycatcher is common we lack extensive field experience with the other species. On Monday Paul Linegar and I were birding the Southern Shore when Paul found a empidonax flycatcher at Renews. It was in the most unlikely of places for a vagrant bird - in the black spruce and larch trees backing on the main shorebird beach. We spent nearly two hours trying to get views of the bird in the thick tangled stand of 'trees'. Getting views was tough and a photo seemed an impossibility but I got lucky and managed 15 shots in a matter of five seconds shooting through a myriad of branches with the bird back lit. Pure miracle the bird is in some kind of focus.
We think it is a Least Flycatcher because of the squat little size of the bird, bold eye ring, bold white edges to the tertials, short bill with mostly yellow lower mandible and short primary projection. The back was grayish with a slight greenish tinge. The breast was white-ish with a pale gray 'vest'. It wagged or flipped its tail constantly. It didn't call much but Paul heard it give a few 'whit whit' notes. 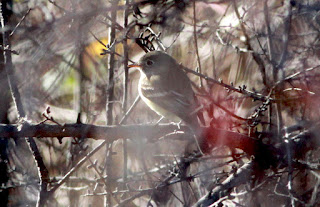 Is it possible to know from these photos the bird is not a Dusky Flycatcher? Does anyone reading this blog have an idea on identification? 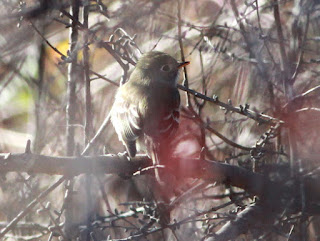 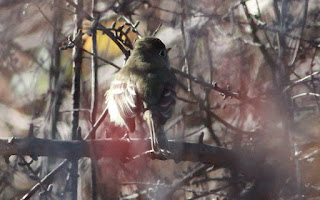 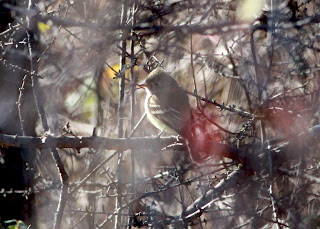 Other birding during the day turned up a late Blue Grosbeak at Bear Cove.  We concentrated on the Renews to Cappahayden area during the morning and early afternoon.  Lots of junco activity. one Tree Sparrow and a Lincoln's. A movement of White-winged Crossbills plus one Common Redpoll.  No warblers or other vagrants until lucking into the Yellow-throated Warbler near Anne Hughes' house just before dropping PL at home thanks to seeing Mark Maftei standing on the side of the road with binoculars.﻿
Posted by Bruce Mactavish at 23:02