Saturday's forecast of high west winds was not enough to hold back weekend birders. Ian Jones, John Wells and I started at Cape Race just after dawn. There was good numbers and a nice mix of seabirds feeding on something off Cape Race. There were several hundred Great and Sooty Shearwaters milling about, scores of Razorbills and Common Murres on the water, smaller numbers of Thick-billed Murres, Dovekie and Black Guillemots, kittiwakes and plenty of gannets. Also two minke whales.
Wind made passerine birding difficult. The west side of Trepassey was partially protected from the wind. We spent some time birding the roadside alders. There were plenty of juncos and chickadees and we didn't come up completely empty handed finding a late Red-eyed Vireo and a moderately rare Pine Warbler. The Pine was with juncos by the Welcome to Trepassey sign at west entrance to town.
We tried other alder beds toward Bear Cove without any other unexpected finds. 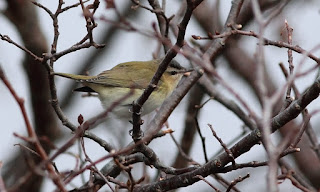 Red-eyed Vireos are routine in the Avalon alders Sept-Oct.  Any in November are considered late. This one looked a little scruffy and exposed in the naked alders. 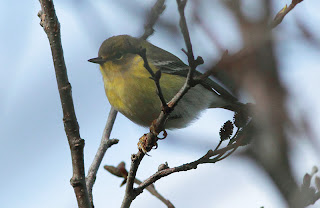 The male Pine Warbler is the fourth individual of the fall on the Avalon Peninsula.  This is about par for one season.  The brilliant yellow is clouded out by numerous twigs between the end of the camera lens and the warbler.  ﻿
﻿
Posted by Bruce Mactavish at 02:43