My work location (Long Harbour) combined with heavy rain cancelling the work resulted in me getting some free birding time on the Isthmus of Avalon and Clarenville. It was good to check out these poorly covered areas but there were no surprises this time. Clarenville is definitely too good to be left unbirded. The concentration of ducks in the area of Clarenville, Shoal Harbour and Georges Brook is too important to be ignored. Today I kept a total count. I know the geese were missing and birds like Common Merganser and Common Goldeneye which become numerous later in winter also avoided my view.


The lack of Mallards and pintails, both common among the ponds in St. John's, shows a more true picture of the relative abundance of these ducks throughout the island of Newfoundland and pretty much Labrador as well. There were domestic Mallard-like ducks present at one place where people throw bread to the ducks, but nothing I thought was a wild Mallard. 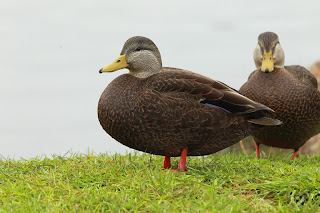 The unmarked bright yellow bill identifies the sex of this American Black Duck as a male. 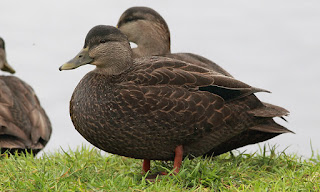 There are three Tufted Ducks among this group of Greater and Lesser Scaup by a  favoured sewer outflow in Clarenville.  The flat topped squared off head and more solidly dark back are distinctive Tufted Duck traits.  The immature Tufted Ducks in fall may or may not show a trace of a tuft on the back of the head.  Can you find the three?