Yesterday Lisa de Leon found a Brant at Flatrock. Newfoundland is well east of the narrow route of Brant migration from the Arctic to the US east coast. The western end of Bay of Fundy (Grand Manan Is, NB and Cape Sable Is, NS) are on the edge of the travel corridor. Another population of Brant migrate from the Canadian high Arctic to Ireland. One of these birds banded was shot in Newfoundland a few years back. So it is difficult to know where a Newfoundland Brant comes from.

Today I saw the Brant feeding on a green coloured algae growing on the flat rocks sloping into the sea. There is no guarantee it will survive the hunting season in this area especially if it gets flushed away from the beach which may be too close to houses for people to hunt. 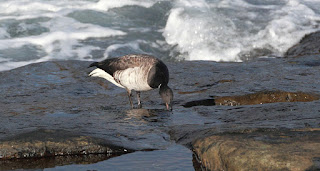 The Brant was grazing on a green coloured algae growing in the tidal zone. 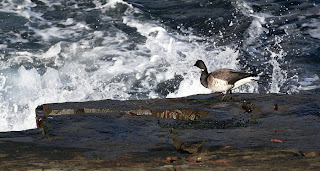 Oh-oh, the sea is receding, does this mean a tsumani? . 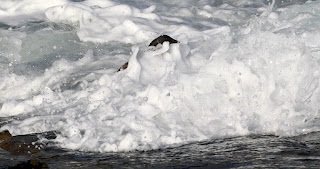 I hate it when this happens.  Yet twice the Brant took a tumble being caught in a wave.﻿ 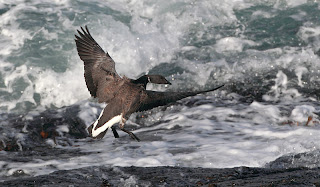 That was nothing, lets do it again. 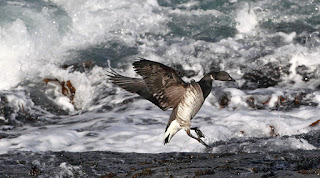 And on the very next wave it did happen again.  There were fairly big seas today. The algae it was feeding on is available only a low tide but was still being immersed by the bigger waves when I was there.
﻿