Calm and misty with +16 C on 9 November in St. John's is magical warbler hunting weather. Had the day off work. Spent four hours in east St. John's checking out the proven good areas for November warblers (lower Rennies River, Winter Ave, Kelly's Brook and Forest Ave). I found just one warbler - a Yellow Warbler with chickadees at the lower end of Rennies Mill Road. A Blue-gray Gnatcatcher partly made up for the paucity of warblers. It started out at Kelly's Brook which is still a jungle of green leafy willows. Lisa de Leon appeared and we followed the gnatcatcher for maybe 45 minutes all the way over to Pringle Place. And I followed it back to Rennies Mill Road. Perhaps it went back to Kelly's Brook. The gnatcatcher was with 3 Black-capped Chickadees when first found. But the time I left it, it was with a flock of ten chickadees. Following the flock as it cruised through the private properties was like follow a fish net for warblers. Any warblers in the area would be inclined to join in with the feeding flock. Except for the Yellow Warbler present for just ten minutes no other warblers appeared. However, Paul Linegar also on the lower Rennies by the 'Big Willow' had three warbler species - Nashville, Wilson's and Orange-crowned. I went through this are twice without detecting a warbler. There are still lots of leaves on the shrubbery. Just goes to show how easy it is to miss birds in yards where you cannot go. What else is out there? Well there was a Rose-breasted Grosbeak also.
Let this be the start of the snowball as people go look for the gnatcatcher and these warblers. Other birds are there to be found. The riches of the Waterford Valley remain untapped.
A quick trip to Pier 17.  Not many Iceland Gull crowding out the sewer outflow making feeding conditions good for the Black-headed Gulls. There were about 80 around the outflow this afternoon. No Bonaparte's or Common Gulls.  One juvenile Lesser Black-backed Gull. 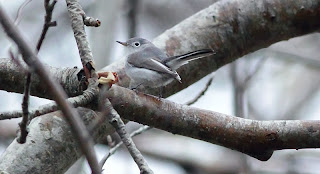 The Blue-gray Gnatcatcher was far more routine as a vagrant to the Avalon in the 1980s & 1990s. Now it is easily missed on the year list of even the most active vagrant hunters.  It is no stranger to November in St. John's.  They do well feeding on tiny insects and aphids even in cold weather up to early December.  It will probably hang out with the chickadees for a few weeks yet. 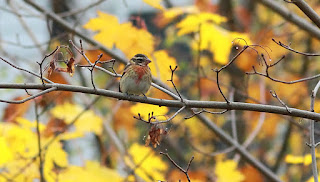 It has been a good autumn for Rose-breasted Grosbeak on the Avalon Peninsula. They regularly occur in November but usually leave before December 1st.  This one was feeding on the berries of what looked like Deadly Nightshade. 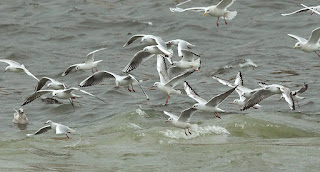 Black-headed Gulls were numerous at the Pier 17 sewer outflow.  About 80 were actively feeding around the outflow this afternoon. Later the sheer volume of Iceland Gulls will make it more difficult for the Black-heads to access the `food`.﻿

A crisp looking juvenile Lesser Black-backed Gull sneaked in among the Iceland Gulls for a few morsels of `food`.
Posted by Bruce Mactavish at 17:43