Not easy following up on every Gyrfalcon sighting.  Usually it is too late to go look for a reported sighting by the time it is reported. You pretty well have to be within a couple of minutes away when one is sighted to have any hope of seeing it.  You can get your spirits down going out every chance you get to the prime Gyr sighting areas looking for your own sighting and coming up empty time after time.  Things changed for many people on 11 April when the Bay Bulls (Long Pond) killed a Herring Gull on the ice and stuck around most of the afternoon to eat it.  Thanks to Jim Walsh for keeping tabs on this bird over a  few days.  I could not handle the pressure sitting in an office knowing a white Gyrfalcon was presenting itself so nicely and bolted from work for an extra long lunch. Thing worked out. Below are some photo results. 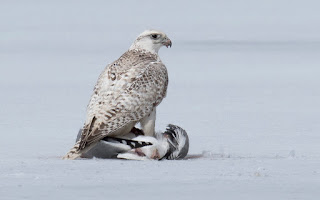 A dirty well marked white Gyr. More of a Silver Gyr.  It is a Code 3 on the Mactavish Code of White Gyrfalcon Ratings. A Code 10 has an immaculate white head, body and tail with white comprising of more than 50% of the upper surface of the wings. The Cape Spear bird (see previous post) was a solid Code 9, nearly a 10 if it wasn't a for few flecks of dark on the side and back of head and flanks. 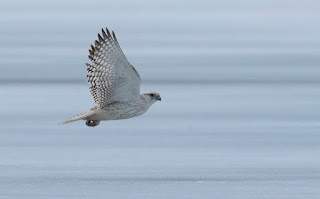 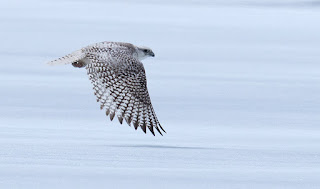 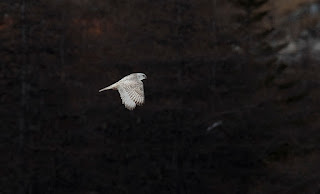 Did not know Gyrs were so agile and quick on their feet until I saw this one quickly walking toward its dinner on the ice that it had killed 20 minutes previously. 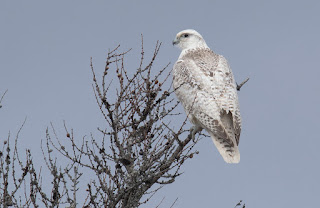 The air was clear without distortion allowing for big magnification and a major crop on this image.


Sightings of a white Gyr at Bowring Park, one on a building in downtown St. John's and two sightings at Quidi Vidi Lake may be the Cape Spear bird or possibly a different bird.

WHY IS THIS HAPPENING?

You can't google this question on the internet. Over the decades there has been a distinct pattern of an increase of of Gyrfalcons (and often Snowy Owl) in late winter 20 March - 10 April. It is not evident every year and it has been a good while since it has happened with Gyrfalcons. Disregarding this trend but probably connected I have this theory in a nutshell the current Gyr influx. Prolonged, very prolonged, cold far reaching NW winds along entire Labrador  coast and eastern Newfoundland through February and into early March helped more Gyrs drift into Newfoundland waters.   Gyrs  are perfectly at home living out on the pack ice during the winter and feeding on seabirds .  The Gyrs might have made their way back north mostly unnoticed except that in late March the ice off Newfoundland quickly disintegrated until there was nothing but a narrow strip of ice running off the tip of the northern Peninsula. This all happened quickly due to powerful westerlies beating up the ice etc.  So my theory says the Gyrs wintering at sea had to head to land in late March. Still winter in their minds the Gyrs didn't have to go back north yet. Once they hit the coast their search for food found some of them going farther south. The Avalon acts as a catch bag, the Cod End, they can't go farther south. But they are finding food here.  Lots of nesting kittiwakes coming back to the nesting colonies - prime meals for Gyrs. And Herring Gulls. The gyrs are getting Herring Gulls as well and they are abundant on the northeast Avalon at least.

This is my theory. In past decades when there has been this late winter Gyr influx the sightings stopped around 15 April. It doesn't feel like it is going to end that soon at this point. We will see what this weekend brings.  GYR ON!